Yesterday I hinted at more possible arrests as elections near. You don’t actually have to be a rocket scientist to figure that one out, but what it is interesting, though, is the fact that these arrests have little or no effect on public opinion polls. Or don’t they? If one looks at it from the perspective of an increase in public support for the rulling party then arrests (or more broadly speaking – the war against tycoons) have failed to deliver. But what if we are looking at it from the wrong perspective? 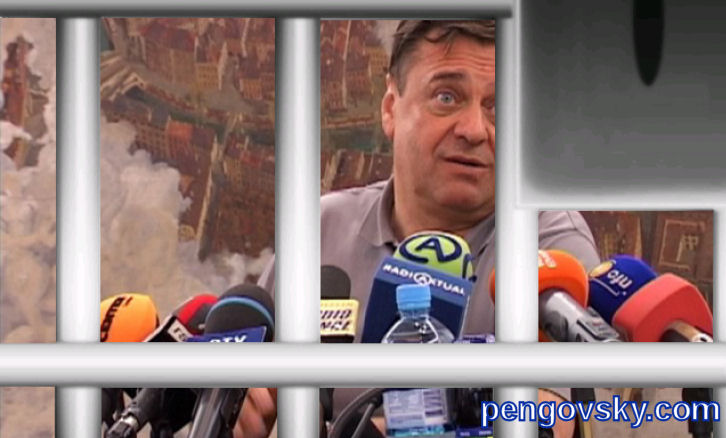 A sight many would love to see

Janez Janša and his SDS won the 2004 elections by a handsome majority mostly on a ticket of radical socio-economic reforms combined with good old anti-communism and xenophobia. He also promised to achieve a lot of very specific goals (one of them being the regional legislation). However, he failed to deliver on most counts. He failed to deliver to his own electorate. Pengovsky knows for a fact that a lot of his voters are down right disappointedd at today’s lack of a revolutionary fervour which Janša radiated just prior to 2004 elections. So what if Janša is not really looking for a bump in polls but is rather trying to keep his existing polls from going into a freefall? His and his people’s persitency in rounding up the usual suspects and putting them behind bars – even is only ever so briefly – suggests that these moves are yielding political results. And if no result is visible, it must be by design. War on tycoons and accompanying arrests are not meant to increase Janša’s popularity, but to prevent it from decreasing any further. This also suggests further arrests are highly likely. The question of course is – who’s next.

The obvious answer would be Laško Brewery CEO and majority stake-holder Boško Šrot. In Janša’s mind he undoubtedly has a lot to answer for, since the two got along really nice at first but it turned out that Boško was playing an angle and snatched Delo newspaper from Janša’s hands, depriving the PM of a very handy PR tool – and making 1,6 bln euros in the process while acquiring Laško Brewery.

However, Boško Šrot is only a secondary target in this case. Sure, he is worth a truckload of greenbacks and people in Slovenia generally hate other people who do better than themselves but Boško Šrot and his Laško got where they are now more or less thanks to politics and certain politicians. Janša was among them until 2007 and he knows that if pressed against the wall Boško Šrot will probably start oozing information at an accelerated speed. And secondly, if Janša has Šrot arrested, he must also have them arrest Igor Bavčar of Istrabenz. And that will never happen as he ows Bavčar big time since the latter headed the movement which eventually got Janša out of prison in 1988.

Remember, from Boštjan Penko onwards you don’t really need evidence to lock someone up. All you need is a willing police and a willing state prosecution. Both of which are availabe to the PM in large quantities. So, if not Šrot, who then?

Why, Ljubljana mayor Zoran Janković. He is roundly hated by Janša’s supporters as a model tycoon, who not only made millions in supposedly dogdy deals, but also entered politics where he continually refuses to play ball. Janković is trying to position himself directly up against Janša and he is getting quite good at it. Not that he is very damaging politically to Janša at the moment, but that might change in the future. Furthermore, by locking up a sitting politician, the PM would also send a very strong message to anyone who might be thinking about jumping ship – this is what will happen if you don’t do as I say.

Locking up Zoran Janković – even if just for a night – would send Janša’s party into a mass multiple orgasm and since more arrests are inevitable, the Mayor of the City of Ljubljana is high on the lists of possible arrests. This was corroborated by another media company whose people came to the same conclusion independently, as well as (indirectly) by a source within Janša’s party.

The question is – will Janša have the balls to do it?