Yesterday’s “tycoon” session of the Parliament was a quick excercise in cultural clash and marxism. As I noted yesterday, exactly four years ago then-opposition leader Janez Janša convened a special session of the parliament where he took appart the policies and apparent unwillingness of Tone Rop’s government at tackling the ever more apparent corruption, nepotism and cronyism in this country as well as the influence Rop’s and previous government were ecxersising over media. 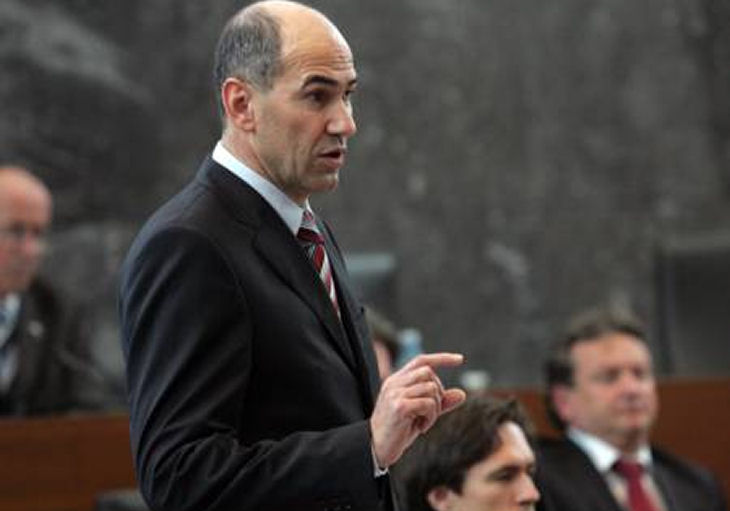 Are you thinking what I’m thinking? 😈 (photo: Robert Balen/Večer)

That was before Janez Janša (now as PM) changed the law on national radio and television, increasing government influence over both institutions and even before Janez Janša struck a deal with Boško Šrot and Igor Bavčar to sell them a controling share of Mercator to Laško Brewery and Istrabenz to remove Zoran Janković as Mercator CEO and have his people named into Delo’s supervisory board and management team.

Today, Boško Šrot is trying to control the game (which will in the long term quite possibly prove to be his undoing), while Janša is crying foul and trying to once again prove that the fact that Boško Šrot and Igor Bavčar are – between them – worth some 3 billion as for a few weeks ago is actually the fault of previous governments.

The special session was called by Janša’s Slovene Democratic Party. The mere fact that the ruling party is conveening a special parliamentary session to debate something that they promised to eradicate four years ago speaks volumes of this government’s incompetence, lack of ideas and – yes – panic. Therefore they’re turning to their usual tricks, which might even yield results. But there’s more. If anything, this session showed the way this government (in general) and Janša (in particular) feel this country should be run: Janša talks while others listen.

Janša’s address to the parliament was a prime example of the cultural clash I’ve tried to shed some light on Sunday. The debate was already raging for a better part of ten hours, with the level of dialogue dropping as the hours were passing. There were even accusations of glue-snififng, for crying out loud! And then, as if sent from heaven, at eight in the evening the Prime Minister descends upon the parliament in one of those “surprise visits” we see Western politicians making in Iraq or Afghanistan. The opposition MPs have already spent the time alloted for the debate and there was noone to oppose the Prime Minister who apparently addresses the parliament at will (something Boško Šrot wanted to do, remember?).

And so Janša talked. He told the MPs that they should be more careful when uttering accusations of widespread corruption, because most of today’s escapades have started under previous governments. He denied that he sold Mercator to Laško and reiterated (as he had already done during confidence-vote session in November) that Delo is an anti-government newspaper. The fact that he spoke after the opposition had already spent their time alloted speaks of the fact that Janša did not want to hear any arguments against his twisting of fact.

He did not want to hear that it was his deal with Boško Šrot and Igor Bavčar that allowed both to climb the final (or in Bavčar’s case – all) steps to ammasing an incredible fortune of billions of euros in a country where average salary does not exceed 900 euros. He did not want to hear that both Boško Šrot and Andrijana Starina Kosem blew the whistle in Mercator-Delo deal and that Delo was hijacked by Danilo Slivnik-Peter Jančič duo (CEO and Editor-in-Chief respectively) who temporarily turned Delo into a Slovenian version of Völkischer Beobacther (this proud title now belongs to Slovenski Tednik). He did not want to hear a zillion of other things, big and small he should face criticism for. Instead he had the last word, denying any oppinion to the contrary. Just as we demonstrated in this post.

And in the end – yesterday’s session also showed that this country is ran by a bunch of people with an 70s-apparatchik-mindset whose only connection to the 21century are fancy suits and mobile phones. The largest party in the parliament called a session so that its president could tell the parliament off and instruct it how to go about its business and en passant state a case for another term in power. And the reason is – as in any good Communist scenario – that although this government has had some successes in tackling the economic and social issues , they’ve only scratched the tip of the iceberg, since previous governments left the country in shambles and we must practically start anew.

People with a bit of a penchant for history will remember the phrase The revolution goes on. It sound frightnigly familiar.

8 thoughts on “Janša Talks And They Listen”