Many thanks to everyone for a very learned debate on Wedensday, most notably to the good doctor and St. Luka, while Aja deserves a special mention. ARF was correct, however – I was going somewhere with it. Not that it was a tough nut to crack 🙂

If you follow this blog long enough you’re bound to notice the following pattern: Almost regardless of the topic, the debate among Slovenes will end up at one of the following: Partisans/Collaboration, WWII in general, post-war killings & Goli otok, Comrade Tito & Communism. Or, more usually, an explosive mix of the four. The longer the debate, the more personal it gets and it usually engulfs even the coolest of heads, sudenlly creating two more or less disticnts camps and digging a seemingly impassable rift between the two. 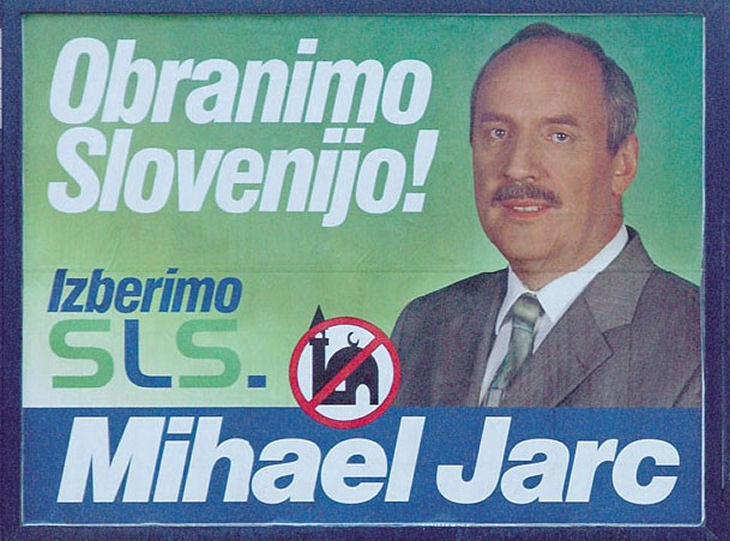 It is what we lately tend to call the cultural divide, or – more locally – the cultural clash. Not exactly conforming to Wikipedia definition, cultural clash is a recurring theme in Slovene society, the cultural divide seems to conform to Marxist statement of history repeating itself – first as a tragedy and then as a farce. The cultural divide has had many incarnations in Slovenia, the “original” one being that of a rift between “clericals” and “liberals” in late 19th and early 20th century, when Slovenian political landscape was being shaped. It is not just your usual clash between old and new, conservatives and liberals, traditionalists and avantguarde, small-mindedness and cosmopolitanism. It is all of these things, but there’s more. It is a clash between two different perceptions of “what is right”.

In today’s terms it is a clash between 19th and 21st century. On one hand we have the traditionalists, who believe that this country lacks identity and patriotism and – in general – think in terms of a nation-state, on the other hand we have the progressives which are quite content with relative lack of Blut-und-Boden patriotism in this country and acknowledge the fact that identity, ethnicity, nationhood and citizenhip do not necessarily correlate with each other.

Naturally, this extends into politics as well. While there are notable exceptions to the rule (especially the smaller parties tend to elude a simple definiton), the division between progressives and traditionalists increasingly follows the lines of political division between left and right. And as at the moment political right hold the upper hand in the balance of power, we can observe not only a tendency to defend the achieved status quo, but also a drive for restoration of a provincial 19th century mindset, which includes, but is not limited to building our traditions, being patriotic, saluting the flag (especially in schools), maintaining the old even at the expence of new and – above all – looking up to them (the traditionalists) for guidance on what is right. You can see it everywhere.

You can see in the way a noted right wing intelectual who discretist a particular theatre play not because it is bad as such, but because there is only one way to do this author’s plays.

You can see it way a prominent architect and a high ranking official in charge of cultural heritage who will not allow any changes to existing Ljubljana stadium – not because it is bad – but because it was renovated by Jože Plečnik in 1930s and you don’t touch Plečnik.

You can see it in the way a “culinary critic” spits fire and sulphur in a newly founded right wing magazine on an upscale restaurant in Ljubljana because there’s only one way to do a sea-bass.

You can see it in the way the Foreign Minister denounces those journalists who voice oppinions others than his own and rewrites history along the way.

You can see it in the way the Prime Minister takes appart media that do not report his version of the truth and ostricises them for voicing their concerns internationally rather than solving it at home.

You can see it in the way this government and its political satellites are deepening the border dispute with Croatia and are swearing on all that’s holy that they will never give up an inch of sacred Slovene land.

What you can observe here is a complete lack of dialogue. Traditionalists feel that no dialogue with progressives is necesary, since they are the chosen holders of Single Truth. Anything beyond this spectrum simply does not exist and the fact that some people (or groups of people) do voice dissenting oppinions, disqualifies these groups immediately. It is not a simple case of “my way or the highway”. It is a case of denying the very legitimacy of a possibly dissenting opinion.

And so – although they claim the opposite – the cultural clash is in fact caused by traditionalists, but fueled by the progressives, as the latter try (usually in vain) to open up a constructive dialogue with the former. Which is exactly what happened late 80’s when the Communist party was “the traditionalists” and almost everyone else was “the progressives” and despite the paintfully obvious fact that the progressives of the perios were offering different answers to paintful questions, the Party maintained that it is the sole holder of The One Truth, until it crumbled under the weight of its own nonsense.

And the very same thing is happening now. It’s just that a few of those who have tried to open up new fields of dialogue in late 80s are now more than content ignoring any other opinion but their own, therefore claiming that it is the other side which is engaing in cultural clash. And thus progressives become traditionalists once again. It’s just that these particular traditionalists have a reactionary agenda, revolutionary modus operandi and an inflamatory rhetoric.