This is going to be an extremely short post, but I’d like to show you how wars start in my part of the world. One of the main reasons for wars and correspondingly low capacity of a given society to survive social and economic transition is the urge to right the ancient wrongs. Put less politicaly correct, we are talking about the people who fled (or were fled, so to speak) the post-WWII socialism and now feel it’s payback time. 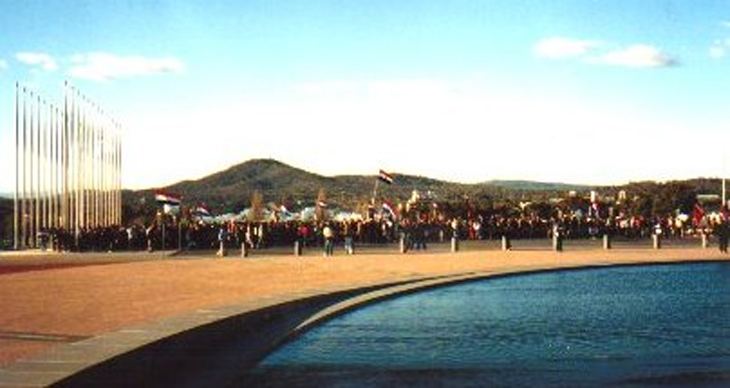 A rally by the Australian Slovenian Conference. Why are there so many Croatian flags?

Popularly called The Diaspora, they are usualy people who left the country (in this case Slovenia) decades ago, usually for political, but also for economic reasons. Especially those among them, who are politically active, tend to gravitate to the right of political centre (I’ve yet to find me a politically active left-wing Slovenian ex-pat). This is especially the case in the Land Down Under, which was a post-war destination of choice for many Slovenes, Croats, Serbs and so on. These people left their motherland some fourty-odd (or even more) years ago and obviously have a rather distorted – or at the very least severely outdated – perception of their county of origin.

And so it happens that I read in today’s Dnevnik, amond Letters to the Editor (always an exciting read, revealing the deep shallowness of Slovenian soul) a letter by the Australian Slovenian Conference addressed to Prime Minister Janez Janša, urging him to stop “carelessly and irresponsibly ceding Slovenian land to foreigners. We are certain that history will judge you harshly if you do not change your approach to the matter at hand and do not stand up for Slovene citizens and Slovene land” and goes on to add that “ex-Yugoslavia has ceded a large piece of Slovene land to Italy in exchange for a large piece of Croatian land, which Croatia claimed as its own after the breakup of Yugoslavia. How will Croatia compensate Slovenia for this loss?”

You see, people of Slovenia and Croatia lived in peace throughout history. We may say bad things about each other, but in the end Slovenes like Croatian seaside and music and Croats like Slovene mountains and shops. And both hate each other’s roads. It’s only when people who are stuck in 1945 and have a 19th century mindset (i.e. land is power) start stirring the pot, that all hell breaks loose.

Australian Slovenian Conference did shit to get Slovenia where it is now (except maybe partly fund Janša’s party) and for that precise reason it should keep quiet, sit in the back of the class, listen to old records and do those silly little dances they think are the essence of being Slovenian. But PUH-LEASE don’t do politics. It is difficult enough without warmongers of the 19th centuty claiming land that was never our own.

15 thoughts on “The Diaspora (This Is How Wars Start)”