As this year’s election campaign in Slovenia slowly shifts into second gear, cracks are appearing in the structure of the Slovene political left – which was never of a particularly strong construction to begin with. Now, it is a generally accepted fact that in almost any more or less developed democracy parties of the political left are prone to internal bickering and in-fighting. This is nowhere more true than in Slovenia where there tales of people crossing the road to avoid meeting other people from the same political bloc are legendary (this is – or at least was – especially true of the various leftist think-tanks where theoretichal disagreements often turn into personal animosities). 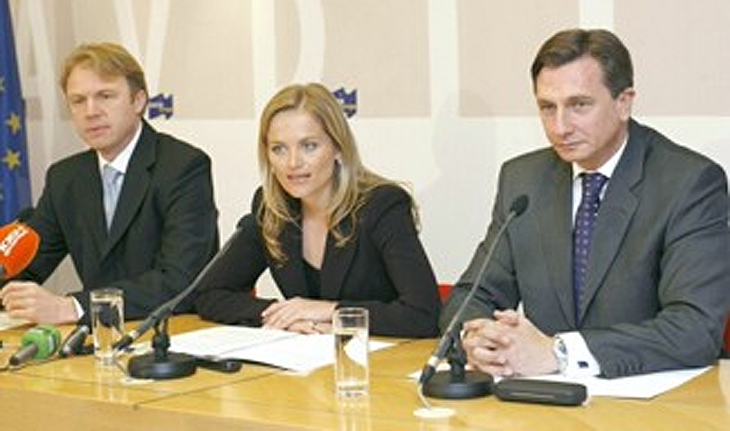 The Trio From The Left Bloc(k) (source)

However, this modus operandi is fast becoming obvious to the general public as well. It seems that the three leaders of the left bloc, Borut Pahor, Katarina Kresal and Gregor Golobič, of Social Democrats, LDS and Zares respectively are cautious (to say the least) about forging a pre-election coalition, much to the annoyance of former President Milan Kučan, who days ago publicly placed a rhetorical question, why is it so hard to say that certain parties are politicaly more compatible than others – a very clear signal that Milan Kučan, the living legend of the Slovene political left and a powerul figure in his own right, thinks that the left bloc should state its intentions loudly, clearly and transparently.

Contrary to what some perhaps expected, Kučan’s call recevied a muted responce by the three leaders. And for a good reason, it would seem. There are a couple of factors which make forging closer ties between SD, LDS and Zares not the brightest of ideas. At the moment at least.

Firstly, there’s the issue of disintegration LDS. Fact of the matter is that many of LDS’s former bretheren found their new home just around the corner (so to speak) in SD and Zares and embracing them as partners shortly after they skeddadled as party members would not go down well with a big part of LDS membership. Not that LDS is in any position to dictate terms at the moment, as it is still leaking members to other parties.

For precisely the same reasons – just put the other way around – Zares is not all that keen on marrying LDS. I mean, they’ve just gone through a very messy and a very public divorce and now they are to shack up together again? No way! Besides, Zares has nothing to lose one way or another. It’s making it across the 4 percent vote treshold and into the parliament is almost a given and perhaps they’d be even better of in the opposition for their first “true” term as a parliamentary party. Gregor Golobič said so less than six months ago and has since then only once mentioned the possibility of Zares going all the way to the top (i.e.: being a member of the ruling coalition).

And finally, Borut Pahor is doing everything possible to show that he is not Kučan’s puppet, even to the point of picking fights fith the former Prez where none are necesary. When Kučan went on the record saying that it is not a given that Borut Pahor will be the next prime minister, the latter responded by saying that will not make way for anyone who might be “chosen behind the scenes” to run the country. The force of Pahor’s responce was quite disproportionate to Kučan’s remark, which speaks of at least two things:

One: Social Democrats are not on as strong a footing as they would have us believe (and Pahor knows it) – were he totally sure of his position, Pahor would have let Kučan’s remark slide or even embrace it (something along the lines of: “of course it is not a given. It is for the people to decide”. Instead he took it as a direct challenge and responded in kind.

Two: Borut Pahor is very much haunted by political shadows. He distances himself from Milan Kučan, but knows that Kučan’s support will be one the key elements in gaining that final push which would propel him to the top job. In short, he wants to have the cake and eat it. At the very least he wants Kučan not to support any of the other two parties in the left bloc. The other two parties are of course hoping he will do just that.

There is however one more shadow that haunts all three parties. It takes the form of Ljubljana mayor Zoran Janković who is punching way above his weight at the moment. It seems that everyone recognises him as a sort of a king-maker and is keen on pleasing him. This is why Zoki can get away with almost anything. Even the fact that he will – watch this – summon all three opposition parties to the City Hall and demand to see what their policies towards Ljubljana will be – and only then will he announce his support for a particular party – if any. Ballsy.

So while Social Democrats, LDS and Zares are avoiding becoming to comfy with each other, trying to please Zoran Janković and running circles around Milan Kučan, elections are approaching. But recent events suggest that the three party leaders may have opted for the right tactic and that it is Milan Kučan who excercised some poor judgement this time around.

Namely – presidential elections, held autumn last showed that if there is more than one left-wing candidate in the race, left-leaning voters are slightly more likely to actually turn up at the polling station. So three slightly different platforms might on the whole draw more left wing vote than one unified (and- by exention – watered down) political platform of a single bloc.

Secondly – having three independent and only loosely connected parties attacking the ruling coalition gives prime minister Janez Janša three political enemies to worry about (plus Milan Kučan, plus Zoran Janković, plus Karel Erjavec of DeSUS and Bojan Šrot of SLS- even though the latter two are formally coalition members.) and makes matters infinitely more complicated from his point of view. It the three parties were to stand as a unified bloc, PM Janša would only have to focus on one person or issue, immediately putting the supposedly stronger bloc on the defensive.

And finally – the way things stand now, the ever more apparent cracks, bickering and in-fightings are actually streghts, which would immediately turn into weaknesses if any sort of a unified political alliance between the three parties would be announced. The latter would require a single leadership, a single platform and a single voice and none of the three parties are prepared to give way to any of the other two – and the possibility of an outside man becoming leader of the bloc was immediately rejected by Borut Pahor. Whether or not Katarina Kresal and Gregor Golobič share the sentiment is not known (I’d even venture to say that the latter would welcome an outside man as a leader – he’s done it before, you know), but this option is off the table for the moment, at least.

5 thoughts on “Cracks In The Left Bloc”