A new edition of Politbarometer, a more or less monthly check-up of public opinion polled and published by Public Opinion and Mass Communication Research Centre revealed what has a Ninamedia poll a month ago detected: that Zmago Jelinčič and his SNS are on the rise. This time around they took the third spot, which should ring alarm bells all over the political spectrum. 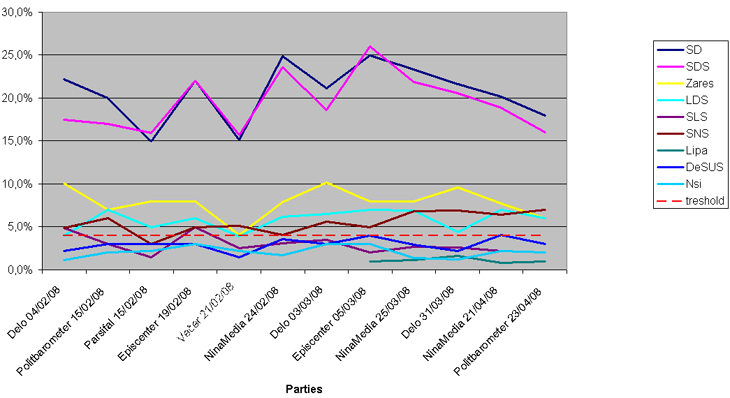 NOTE: for unknown reasons Politbarometer failed to detect Sašo Peče’s Slovenska Lipa. It only cites 1% of the vote under “other”. For reasons of continuity I put that result in Lipa’s column.

According to this poll SNS is the only party on the rise, which is bad bad news especially for the left bloc, because it means that the canmpaign will acquire an increasingly populistic tone. But it is even worse news for the right bloc, because it is now clear that Janša’s attempts to take over SLS and NSi votes have resulted in driving the voters of these two parties over to SNS, suddenly making it a force to be reckoned with. But this also sheds a whole new light on possible post-election coalition arangements. So far we’ve only compared two easily identifiable blocs: SD, LDS and Zares (left bloc) versus SDS, SLS and NSi (right bloc), with other parties playing a side role. At the moment this gives us the following division of the decided voters (note that as much as 39 percent of voters remain undecided) : 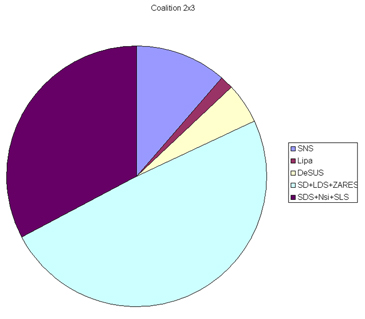 If we now indulge in some political mathematics, we are presented with two options. ONE: Call it a true left/right split. In this scenario SD, LDS, Zares and DeSUS form a completely left wing coalition and enjoy a comfortable 6 percent lead over the right bloc. TWO: The ruling coalition is extended to include Jelinčič’s SNS and in this scenario we are faced with a split down the middle, which – some claim – is the natural state of Slovene politics.

Translated into reality (with some help of electoral mathematics), this would mean that a left-wing government would enjoy a small, but managable majority in the parliament, whereas a right-wing government would have a mininimal majority, possibly having to rely on the votes of minortiy deputies, which traditionally vote with the government.

There is another element, however. Today, President Danilo Türk addresses the parliament on the issue of the Constitutional Court, which is subject to increasing political pressures as well as burdened with an exponential increase in cases. Türk – whose yesterday’s speech to the European Parliament has won international acclaim – will most likely strike at the core of the issue and possibly shift the focus on the debate to some elementary problems this country is faced with – the independency of the judicial branch being chief among them.

Pengovsky’s projection: Which of the two scenarios will occur mostly depends on which party gets the most votes. If Janša’s SDS tops Pahor’s SD, then the second scenario is much more likely to happen, as Janša will (as he should) do anything in his power to continue running the country. However, the Prez’s speech might stir the pot just enough to add some real content to the election campaign and force the parties to take a stand with or against the proposed issues, and – by extention – with or against the President himself.