After a quiet three-week period, we’ve had another poll by NinaMedia, which basically shows more of the same. Namely, that the oppostition Social Democrats and the ruling Slovene Democtratic Party are still neck-and-neck, with other parties trailing far behind. But the “far behind section” is fast becoming a three-way race, with Liberal democrats, Zares and now SNS all squeezing within one-and-a-half percent. 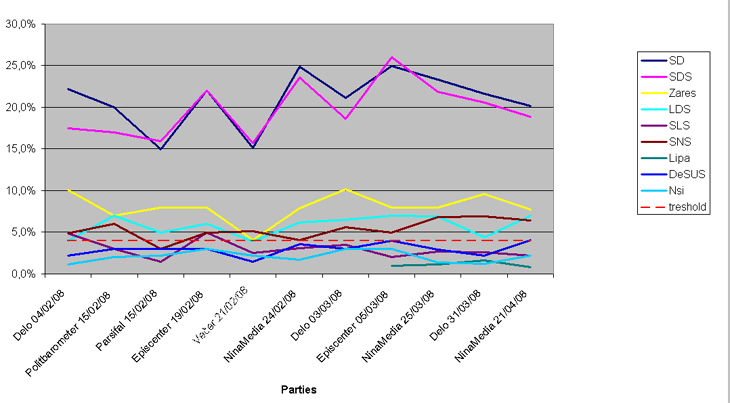 Now that Borut Pahor has more or less made it clear that he will (at least at first) seek to form a left-wing coalition with Zares and LDS, a complete polarisation of Slovene politics is imminent if not already here. This is why a comparison of percentages between left and right bloc is suddenly very telling. The graph below shows that the three opposition left-wing parties could at the moment form a government on their own, since the finer points of Slovene electoral mathematic allow for an absolute majority with around 30-40 percent of the vote, if the rest of the vote is fractured enough. 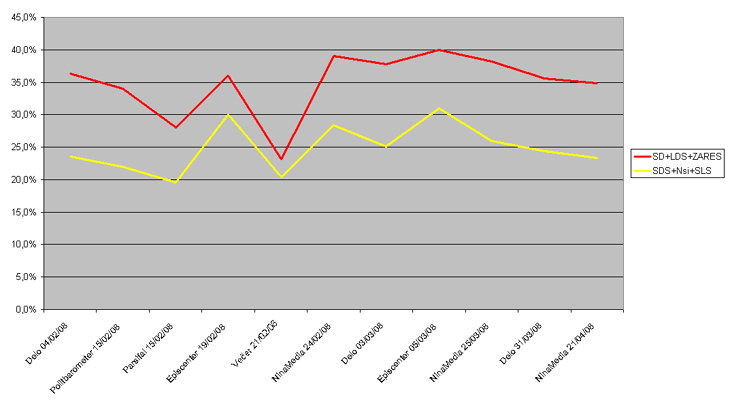 Here the “cannibalisation effect” is very much obvious. The coalition parties (minus DeSUS, which is tehcnically a coalition party, but left-wing) can muster only slightly below 25% percent of the vote, which means that Janez Janša – the way things stand now – would have to co-opt both DeSUS (again) and Jelinčič’s nationalists, both in addition to his current rather alienated “natural” coalition partners – SLS and NSi. Both are recording depressingly low percentages and pengovsky is none too happy about that.

However, elections are still almost six months away and it would appear that we will witness at least one more referendum – this time on regions. More on that in one of the future posts (when more details become available), but at the moment it seems like a very nifty move by PM Janša – the government has ammended its proposal to include City of Ljubljana as a separate region and reduced the number of proposed regions (from 14 to 12), which makes the idea a whole lot more appealing to many people.

Pengovsky’s projection: As the left is trying not to fix what ain’t broken while it enjoys a comfortable lead over the right bloc, the government (and especially the PM) are looking for ways to spend the left bloc’s potentital by egaging it into relatively unimportant but nevertheless bloody political fights. The upcoming referendum (the date is yet to be announced) is primarily aimed at bolstering government’s ratings both by making the left loose energy over it and by giving the people another punch bag just before the elections on which they can vent their frustrations with the government. So, even Janša and the governmetn lose the referendum, they are much more likely to win the election (but not necesarily win the majority in the parliament). And if SDS comes out as the relative winner, you can be sure that Zmago Jelinčič and his nationalists will find themselves very close to the top levels of power – possibly getting a ministerial posting or two. Zmago Jelinčič as minister of interior? Did we really drop that low?

9 thoughts on “A Referendum Up Janša’s Sleeve”