More polls. The latest one was done by NinaMedia and run by Dnevnik daily and POP TV. Two things stand out. Firstly, the poll recorded an almost exact same percentage of undecided voters than a month ago (a rather welcome change from the wildly fluctuating number of “don’t knows” we’ve seen in the last couple of months). Secondly, the nationalists (SNS) led by Zmago Jelinčič recorded a sharp rise in popularity. 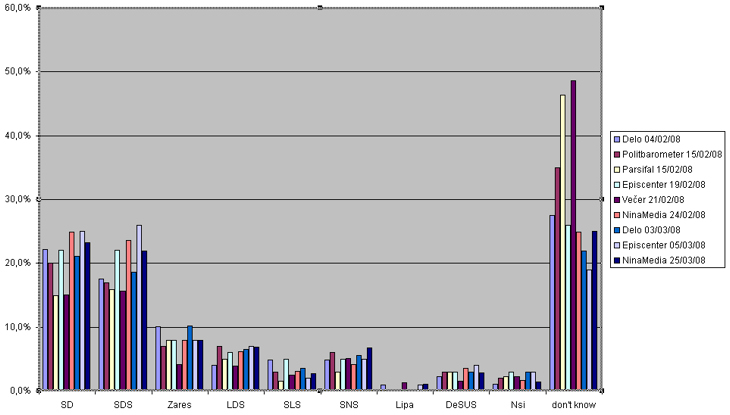 We can safely assume that Jelinčič’s rise in popularity is directly and indirectly the result of renewed border disputes between Slovenia and Croatia. As the latter revoked its Ecological Fishery Zone and was in return given a seat on the fast train to the EU, Slovenia has lost its leverage in Brussels and must now deal with Croatia on its own. Its just that the current situation suits politicians on both sides of the border just fine. The dispute is easy ground for scoring cheap political points. All you need is to go to the disputed area, have cameras follow you and start talking tough. If you repaint a border-marker ot two, all the better. This is exactly whar Zmago Jelinčič did: He went into a bush that supposedly separates Slovenia and Croatia on the bank of the river Mura, and went about single-handedly protecting Slovene national interests. Or so he says. TV crews obligingly followed and participated in this charade and made Zmago the day’s headline. Cocksucking supreme, if you ask me. Why not just ignore the guy?

In any case, Zmago seems to have struck a chord with some of the 2,7% additional voters who support him. I would sumbit to you, however, that a large proportion of his newfound support materialised “by extension”, so to speak. Namely, anytime Croatia is on the menu, people instinctively think of Jelinčič and his anti-Croatian rhetoric. In any case, Zmago Jelinčič and his SNS are the only party making any serious gains this time around 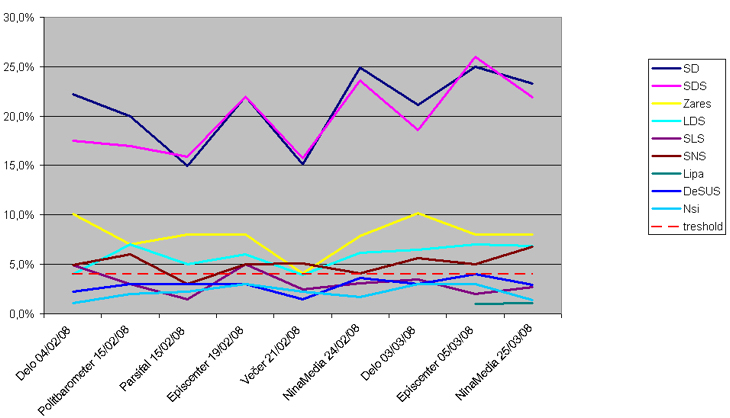 Having said that, the other part of the nationalist wing, Sašo Peče’s Lipa is again loitering around the 1% mark, which isn’t exactly good news for Sašo, as he should be making headlines by now, having a new party and all. In other races, Katarina Kresal’s LDS seems to have closed the gap on Zares, and is now trailing the party led by Gregor Golobič by a mere 1,1 percent, while SD and SDS kept first and second place respectively, with both parties losing some support but still breathing down each other’s neck.

We now have two sets of polls for a sort-of-longitudal comparison. If we take Delo’s polls of February and March and look at them side by side – well, one above another, actually – with Ninamedia’s polls of the same period, we can recognize some similarities, especially as far as LDS, Zares, SNS and SLS are concerned (the latter just can’t get off the ground). But there are also big differences: In Delo poll Janša’s SDS took the lead with Pahor’s Social democrats coming in second, while DeSUS and NSi enjoyed a hefty addition to their popularity, while Ninamedia poll detects an opposite situation, with SD marginally leading over SDS and DeSUS and NSi taking a slump 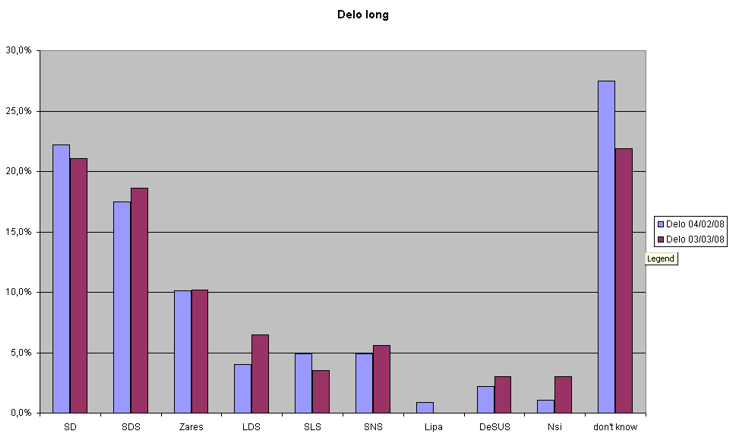 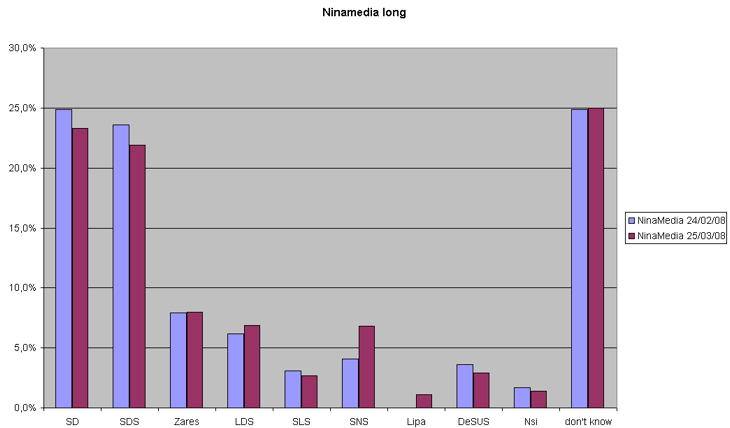 Pengovsky’s projecton: As other subjects grow more imporant in this campaign, Jelinčič’s bump is not expected to last. But this is fast becoming an eight (OK, at least seven) horse race, where a development in any of the smaller parties might have huge impact on any of the two big parties. So a continuosly strong showing by Zares had made its president Gregor Golobič self-confident to the point of not excluding joining a ruling coalition, although he was very conservative about his party’s goals as late as December last. But apparenly a lot can change in three months. So, if Zares and LDS (and possibly DeSUS) manage to hold on to or even improve their current ratings, their importance might grow far beyond their size as Borut Pahor will be pressed from all sides to form a centre-left government (with him being the centre – in more ways than one).

Oh, and while we’re on the polls issue: POP TV reports that SDS went mouse-click happy (Slovene only, I’m afraid) as one or more computers within its domain were used to vote on a web-poll run by Žurnal24 daily. What apparently happened is that SDS organised a click campaign and bumped the support for PM Janša in the poll. Before the trick was spotted, the poll said that 95% of responeed supported the PM against Andirjana Starina Kosem . Can’t say I’m surprised, really, because we’we seen something like that in Vroči Stol, when 83% of respondees supported Janez Janša against Borut Pahor. When will these guys learn that old tricks just don’t work any more?

10 thoughts on “Zmago Jelinčič Stirring The Pot, SDS Up To Its Old Tricks”