I almost missed it, but there was another poll by Episcenter published Sunday last. Please note, that this poll too – as all other Episcenter polls in this series – was commisioned by the government, which might have influenced the results. But be that as it may, two things are immediately obvious: the ruling SDS of PM Janša has surpassed its oppositon rival, the Social Democrats for the first time. In terms of total percentage points both parties have gained, but while the SD recorded only a token increase in support, SDS made substantial headway. Secondly, the “don’t knows”: this time around Episcenter records a staggeringly low percentage of undecided voters – a mere 19 percent. 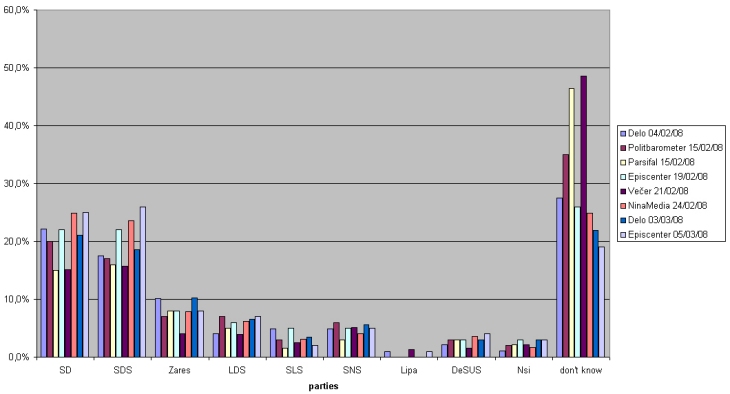 In other interesting races: Zares kept the third place, while LDS (which some of the more prominent Zares and SD members used to call home) gained slightly, closing the gap a bit. The pensioners’ party (DeSUS) gained as well, which means that its eloquent-if-somewhat-sleazy boss does indeed know how to dodge bullets and survive politically. Supporters of Zmago Jelinčič (the nationalist party – SNS) seem to have remained unfazed by formation of rival nationalist party Lipa (headed by former SNS second-in-command Sašo Peče). The latter got a sole percentage point, but that is actually better than expected, as Peče & Co. have little to show for at the moment – save a nice-looking website.

And finally – christian democrat NSi (Nova Slovenija) and it’s slightly more enterpreneurial cousin-party, Slovene People’s Party (SLS) are hovering around the 3-percent mark, with NSi gaining the upper hand this time around. This is the longitudal graph representing all the polls in a single timeline: 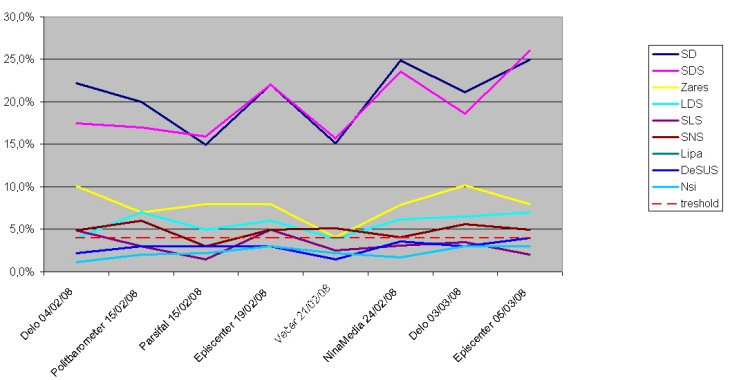 What to say? For starters, if the exceptionally low number of the undecideds persists, we can assume that the polarization has already begun and that a visciously bloody fight for scrap-votes will ensue the minute the EU presidency end. Quite possibly, we won’t even have to wait until then as the SD will apparently have to do something, fast to prevent its ratings spiraling out of control. Yes, there is the presidency and the anti-tycoon drive which have bumbed up Janša’s ratings (as predicted), but that doesn’t mean Borut Pahor can sit on his pretty arse and do nothing but wait. They seem to be aware of that, as they’ve hired the same campaign managers which have helped the likes of Bill Clinton and Hugo Chavez get elected (link kindly provided by abaris, any relation to yesterday’s post is coincidential yet intentional 🙂 ).

What amuses me, though, is DeSUS. Namely: I’ve said on a number of occasions that pensioner’s party and similar cleavage parties (don’t google it 🙂 ) should be illegal, as they go against the essence of democracy (in my opinion at least political platforms should be shared based on beliefs and ideology and not based on age). But they seem to be turning into the little party that could.

Most of you remember the referendum on Triglav Insurance, which was held on the same day than last year’s presidential elections and when the voters overwhelmingly rejected the proposed privatisation of the state-owned financial heavy-weight. DeSUS and SLS went apeshit over it and demanded that the company’s controlling share be trasfered to the pension fund instead of being sold. Exactly a week ago the government passed a bill which proposed that a 34-percent share be transfered to the said fund, hopefully making it solvent for the forseable future. Having achieved this, DeSUS’s president Karel Erjavec seems to have the last laugh for now, as he actually does have something to show for joining the coalition.

Namely, three-and-a-half years ago Erjavec took a lot of heat withing the party, when some of its more fervernt members vowed to cut their remaining leg and burn their walking canes before going in bed with Janez Janša. But Erjavec maintained that their interests will be better protected if they join the colalition as opposed to remaining outside and bitching about it. With Triglav, Erjavec made his point big time. The added bonus being that he seems to bask in glory alone, as SLS is still trying to pick itself up.