Monday’s edition of Vroči stol (Hot Seat) apparently created quite a stir this side of the Alps. Vladimir Vodušek is generally thought to have achieved a new low in Slovene journalism and people are openly asking if the whole thing can go any lower. The answer of course is “yes“. The ultimate low will be reached when sleazebags like Vodušek will start feeling the tide turning and will turn rabid on their yesterday’s masters. 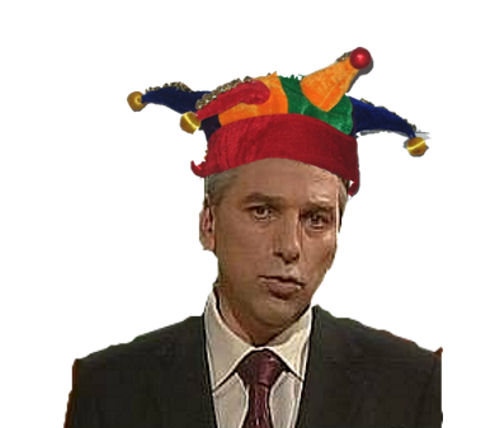 An artist’s interpretation of Vlado Vodušek

I might be overreaching here, but I don’t think there is a journalist worthy of his/her vocation in Slovenia today who doesn’t think that Vodušek went above and beyond the call of duty to portray Prime Minister Janez Janša in the best possible light. The programme also showed in technicolor just how out of touch this government is with the 21st century. While appearnig on television and saying that things are such-and-such might have worked in late 70s, it sure does not work today. People are distrusting both politicians and media (bad political journalism includinng but not limited to Vodušek has played a part in creating this sentinment for the past decade and a half) and if the PM wants to get his story straight he better do it somewhere else than in a live TV studio, no matter how submissive the interviewer may be.

Vodušek didn’t make any friends with Monday’s show either. Even worse, as he is being ridiculed by rank-and-file journalists, Delo daily (whose editor-in-chief Vodušek grilled on the show a couple of weeks earlier) was more than happy to publish entire transcript of the show on its website, exposing Vodušek’s servitude in writing as well.

And just to top everything there was the ludicrous call-in poll which showed 83% support for Janez Janša over Borut Pahor – the usual comment out there was that it reminded the people of the times in Serbia when Slobodan Milosevic won the elections with 106% of the vote.

As I said – a new low was reached, but something tells me we didn’t hit rock bottom just yet.

16 thoughts on “Aftermath of the Hot Seat”