The parliamentary group of Slovene National Party has split yesterday in what was a most unexpected beginning to the 2008 political season. The party, which – contrary to expectations – won six seats in the parliament in 2004 elections is what I like to call a post-modern party: its political platform is a patchwork of different policies and ideologies, many of which are in direct contradiction with one another (like combining reverence for the Partisan movement with proto-facistic ideology), but – somewhat suprprisingly – this has not damaged the party’s appeal to those voters who for one reason on another decide not to vote for any of the mainstream parties. 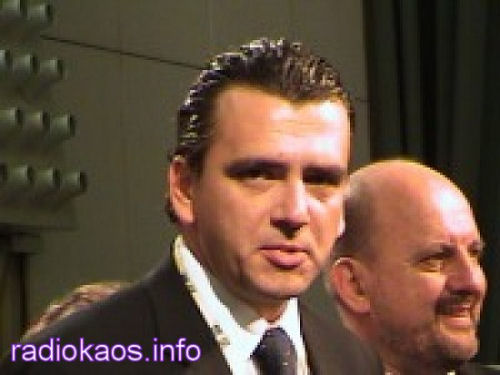 
SNS has seen its heyday in 1992, when it got as much as ten parliamentary seats (then too, its caucus split, but for different reasons), but 2004 was a fruitful year as well. Party second-in-command Sašo Peče was named Vice-President of the Parliament, the highest office ever held by a member of SNS. But yesterday the party was plunged into dissaray, as half of its six-member parliamentary caucus – led by Peče – announced that they were forming a parliamentary group of their own.

As hours went by, the official story of why’s and for’s changed rapidly. Originally it was understood that Peče was gravely insulted at an SNS party (apparently he was called by his diminutive name “Saško” by a party faithful. Peče seems to react badly to this). But as hours progressed, reasons became more and more serious. Or so they would have us believe. Party president and head of the caucus Zmago Jelinčič claimed that a referendum on Croatian entry to the EU was at the gist of things (SNS is known for its hard-line anti Croatian stance), whereas Peče claimed that Jelinčič danced to the tune of PM Janez Janša and has sold out the party for his personal interests. Furthermore, the number of defectors was originally higher, but during the course of yesterday morning Bogdan Barovič had a change of heart and announced that he will not be joining the rebel group, citing family reasons!!! The story went on and by yesterday evening, Jelinčič offered another theory: that the Slovene People’s Party (SLS) was behind it, trying to dismantle the SNS from within.

Now, had this been any other party, yesterday would mean massive political earthquake. But this is SNS – the party which always somehow made it, even if it meant swithching from nationalistic rhetoric to condmening NATO airstrikes against Serbia and siding openly with Serbs. You see, if had to describe Zmago Jelinčič with a single word, it would be survival. He will go to impossible lenghts to secure another term, perform ludicrous rhetorical stunts, do almost anything just to make life difficult for the larger parties which at some point will need his votes. It is also rumoured (but never proven) that he is more than willing to do a piece of dirty work for any party (say, propose an unpopular referendum) – for a price. But at the same time he is probably one of the more able political analysts out there, being able to predict outcome of events well in advance, highly intelligent, and he speaks near-perfect English 🙂

In any case, the shit that is brewing for the past couple of days smells more of a double-crossing than of anything else. Particularly telling is Barovič’s flip-flopping. The way things stand now, SNS’s causus has split into two groups of three MPs, which just happens to be the mininum number of MPs for a political group to be entitled to all the parliamentary spoils, such as their own seceretaries, monies and – TV time during election campaing. And had Barovič remained with the rebels, SNS proper would have only two MPs and would lose its status. So it was vital that Barovič or anyone else of the rebels remains with Jelinčič.

Now, I may be wrong, but having seen some of Jelinčič’s improbable stunts first hand (at one point he proposed a change in election law which would actually work against him – just to tease everyone else and send them asking “why?”) I wouldn’t put it past him if he has already made a calculation regarding the 2008 elections and saw that he needs to do something. Anything.

Elections this autumn will probably drive most of the electorate in the arms of the strongest parties, which would obviously mean a great deal of trouble for Jelinčič & Co. If he, however, somehow managed to double his media and political presence, he just might make it yet again. And so I strongly suspect that Zmago Jelinčič and Sašo Peče are putting on one hell of a show and for two reasons: Firstly, like in Black Jack, they split their bets. They will spend most of the next eight months attacking each other and everyone else, which will mean plenty of media coverage – in fact, twice as much as if they stayed in the same boat. But the other reason is simple. They just wanted to stir the pot a bit more. Jelinčič usually doesn’t give a shit about fuck about anything and this applies to his latest “marital row” as well. It is just a carefuly orchestrated show aimed at ensuring the continous political survival of SNS’s six MPs – in whatewer name, shape of form this may take place.


P.S.: As you can see, small changes to this blog are already happening. A couple of bookmarking icons and a new category will do for starters 🙂

29 thoughts on “Nationalists In Disaray – Or Are They Faking It?”