The government of Janez Janša as expected survived yesterday’s vote of confidence. The show we have had the dubious pleasure of seeing, however, bordeded on the inexplicable. What we have seen was the good old paranoid Janez Janša, who basically acused everyone who did not toe the line (his line) of high treason. 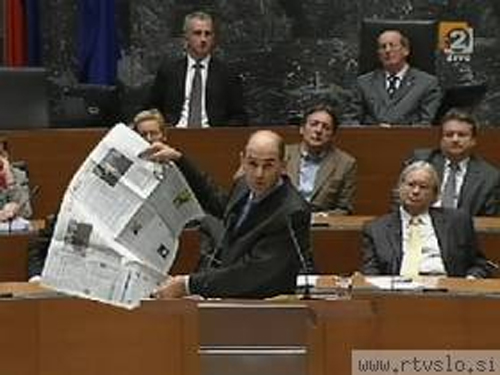 
His speech lasted for the better part of two hours. One would expect that – given all the supposed economic successes of this government – Janša would go on and on about it like an Energizer bunny. Instead he just leafed through it, showed a couple of powerpoint graphs and (among other things) claimed that higher birthrate in this country is a direct result of his government’s policies. Riiiight….. It had absolutely nothing to do with the fact that baby boomers are simply having kids…

But before that, for and hour and a half, we’ve seen some very blatant and direct attacks on Slovene media and some journalists in particular. Janez Janša kept asking himself rhetorically, where is this so called pressure on the media, since everyone seems to be attacking the government (in that moment he produces an issue of Delo newspaper, with marked articles by journalists who signed the anti-censorship petition).

Now – since in the past few days I was asked that same question – let me aswer it (although I must admit that doing so makes me feel rather uncomfortable, because journalists sure as hell aren’t the only ones feeling the heat in this country) :


Perhaps the fact that one of these journalists was interrogated by the army intelligence in 2000 while Janša was minister of defence because he had published a confidential memo?

Or perhaps the fact that a moderator on national radio was fired (and then re-hired afer a public outcry) for making an unappropriate remark about the PM?

Perhaps the fact that non-government aligned media have a tougher time securing advertisments from government-owned companies who are still the largest advertisers in the country?

Perhaps you’re still not convinced and you don’t know about our foreign minister at one point telling the media that it would not be benefitial to them to pick fights with the government?

Or perhaps the fact that national television lent a willing hand in removing Mitja Gaspari as governor of the Central Bank?

Perhaps even the fact that (while they were good chums) Janša controlled Delo daily via Laško brewery, had a cooperative supervisory board, a cooperative CEO (Danilo Slivnik) and an even more cooperative Editor-in-Chief (Peter Jančič)?


You see, politicians all over the world find it hard to resist the urge of subjugating the media. Slovenia is no exception. It never was. Even the LDS is not without sin in this department. Janša was right on one point – that media cartels were established under LDS and we still feel the effect today. However, that does not make him any less responsible for media pressures that were (and apparently still are) exerted under his tenure.


But are big bad media being accused of?

Well, for starters, the said petition. Apparently JJ has no problems with rebelious journalists. Until it gets out, that is. He explicitly said that the problems journalists have should have been handled at home and that they should not have been brought to the attention of foreign and international organisations. And I went… WHAT. THE. FUCK!?! But wait, there’s more! Remember the Strojan family? And The Erased? The PM finds it insulting that he has to answer questions by foreign media about these problems when there are much more important things at hand – like Slovene presidency of the EU

Newsflash: Nothing, and I mean nothing is ever more important than human rights and freedom of information (and sex :)). I’m usually the one told to shut up, but this time I must admit that I am at the loss for words, disgusted and shocked by actions of my prime minister who – in a desperate attempt to keep face – accuses journalists of high treason for not falling into line of national unity just prior to EU presidency.

For the record: I personally don’t feel the pressure any more than I did prior to Janša’s rise to power. The Firm™ is far too insignificant for that (or maybe not – I still can’t get an FM frequency). But I soooo hate being told what to do, what to say and what to report. And if got yesterday’s message, than you can be sure a lot of other people did too. It doesn’t matter that most of us will not obey it. Pressure was brought to bear by the prime minister of a EU member state in the most public place of all – a session of the parliament. It was pathetic.