Things are happening with lightning speed these past few days. Yesterday PM Janša acknowledged that Sunday’s elections were predominantly a vote against his government and said that in the aftermath anything is possible, including a resignation of his government. 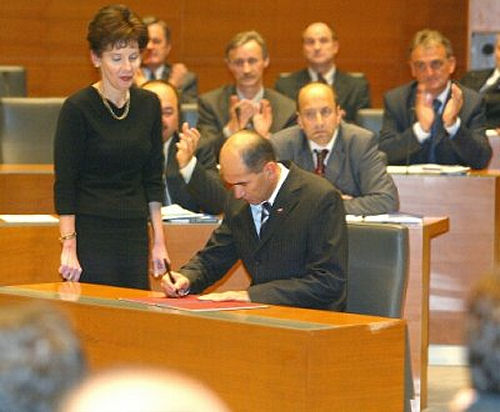 JJ sworn in as PM


Personally, I think this statement was a very wise move, but perhaps for a not so obvious reason. But this does present a wonderful opportunity to see how a Slovenian government can be changed in mid-term. In short: it is mighty difficult to do so. As I already noted in this post, government is appointed by the parliament and can thus be changed only by the parliament. And the only was for the parliament to change the government is if some major political shift happens and a new coalition is formed. Because the incumbent PM can only be replaced by appointing a new PM – the upside being that there is a very short period of interregnum, where the outgoing government assumes a caretaker role.

And last but certainly not least, the prime minister can demand a vote of confidence. Should he/she lose this vote, the parliament must within thirty days appoint a new PM or confirm the incumbent one. If none of the two happens, the president of the republic disloves the parliament and declares elections.


However, I serioulsy think Janša’s statement is mostly of a pre-emptive value. It might be his pride talking, but in reality this was a very smart political move. Since he said that resignation is an option, he took this issue off the agenda and few people will press him on it. Especially the opposition which would rather gnaw its leg off than forming a new coalition with a new prime minister when parliamentary elections are only a year away and EU presidency is looming like a giant storm.

Opposition naturally ran for cover, saying that Janša can do whatever he pleases, but that noone is thinking of toppling him just yet. Which is again very smart – they would rather see JJ shoot himself in the foot repeatedly for the remainder of this term. Chances are that he will. Unless JJ outfoxes them and does indeed resign. In that case all bets are off. But I don’t think anyone (let alone Janša) needs an unstable enviroment just because the people elected “the other” presidental candidate (i.e.: not one to Janša’s liking).

So Janša’s statement was the political equivalent of the corbomite manouver: Janša is threatning to hasten his political demise which would in short term provide a lot of joy on political left, but would quite probably backfire a year later at parliamentary elections, since there is little that can be done in a year’s time. So the opposition – although aware that JJ is bluffing – is suddently tiptoeing, because… just because… what if he isn’t bluffing?

6 thoughts on “The Corbomite Manouver”