The political turmoil of the past few days combined with my severe cold has prevented me from blogging about a very important development in Ljubljana- Slovenia relations. Namely: the Constitutional Court has finally ruled on motion of the City of Ljubljana (supported by three other municipalities) to repeal several articles of the Law on Funding of Municipalities. 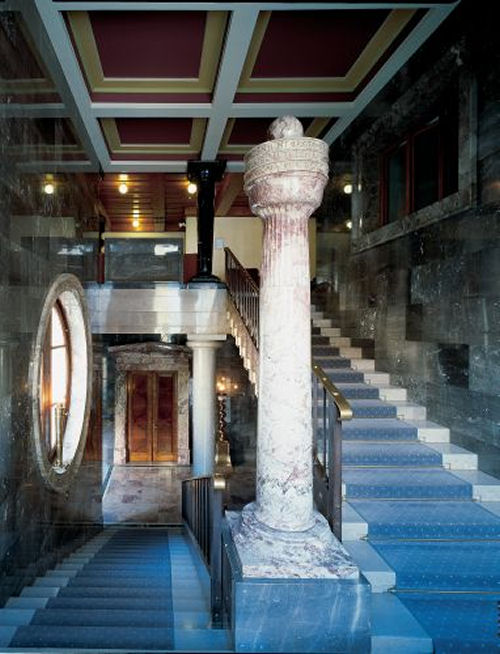 The inner corridors of Constitutional Court of the Republic of Slovenia


Now, some of you may remember this post, or even this post, when the City of Ljubljana filed a request to review the constituionality of the said law. So you now have the perfect opportunity to see expedience of Slovene judicial system almost first-hand

The fun part is that this actually is expedient. The Constitutional Court took slightly less than a year to rule on a very tricky matter. I won’t go into details, but the gist of it is that the Court decided that theyn (Janša & Co.) pursued a fair goal (spreading funds over several municipalities) but employed unfair (unconstitutional) means to achieve it. Not in the least by spreading funds so thinly that it made most municipalities actually more dependant on the state that they already are. The added “bonus” was that these funds were originally earmarked for the City of Ljubljana, but suddenly the capital was left with virtually nothing.

So, tehnically, the unconstitutionailty was twofold: firstly the effect of the law violated the constitutional provision that municipalities should be as financially independent as possible, and secondly that the change was immediate and absolute, without a transitional period (unconstitutionality here being that the government arbitrarily worsened the plaintiffs’ positions)

And finally, the Constitutional Court ruled that the Parliament must amend the said law within a year.

So what does it all mean politically?

Well, first and foremost, it is a huge political vicory for Ljubljana Mayor Zoran Janković. His political stock went through the roof, but unfortunatelly for him, all he can count on is to cash in on it furhter down the road. Because he ain’t getting the money. At all.

As I said, the Court gave the parliament a year to ammend the law, which puts the deadline for ammending the law well within 2008 election period. Add to that the fact that the state budget for 2008 is already passed and that the government only yesterday passed the 2009 budget proposal, and you can see that city coffers will not see the 60 milion euros that the government has unconstitutionally taken.

But more importantly, this ruling basically kills the proposed regional legislation which was on ueasy footing even before the ruling, as no political decision could be reached on the number of regions Slovenia is to be divided into (the numbers varying from six to absurd twenty-five, with government proposing fourteen). But with this ruling the Minister for Self-Government Janez Žagar is basically dead in the water.

Alongside Žagar, Finance Minister Andrej Bajuk took a beating as well, as it was his ministry which drafted the unconstitutional law which was more or less aimed at throwing cash at rural municipalities whose inhabitants were more likely to support the current government. On the other hand, however, Minister for Civil Service Gregor Virant (chief government negotiator with Mayor Janković) can take silent joy in the ruilng, because he admitted somewhat hastily in February that Ljubljana was wronged by the law (consequently, PM Janša sent lightning bolts in Virant’s direction) and – perhaps more importantly – he was locked in a bitter political struggle with minister Žagar, who wanted to change the structure of the entire civil service en passant while setting up regions. Virant, who – admittedly – has done a pretty good job at bettering the civil service, obviously went apeshit over it, but was until now unable to counter Žagar effectively.

And last but not least – the whole thing is a serious blow to Prime Minister Janez Janša, who exactly a year ago suffered a humiliating electoral defeat in Ljubljana and is now being bitch-slapped by a political newbie Zoran Janković. (do check out the link!). And he’s set for some serious asswhooping this Sunday unless the “october surprise” yields unexpected results.

But the PM’s got more important things on his mind right now. As you read this, he’s in China, asking “who’s president and when’s prime minister“. But not to overdo the joke, the fun part is that Janša (a former hardcore communist with residual dicatorial tendencies) is visiting only remaining communist superpower with emerging capitalist tendencies. It must feel quite bizzare for all of them 🙂