OK, so the title is a bit misleading, but still… Slovene People’s Party (Slovenska Ljudska Stranka – SLS) is opposing the proposed setllement of disputes between Slovenia and Croatia which Janša and Sanader have agreed upon Sunday last.

As always, one can always on SLS to stir the shit a bit – as it has done prior to 2004 elections, when party’s president Janez Podobnik created an international incident at border crossing Dragonja, where he tripped over a fence and then claimed that he was viciously pushed by Croatian police who were trampling on the sacred Slovene land. 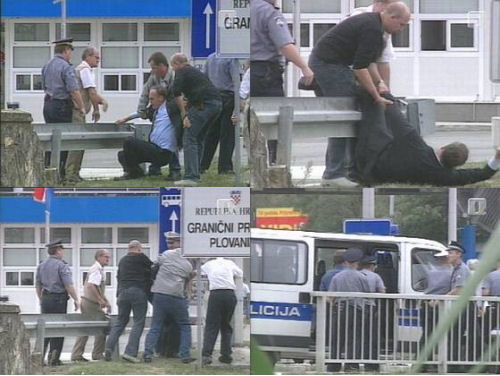 
Janez Podobnik was the only party leader who – only days later – was not elected member of the parliament, and it was in my opinion this incident which tipped the scale. Warmongering was never well received in this part of the world. But today, as Janša and Sanader seem to be on a brink of a breakthrough, Podobnik (who is now minister of enviroment) must (must) oppose their agreement, otherwise his pre-election stunt would turn out to be a load of bullshit that it was.


It’s a hefty bill of political folly to pay… If they supported the agreement, they would admit to their true intentons in 2004… If they opposed it (which they did), they risk looking uncooperative, which would not be well received. Add to that the fact that SLS is a member of the ruling coalition (it’s a tough gig, I know :D) and you can see why it is entirely possible that the party is on the night train to the Big Adios


But just to give you full disclosure, SLS has a special place in my heart – but I’ll write about that some other time. Suffice it to say that they’ve prevented a coup d’etat…