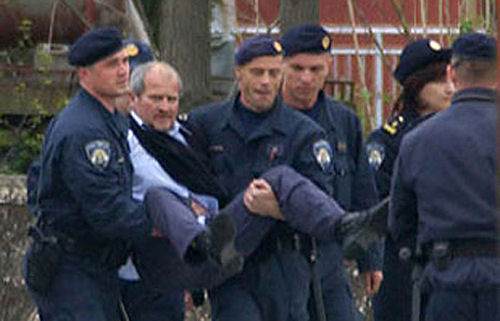 The PM has launched a semi-secret initiative to finally resolve the many disputes between Slovenia and Croatia (maritime border being only one of them). If we – for the sake of the argument – ignore the fact that this is the zilionth initiative to try to do that and that only one (1) has at least come close to being accepted by both parties (the Drnovšek- Račan agreement), then we could say that this intiative has potential.

Except that even Janša apparently believes that it doesn’t.


Forget for a moment that Slovene PM Janez Janša and his Croatian counterpart are still accused of rigging numerous border incidents – thus making their attempts at solving this thing higly uncredible. There is an entirely different telltale sign that the latest initiative is just a smokescreen: Janša is conferring with every political party in the parliament about this.


Sounds lovely. But the cruel fact is that it’s just a way of getting an issue off the agenda and preventing it from being used in election campaign. How can I tell? Because if there was only a tiny chance of actually striking a deal, Janša would take those chances and try to secure a political victory he so desperately needs. By involving all political parties he is making sure that everyone will share the blame for failure and will thus be denied a strong PR weapon in the upcoming election streak.

Less likely: He actually clinches a deal with both position and opposition parties. Odds are that (due to pre-election period) none od the parties – especially the ruling Blut-und-Boden coalition – will want to appear as if they’re betraying national interests and will take positions impossible for Croatia to accept. It will be a well publicised attempt, a lot of brouhahaha and Croatian government will protest vehemently that Slovenia is not proposing negotiations but is giving an ultimatum (which is totally unacceptable in today’s modern Europe, where Slovenia should – as an EU member state – lead by example rather than resort to extortion – I guess that would be the outline of Croatian response)

Janša can then claim that a) it was all the oppositions fault or b) just keep quiet, knowing that the opposition would be ill-advised to press him on this.

More likely: Janša’s move throws political parties in chaos, making them accuse each other of trying to sell out national interests, while he just shrughs and says “I tried, but I can’t do anything with these bozos”. Janša then has the exact same options as above


And so Joško Joras keeps on causing international incidents (someone lock him up for good, puh-lease!), the opposition has to keep its mouth shut or risk looking like morons and Janša and Sanader get to keep the shit-pan we call “Slovene-Croat border disputes” and stir it when their ratings drop.