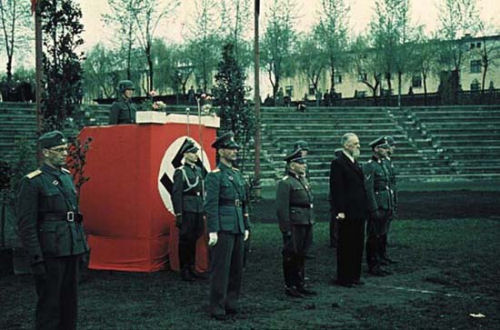 
Slovenes like to divide ourselves along various lines. Political, geographical, alocholical, etc… One is therefore not surprised when one finds out that Slovenia sports its own version of the old Jewish proverb. Show me three Slovenes and I’ll show you five political parties. Most of these divisions are rather benign and can be used as a sightseeing attracion, much like hooligan clashes with the police.

However, Slovenes seem to be unable to bury our dead. As avid readers of the more serious posts of this blog know, Slovenia and Slovenes have had a rather nasty World War II. Being earmarked for extinction (ethnical clensing is the modern phrase, I believe), divided between three occupying countries and split internally between guerilla resistance and collaborators.

It all brought plenty of pain and suffering to everyone and even today, more than sixty years later, there are still innocent people who have suffered greatly during the war. Previous (socialist) regime maintanied the hollines of the war and held a position that only those who were on the right side were victims, whereas others were not to be compensated for their trauma. This left our plenty of innocent civilians who were hurt by Partisan or Allied forces (either through mistake or malice), people who were forcefully drafted into German military (and usually sent to the Russian front) or who were mistreated because some of their relatives were colaborators.

It is a shame the previous regime failed to compensate them and it is indeed an ever bigger shame that in sixteen years of democracy this country hasn’t been able to do that. But why is that? Well, because it goes down to the very core of what Slovenia is about and what our values are.

With emergence of democracy emerged (or “re-emerged”, rather) a different vision of Slovenia. A vision held by those, who were defeated in WWII. A vision of a Catholic, anti-communist Slovenia, which has to claim its rightful place among the ancient European nation, a place which it was denied by the success of the Communist revolution and the social upheaval which followed the end of WWII.

It soon became clear, however, that the not-so-secret agenda behind it had called for nothing less than equaling those who have actively fought against the occupator with those who actively fought with the occupator. And it all came down to a bill, which in its present form equals both sides, allowing everyone who was involved to be declared a victim of war. This bill was introduced several times already, but it never made it through the parliament. It always stirred too much emotion, and that was not a good thing for a country that was on the fast track to join the EU and NATO. So it was swept under the rug for as long as possible. Until yesterday, when the right-wing parties re-introduced the bill in the parliament.


My position on the issue is well known and you may freely call me biased. The Bible sayeth: “Judge not, lest ye be judged!“. But I’m more than willing to be judged (at least on this issue) and I say “judge on, oh Pengovsky!”

Namely (and I will say this time and again, if necesary): There was no middle ground during WWII. Not in Slovenia. One had to chose sides. Some people chose unvisely and were ready to sacrifise their own nation to a “lesser evil”. Today, perhaps we understand their reasons better. Surely there must be place for forgiveness in our hearts and minds. Surely the choices of the losing side do not justify the attrocities that were commited when the war had already ended. But never – never – must a fight for a nation’s survival be equaled with condoning a nation’s destruction.

Yes, it is time for us, Slovenes, to finally bury our dead. But those who died for us to survive must be respected, and those who died in vain must be mourned and forgiven. But never glorified. Their deeds are deeds of us all. And their deaths only show that we must make moral choices every day and that we are not inherently right in making them.

27 thoughts on “Burying the Dead”