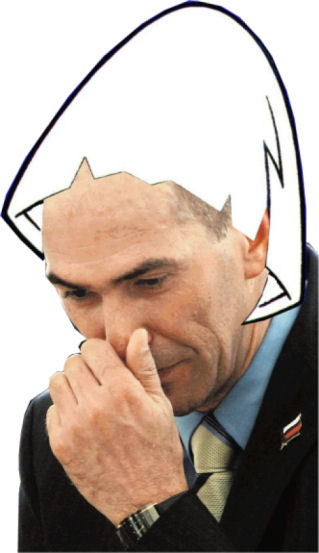 
-When his sweetheart is doing the nightshift, who does the PM cry to at night?

-Is Tone Rop going to stick to his guns?

-Where does Borut Pahor stand?


This and more in today’s episode of Slovene Spy Scandal only on pengovsky.com.


>>START COMMERCIAL BREAK<< Eve’s Drop. The best private-eye agecy in town. You want to know who your missus is shacking up with while you earn the bread for the familiy? Need some prime sin-unedno about your arch-politico-enemy? Trying to cut down on those sick-leave costs your lazy employees keep providing you with? Call us at 555-SPY-ON-ME. The best private-eye agency in town. Eve’s Drop.
>>END COMMERCIAL BREAK<<

OK… Enough fooling around. As you probably know by now, former PM Tone Rop basically accused the incumbent PM Janez Janša of high treason. The latter seems to have lost his nerve a couple of days ago and demanded a public apology or else…


…or else he will sue Rop for slander. And I went: Huh? That all you got?


Naturally, Rop categorically refused to apologize, calling Janša’s bluff who will now have to make good on his threats – or risk looking like a pussy.


So what we are seeing now in Slovenia is the begining of a very long political endgame. Thusfar, Janša seems to be on the defensive, but I’m sure he’s got an ace or two up his sleeve, so don’t write him off just yet. On the other hand, Rop seems to have little to lose. He’s past his political prime and is apparently softening Janša up for Pahor to take him on after the presidential elections where Pahor will not run for president, declaring that he will lead his party in the ultimate battle at Slovene political Armageddon in 2008 (the parliamentary elections).

And in the midst of preparations for what will probably be the showdown of the century Janša goes crying to a judge for slander??? Either a gross miscalculation in political terms, or I’m missing something here…