Oh, yeah, BABY! I don’t know whether to laugh or cry. I’m definitely not emigrating, though… This is waaaay too much fun ❗ 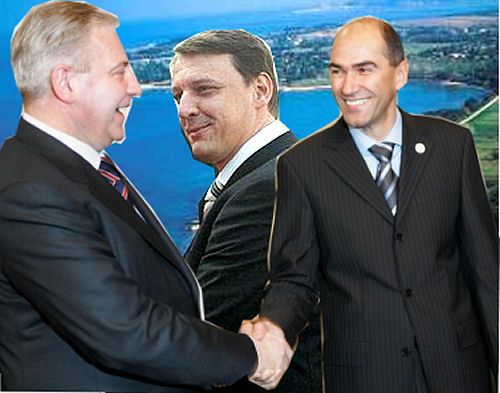 Item #3: Former PM Tone Rop (also formerly of Liberal Democrats, now of Social Democrats) confirms the claim and goes on to add that Sanader and Janša (then still as leader of the opposition) coordinated border skirmishes in the Bay of Piran, the disputed area of Slovene-Croatian border in the summer of 2004. Full disclosure: Rop lost elections to Janša in the autumn of the same year. (Pengovsky goes: Holy shit! Rop, are you serious?)

Item #4: Janša goes nuts over Rop’s claims, saying that no such records exist and thus either Rop is lying or there was a rouge tap and goes on to say that Rop should resign immediately. (Pegovsky goes: Wow! Dude, hold your fire!)

Item #6: Janša appears on state TV for some obvious damage control. He states that the spy affair should end soon and that the media should focus on reporting the good economic fortunes of the country instead (Pengovsky goes: WTF?!?… Is the PM really telling me what to report?!?)

Item #7: Rop appears on Svet na Kanalu A and responds by saying that both Janša and Sanader are acting suspiciously nervous. (Pengovsky goes: Neither was he the texbook definition of relaxed)


Now…Could Rop be making it up? Possible, but not likely. Why would he? Rop is not a political idiot others try to make him look and surely he’s aware of the consequences of his actions.

So… Is Janša lying? Again: Possible, but not likely. If you look at his responce closely, Janša is very careful to categorically deny the statement that he arranged the incidents directly with Sanader, as for the rest of Rop’s statements he says that there is no proof. He doesn’t deny the claims.

And most importantly: Sanader does not utter one word of denial. He does say that Rop is acting stupidly, but there’s an evident lack of direct denial.


P.S.: What everyone seems to have overlooked is the fact that Slovene spies actually managed to eavesdrop on the confabulations of the Croatian prime minister. If I were Sanader, I’d fire my counterintelligence chief toot-suite…