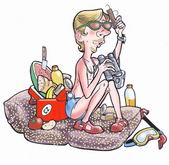 
Dead giveaways: Rather tame and unsure. Are on a par with Germans as far as lack of style is concerned.

Necessary beach accessories: Mini-fridge. Unlike Germans, who carry all sorts of exquisite cuisine in it, the Czechs carry all sorts of cheap pates. Rubber sandals. A diving mask and a snorkel, for diving in two feet of water. Low-quality inflatable pillow.

Pick-up lines: “Co to je?” They’ll probably use it to find out what dish you ordered in a restaurant and then order the same for themselves. While on the beach they use broken English, trying to tell you that the two of you can get along perfectly without much verbal communication.

The secret of success: Shyness. Plenty of women out there have an exaggerated and over evolved maternal/protecionist instincts and if anyone can trigger them – it’s the Czechs!

Evasive manoeuvres: That’s easy. Just use a cold stare. They’ll bug out immediately. They are not likely to hold a grudge, which in this case is a great plus and saves them a lot of grief.


Dead giveaways: Sports-crazy, usually wearing a sporting outfit and always on the move. You’ll have a hard time finding them on the beach or in a pub. If by any chance they’re not wearing their sunglasses, you’ll have no trouble guessing their favourite brand of eyewear – Oakley, judging by the shape of white skin on their face. They will usually drive a bright-coloured car, and when they start pulling out all that sporting equipement, their ride will resemble a Sport Billy bag.

Necessary beach accessories: A surfing board in one hand, water-skis in the other, and a free-climbing rope around the belt, because you never know…

The secret of success: Looking fit and vibrant.

Evasive manoeuvres: You don’t want to evade Slovenes, but most likely won’t get the chance anyway. Namely, they’re so self-confident and uninterested in the world around them (it’s just a posse), that you’ll have to draw them a picture if you fancy one of them. In Technicolor. But still, if you do get bored by a Slovene, show up in full make up and ask them if you can surf in a skirt. Tell them in confidence, that you don’t really like sports, that you’re not all that sociable and that you prefer a massage and a candle light dinner. 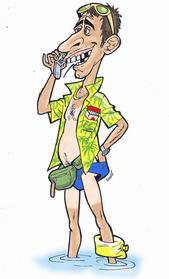 
Dead giveaways: A rather loud bunch, always merry and when talking on the phone they always scratch their ass. Inside their pants! It’s a genetically imprinted trademark, so whenever you see a guy doing that, you can be sure that at least one of his parents is Bosnian.

Necessary beach accessories: Two mobile phones and – a smile. Even if there’s only two of them, it feels like there’s a beach full of them. If you lost sight of them – check under your towel!

The secret of success: Pure boyish charm. There’s no way to get rid of them roughly. They’re so charming that you’ll find it hard not to at least smile at them.

Evasive manoeuvres: Simply introduce them to your gorgeous girlfriend… 😀

10 thoughts on “Some Pointers For Summer Vacation (pt. 2)”