To keep in line with the Liberation day/May day spirit… Les Canadiens came up with the idea of visiting Partisan Hospital Franja. And so we did…

Hospital Franja is located in the canyon of Pasica stream… 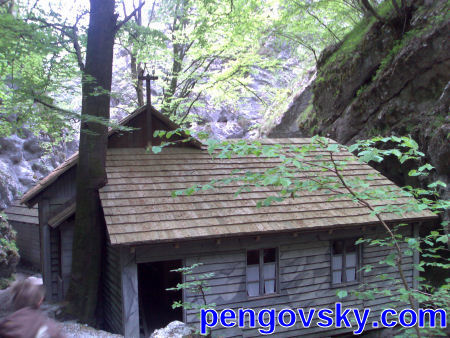 … and is a part of European heritage


Partisan hospital Franja was in operation from 23 December 1943 until 5 May 1945. It got its name after chief surgeon dr. Franja Bojc Bidovec and is located in the canyon of Pasica stream, near Cerkno in Notranjska region.

The hospital itself had a couple of other (outer) units and took care of some 1000 wounded, but the core unit, which we visited yesterday, treated 522 wounded Partisan and Allied soldiers in a year and a half of its operation. It consisted of 13 huts and had an independent source of electricity and thus elied on the outside world just for food and medical supplies. The hospital treated mostly wounded from the field of operations of IX. Corps (this included areas west of Ljubljana all the way to Trieste and even Venezia region in Italy). The canyon as such was attacked twice by Nazi army, but was never taken and the hospital was never located by the Germans, in part thanks to its remote location and in part thanks to its intricate net of bunkers and minefields. The only was to reach it was upstream of Pasica, which I can tell you would be difficult even today. But back in 1944 they had to carry the wounded on stretchers, upstream, possibly during the night and in battle gear, under the constant threat of fire and/or betrayal. One of the security measures was also blindfolding the wounded on their way to and from Hospital Franja.

In terms of total was casualties treating 522 wounded is not much, but it was one of at least two such “field” facilities which were created by the Partisan Army immediately after Italy surrendered in 1943 and the only one to remain intact to this day. The other one was Partisan hospital Pavla, near Idrija, but was demolished shortly after the war.

Partisan hospital Franja was both an effort to treat the wounded and an effort to boost morale, letting the troops now that there is a place that will take care of them if they take a bullet. Of course it wasn’t a top-notch medical facility, but it was probably the best field medical facility in the area Partisans had. It recently became a part of European Heritage.


Oh, and here is a great VR tour of the hospital! Unfortunately only in Slovene