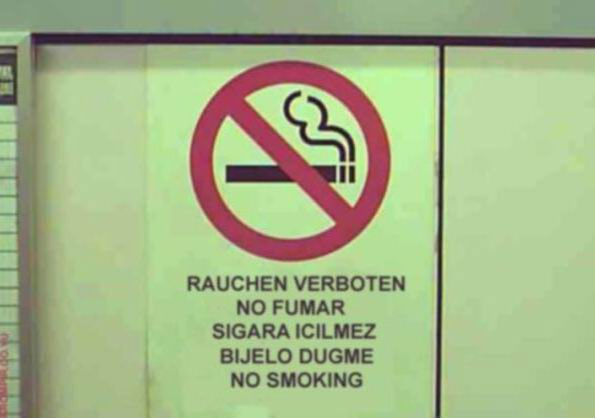 Things are too serious not to be taken lightly 😀


I stayed out the anti-smoking legislation debate, mostly because I have a rather ambivalent attitude towards the issue. As you know I smoke, but I understand that people who don’t would like to come home from a bar not smelling like an ashtray. On the other hand, I also hate the idea of being forced into the street from a bar if I wanted to enjoy a fag with my Guiness.

Numerous bloggers already posted on the issue, so I’ll refrain from repeating what was said already. But a thought occured to me while reading these two posts (via Jonas Ž.). How much did I spend endangering my life?

Let’s compare things: Smoking is not unlike driving. It’s a calculated risk, taken by an individual. When I light a cigarette, I am endangering myself and those who happen to be around me. But when I drive a car, I am also endangering myself and those around me. So isn’t banning just smoking a bit hypocritical, if what the Minister says is true and he’s really concerned about the health of his fellow citizens? And aren’t people who claim to have saved a fortune by quitting smoking just slightly off the mark?


Below are two calculations (not exactly precise, but close enough):

I smoke for four years now (give or take a few months). I estimate that I smoked three packs of cigarettes per week on average. I started with half a pack a week to about four a week now (at least a third of that during my Saturday night gig at Cutty Sark). I also estimate that an average price of a pack in this four-year period is abot € 2. Both estimates are a bit exaggerated, just to be on the safe side

So, I spent on average € 318 yearly endangering myself and those around me, or a total of € 1272 in the past four years. Not exactly cheap, but not utterly pocket-cripling either. To put in economic terms, I spend a little less than a basic Slovene sallary.

I’ve had this particular ride for eight years now. I also made a couple of assumptions, especially the one about price of fuel. A litre of 95-octane gas is priced at € 0.95 now, and I have no idea what the price was in 1998. Also, I think that the amount of € 300 for maintainence is just about right, when you think that you have to do a major check-up every now and then, occasionally buy a new set of tires, change the lightbulbs, wiper-blades, etc.

As you can see, I spend almost six times more endangering myself and people around me by driving a car than by smoking. Add to that the fact that I’ve crashed the car three times in those eight years, causing more than € 6000 of damage in total, and it becomes obvious that driving a car is much more costly.


Given the numbers I think that there is little financial benefit to an individual when this law will come into effect. Also, given the fact that every fatal car crash costs the government circa € 750.000 (I kid you not), perhaps the government should also start considering a ban on using motor vehicles in public areas.

As I said – it’s a calculated risk. But it’s a risk I’m willing to take. For now, at least.


I have no illusions as to the fate of anti-smoking legislation. It will be passed and (in the beginning at least) vigorously enforced. I understand that.

26 thoughts on “Smoke On The Water”