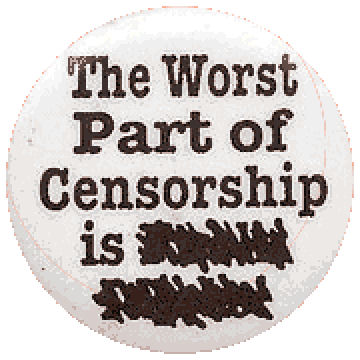 This country never ceases to amaze… Thanks to nymphee the Gušti Affair caught my attention.

To summarise: Disctric Court in Ljubljana ordered Gušti and SiOL to take down a post where Gušti shared his impression and encouters with Ana Jud. She was rather displeased with the contents of the post and filed a suit against Gušti and SiOL. A part of the suit was also a motion to temporarily take down the post until the issue has been resolved. In Slovene legal terminology this is called začasna odredba, something like a temporary order

A temporary orded is a legal instrument which can be filed by the plaintiff in order to prevent any (further) damage that might occur in the period between his/her filing of the suit and the final rulling of the court. In this case Ana Jud apparently claims that the contents of the post amounted to slandering and sued the man.

While Pengovsky is not a lawyer he is rather familiar with the Law on media and the judicial practice on slander-cases. Now, Ana Jud’s motives are questionable at best and the contents the post in question are in my opinion quite harmless, but the case raises several interesting questions:

The Law on Media does indeed regulate web publications or web media. While inherently different fromy “traditional” media, the web media must conform to the same rules and procedures as any other media. I.e.: They must be registered with Ministry of Culture, which includes an appointed Editor-in-Chief. But what about a blog? Is blog a mass-media?

In a way – yes. It is intended to be read by other people. It is in fact no different than a book, a newspaper, a magazine, a radio or television.

But in a way – no. It is not a mass-media product as such. It is not distributed, it does not have an editor-in-chief as the owner is ussually (but not always) the sole writer, it does not necesarily publish regurarly, the author’s identity is not necesarily known, et cetera… From this perspective a blog is much more like a book than a newspaper. The closest analogy is of course some sort of public “personal diary” – which is also a book. And some diaries even get published.

Thus, we’ve shown that a blog (singular) is exempt from the Law on Media, because it lacks features that media in Slovenia must have to call themselves media – the most notable of all being that a blog is not registered with the Ministry of Culture.

The story is somewhat different for the blogging service provider (in this case SiOL). This particular provider runs a variety of other services as well and IS registered with Ministry of Culture. As far as I know, SiOL blogging service even has an editor-in-chief which means that Marko Crnkovič is in not-so-shallow doo-doo as he is legally responsible for any and all content of SiOL blogs.

Now: is the owner of the blog responsible for its contents? In short: yes. Everyone is (except under-aged persons) is fully responsible for opinions they make public. If I were to go to a park, take a lung-full of air and started yelling that Ana Jud is a pompous bitch who doesn’t know her mouth from her cunt it would be the same as if I posted that very same sentence. Either way I made my opinion public and must take responsibility for it. It can be considered slander unless I can prove otherwise in a court of law, should she make the mistake of sueing me. Item number 3 is thus dully aswered

But the real question is: does this amount to censorship? No. Not from a legal point of view, at least. This is a classic case of one person’s freedom of speech clashing with another person’s right to personal integrity. Again – I’m not saying that Ana Jud actually has a case. But neither is the court saying that. What the court did was just temporarily suspend the publishing of this particular blog entry until the matter has been resolved. And should it emerge that Ana Jud acted in bad faith, Gušti and SiOL will definitely have a case agains her.

Censorship is by definition imposed by the same entity which feels threatned by a certain content. Thus – were Ana Jud by any chance SiOL’s editor in chief and had she forced Gušti to take down the post, that would be censorship. But the court’s decision is (again) temporary and was delivered (presumably) upon due consideration. One must know that in a civil suit the burden of proof lies with the defendant (and not with the accuser) so in court’s view Ana Jud’s claims have merit thusfar.

And one more thing: One of the earliest issues of Direkt ran a story about Dora Plestenjak supposedly molesting her grandchild. The Plestenjak family did exactly the same as Ana Jud did – they filed a motion for a temporary order, preventing most copies of that particular issue ever reaching the stands, and then filed suit against Bojan Požar and Direkt.

The lesson: While blogs are created by private citizens, they can have public consequences and are not exempt from the law. It is just sickening that an excellent musician ends up at the wrong end of stick held by a below average would-be reporter.