Since the hubbub on the impending #Grexit has, for now at least subsided or – at the very least – morphed into #Agreekment, a short update on the sorry state of Slovenian politics beckons. For it would seem that we have entered the Transfer Window. 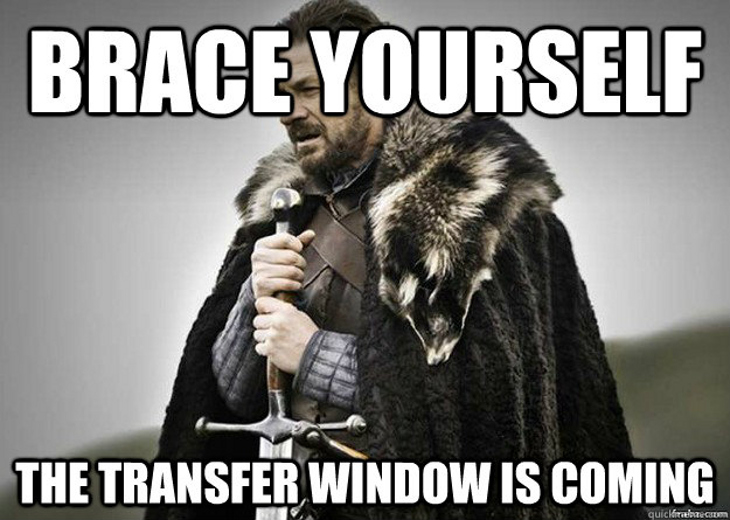 To be honest, what was and still is happening is peanuts compared to the sabre-rattling which occasionally threatened to break up the coalition, mostly along the privatisation fault lines. And although a full-scale political crisis was never a real possibility (not with the current distribution of power, at least), there was enough bad blood accumulated that some sort of a fallout was inevitable. Curiously, however, these tremors are not limited to the government of Miro Cerar only but are, for now at least, equally present in the opposition as well.

It takes a certain amount of ingenuity to re-re-rat

The big shocker was the parting of ways between former eternal foreign minister Dimitrij Rupel and his political home of the last decade, Janez Janša‘s SDS. Rupel, a long-time LDS cadre under Drnovšek famously switched sides in 2004 and crossed over to SDS where he continued his diplomatic exploits. After Janša 2.0 government was toppled, the man fixed himself a cosy cushion to land on, having the outgoing government appoint him Consul General in Trieste (a prestigious but not all that demanding a position). However, he was axed from the position by his successor at the foreign ministry, one Karl Erjavec, following the letter of the austerity legislation, passed by Janša’s government (oh, the irony!) which stipulated that all civil servants over the age of 67 must retire, unless their superior finds a particular use for them. Needless to say Erjavec found no particular use for Rupel.

In fact, even before Teflon Karl started wielding the axe, Rupel and his supposedly coveted black book of contacts have been declining in demand. Which sort of made everyone think the man has finally thrown in the towel and limited himself to lecturing on a faculty of, shall we say, wanting reputation. After all, he clocked in his forty and should be able to enjoy the fruits of his long and illustrious career (give or take). Which is why it came as a complete surprise that he publicly announced his parting ways with the SDS. Quitting the Party is not small potatoes, because it was long assumed that if you in the Party, you in the Party.

Not so for the old fart Dimitrij. The Party, reeling from the massive haemorrhaging of resources to defend the Leader (that be Ivan) from the subversive communist abuse of the judiciary (that be The Patria Affair), just launched its shadow cabinet, a.k.a. SDS Council of Experts. Now, Rupel was apparently aiming at chairing the Foreign Policy Committee, but was passed over for Milan Zver MEP. This infuriated Dimitrij to the point of packing his shit up and leaving. He claims he was being punished for a recent interview in Reporter magazine where he (let’s be honest) failed to praise the Leader and swear to his infallibility. Instead, not only did Rupel had the guts to speculate on the post-Janša future of the political right, he even had the balls to state that there was, in fact, a period in Slovenian history where Milan Kučan (Janša’s arch-enemy) played a positive role. The nerve!

However, one could be excused for not entirely buying into Rupel’s self-righteousness. He is probably the only politico in this country which could possibly lay claim to have done a proper Churchill. Because anyone can rat. But it takes a certain amount of ingenuity to re-rat. Which is exactly what Rupel has done vis-a-vis Janša, parting ways in 1994, only to rejoin Janša in 2004 and now, another decade or so later, parting ways yet again. The conclusion here is simple: if Rupel is in search of a new political master (possibly Miro Cerar’s SMC), then the SDS is indeed in deep trouble since Rupel, one of the great survivors of Slovenian politics, apparently sees no further use for it. And parties which Rupel discarded himself of as un-prospective soon turned out to be politically marginalised and – ultimately – dead. Case in point every of his previous political dwellings: Slovene Democratic Union (SDZ), Demokrati Slovenije (DS), the once-mighty LDS and now SDS.

If political bellwethers such as Rupel are anything to go by, then the SDS should start worrying. However, one should not have high hopes for the SDS to change course any time soon. In fact, regardless of some pretty obvious intra-party opposition, the party proper is by and large committed to its president, increasingly creating a universe of its own and interacting with the reality the rest of us are experiencing only when need be. And before either of the two readers of this blog start pointing out the @prenovljenaSDS (reformed SDS) Twitter account it should be noted that the account might just as well be a ploy of Janša to see who follows the account and thus single out the descenders within his ranks. Just sayin’ 😉

Not that the SDS is overly concerned, it seems. Because, although they’ve lost Rupel, they’ve gained (for all intents and purposes) Aleš Hojs, nominally one of the VPs of the ChristDem NSi, but in reality a tr00 JJ fan. Namely, after the NSi declined to join SDS shadow cabinet, continuing on their own course (an approach which served them well ever since they found their spine a couple of years ago), they poached Hojs and co-opted him as shadow defence minister, thereby sticking a wedge in both NSi leadership as well as rank and file where Hojs does have a certain amount of clout.

The NSi is, for the time being, choosing to ignore the issue and Hojs nominally still remains a member of the NSi senior structure, but they will have to get rid of him expeditiously. The bad blood between the former S/M partners of the political right keeps on accumulating and the NSi with its new-found confidence and a couple of policy scoops under its belt (notably, the recently passed law on post-WWII grave-sites) will not be able to tolerate in-party insubordination and impunity.

But such solo acts can last surprisingly long. Case in point being Bojan Dobovšek, until recently an MP for SMC of Prime Minister Miro Cerar. Namely, Dobovšek quit the party months ago, citing “continuing old practices” in filing governmental positions, hinting and cronyism and corruption. But you could not be blamed for thinking Dobovšek was – not unlike Rupel – sore for being looked over when booty was split. In this case, he was widely tipped to become the minister of interior.¸But the spot went to Vesna Györkös Žnidar, while Dobovšek quit the party but remained a member of the SMC parliamentary group. Which is technically legal, most unhygienic and sure to generate a lot of media attention. If you catch my meaning.

However, about two weeks ago Dobovšek quit the SMC parliamentary group as well, thereby changing the internal relations within the coalition. Because with him gone, the Social democrats, most junior of coalition partners suddenly started to make a difference, as they provided the votes necessary for the coalition to claim a majority. While Dobovšek was on-board, the SMC and DeSUS themselves had 46 votes with SD more or less simply providing the body-count.

But with the man gone, SD leader Dejan Židan started boasting how the party will now claim its rightful spot, prompting DeSUS main honcho Karl Erjavec to tell Židan to get off that horse and not get ahead of himself. At that time it seemed as if Teflon Karl is (finally) suffering from a case of bruised ego. Little did we know the old trickster was about to do some political poaching of his won. Late last week Peter Vilfan of Alenka Bratušek’s ZaAB announced he is switching allegiances and crossing over to DeSUS.

Vilfan, former professional basketball player (hence the title of the post) started out as an unlikely politician in Ljubljana city council, first elected in 2005 on the coat-tails of Zoran Janković’s sweeping mayoral victory and then – in similar vein – to the parliament in 2011. He quit the city council in February 2014, officially due to corruption charges against Janković, but was rumoured to have ulterior motives in a real-estate deal that a city council vote on a news zoning plan about that time would enable and wanted to avoid unseemly appearances.

Anyhow, Vilfan resigned as MP a couple of months later as well. He was involved in a traffic accident, hitting a pedestrian with his car and was a DUI suspect. To his credit Vilfan did not try to skirt the issue but quit almost immediately and paid the hurt senior citizen a visit in the hospital. Luckily, the victim only suffered a broken arm and a lab analysis showed Vilfan was not intoxicated while driving. In a sense he kept to a standard of political hygiene that one would expect from a representative of the people. Which, sadly, is news in Slovenia. But it probably also helped Vilfan get re-elected in 2014 snap elections as one of four MPs of Alenka Bratušek’s fledgling party ZaAB, which splintered off from Jankovič’s Positive Slovenia. But soon after AB’s failed Euro-bid, things went south there as well, culminating for now in Vilfan switching teams.

Adding insult to injury, DeSUS not only picked up an MP, bringing their total to eleven, they also again marginalised the SD, giving enough votes to PM Miro Cerar to marginalize the most junior coalition partner and – not to be overlooked – being able to drive an even harder bargain protecting their particular interests in an already sluggish privatisation process.

Now, it seems plausible that Vilfan jumping ship on Bratušek will start an exodus from the party group. Well, exodus might be overreaching a word since after Vilfan’s departure the ZaAB party group is down to three MPs, a minimum required to actually be a parliamentary party group rather than just a set of independent MPs and enjoy the perks that come with it, such as participation in committee memberships.

But the point is that remaining ZaAB MPs may well be on the market as well. Save former PM Alenka Bratušek herself, although given the egotistical lows she performed after successfully bringing the country from the brink in 2013, it is not entirely inconceivable she’d quit her own party group, too. But that’s just pengovsky being evil. More realistically, rumour has it that Mirjam Bon Klanjšček is to follow in Vilfan’s footsteps and make DeSUS male/female ratio look better come Autumn, the big question is just what exactly will Jani Möderndorfer do.

The man with a plan, the other great survivor of Slovenian politics, he hasn’t placed a bad political bet in his life. At the very least ever since he helped start a rift in the Ljubljana section of LDS in 2002 which ultimately led to the party breaking up and emergence of Zares (of which he, ultimately, was not a member). He then stuck with Janković all the way to the parliamentary elections in 2011, emerging as leader of the largest parliamentary group. But when things came to a head within the party in 2014 and Janković came to collect, Möderndorfer chose PM Bratušek over Janković. Wisely so, it transpired, since Janković’s Positive Slovenia proper did not make it above the 4-percent threshold in 2014 elections, while Bratušek’s ZaAB did, just barely.

Therefore, it will be interesting to see if Möderndorfer jumps ship as well or will he go down with it for the first time. From where he stands, both are equally legitimate. The interesting part is that he now faces a dilemma not dissimilar to that of Dimitrij Rupel: does he quit politics and gets a job (he is, among other things, a certified sign-language interpreter), or does he make another leap, possibly finding himself on the same boat as Rupel – as a member of the SMC.