Apart from voting in a few mayors, Slovenians will be casting their votes on the referendum on the new Family code, the very piece of legislation which reignited the culture war which (truth be told) never really stops in Slovenia. It only rages with different levels of intensity. This time around, the Gates of Hell seem to have opened and the forces of darkness descended upon this sorry excuse for a country. 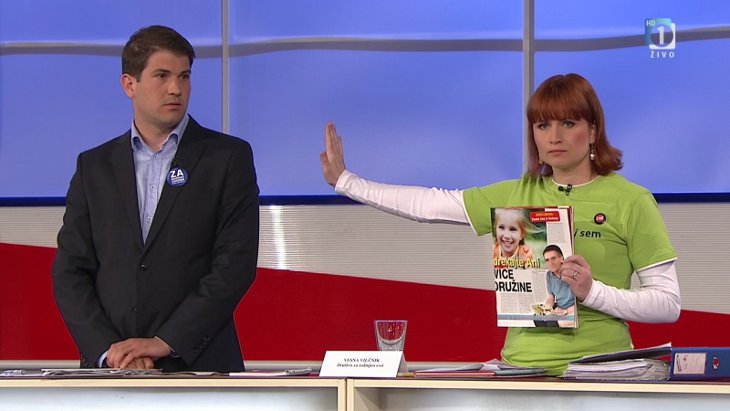 Talk to the hand, ’cause the face ain’t listening. Vesna Vilčnik (NO) shushes Miha Lobnik (YES) (RTVSLO via @milijonar)

During this campaign the amount of lies has reached unprecedented levels. Even the referendum on arbitration agreement with Croatia saw less bullshit produced by those who opposed it. Indeed, this time around we saw the whole plethora of lies, fearmongering and deceit. Everything from claiming that the family code brings “homosexual education” to schools, that children will be taken away by the state if parents will not have them vaccinated and that the code provides for surrogacy. The natural order of things will be dismantled, Slovenian society as we know it will fall apart and the world will end. This is not my rendition of opponents’ statements. These are their statements.

So, what’s it all about? This, this and this, basically. The Family Code, which was passed by the parliament and then put up for a referendum by an astrotuf movement headed by Aleš Primc and heavily backed by the Roman Catholic Church, basically provides for legalisation of most (not all) family situations, giving both children and adults with a legal framework within which they can operate even if they are not a “traditional”, mother-father-offspring family. It should be said, that – although finally provided – this framework still differentiates between various types of families. For example, a same-sex union, while equal to a heterosexual union in virtually every other aspect, is not allowed to adopt children unless one of the adults in the union is a child’s biological parent.

But that doesn’t really matter, because what is at stake here, is not really the right of individuals to marry and have children (at this point, most opponents will hurry to assure you they have a number of gay friends), but the fact that the conservative, reactionary visions of a society where “everyone knows their station” are fast disappearing. In fact, the definition of family and the moral imperative which stems from it, is one of the last pillars of a rigid and pre-modern concept of a society champinoed by the Catholic Church and others who take it upon themsevles to be the ultimate judges of the morality of others. This is not about families, nor it is about partners or children. It is about control. Who gets to decide what’s wrong and what’s right. In a modern society, individuals do, with the caveat of entrusting the care for the common good to the state. In a pre-modern society, the self-appointed moral and spiritual leaders do, often asking to be followed blindly. Because. They. Know.

Which is why they feel they can sell even the most epic of bullshits. Indeed, the whole NO campaign is not unlike the US Tea Party movement and the level of agressiveness brings about memories of frenzied Republicans shouting Barack Obama is a Muslim terrorist during the 2008 US presidential campaign. Even more, the lies of the NO campaign are on the same level as Michelle Bachmann‘s “death panels” during th Obamacare campaign. In fact, the whole NO campaing seemed to be picked up from an old Reublican handbook. It doesn’t matter how far out the claim is, as long as it keeps the ball roling and the enemy engaged, making him spend time and energy debunking the latest crack-pot claim. Like the one that the Family code is full of secret keys. What do they do? Explain the Mayan calendar?

Voting yes on the referendum on Sunday will mean a) that adults will be able to love whomever they like and in a manner they see fit, not hurting anyone, b) children will have a better chance of being with a loving family and c) no self-appointed “higher authority” will be able to tell you what a) and b) in fact are. Voting no, however, will mean that things stay exactly as they are and a lot of people, who pose no threat whatsoever to anyone, who could have it better, will not be able to do so. It’s that simple.

Everyone deserves to be happy. ZA.