Wait, what? A group of perps repotedly broke into a government parking lot over the weekend, vandalised several government vehicles and spray-painted some hate graffitti on the walls, the whole thing totaling to about 6k euros in damage. OK, tough shit, you say and a good excuse for the government to buy some new wheels in times of crisis. But there’s a catch. A couple of them, actually… 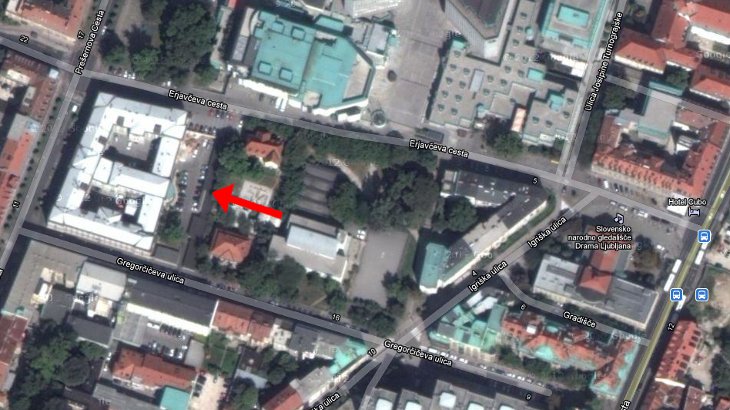 First and foremost: the perps apparently made their escape. Sure, a quicky, you say. In-and-out, no sweat. The only problem is that the parking lot in question is walled from all sides. Pengovsky’s line of work took him to that particular building on quite a number of occasions and although it’s no Guantanamo, the security is pretty heavy. Not in the least in the form of steel automatic door which can only be opened from the inside by the guard. In fact, in addition to a security detail just beyond the door, there are uniformed cops on both sides of the building (that would be norht and south on the photo above) not to mention the CCTV system. Although the latter was apparently conveniently out of order.

Yup, you read it correctly. The executive centre of the country (well, half of it, the other half is across the street to the south) was without CCTV surveillance for an extended period of time. Officially since August, no less. Which is weird. Doubly so since this was not leaked (not to mention publicly known) even though the previous government in it’s dying days was leaking sensitive information by the bucketful. And if you really want a full serving of bullshit: the CCTV system was down “due to a lightning strike”.

This is the point where alarm bells start ringing. A lightning strike? Really? Call me stupid, but I thought lightning strikes the taller buildings. This particular piece of late 19th century architecture only has two storeys while a couple of buildings in the immediate vicinity… no, scratch that… all buildings in the vicinity are markedly higher than that. Not to mention that the Ljubljana Twin Towers, both of them reaching fifteen storeys high are only two hundred metres away. Lighrning strike was almost surely not the cause of the outage.

Ready for more? The cars were vandalised with granite cubes, not unlike the ones that were hurled into the parliament almost two years ago. Theories have been floated since that the outbreak of violence back then was not so much alcohol-induced but a carefuly orhestrated attack by right-wing extremists which have infiltrated the protest, while the blame was then shifted onto left-wing activists (some of whom now comprise the local branch of Occupy movement). Point being that the MO is similar and that the parallels are drawing themselves.

So, to recap: a government compound, walled from all sides in the center of the city in a well guarded goverment quarter, with uniforms outside and (supposedly) a security detail inside, under CCTV suveilance (conveniently out of order) was broken into, cars and walls vandalised and no one saw a thing?!.

This bears all the hallmarks of an undercover operation, not unlike the series of incidents in 2007, some six months prior to presidential elections, when the target of a similar operation was the late President Janez Drnovšek. And curiously enough, the building to which the said parking lot is attached also houses the Office of the President. And we’re up for presidential elections later this year.

You do the math…

UPDATE: The website of SDS-owned Demokracija magazine claims that “leftist extremists” are behind the incident. QED.