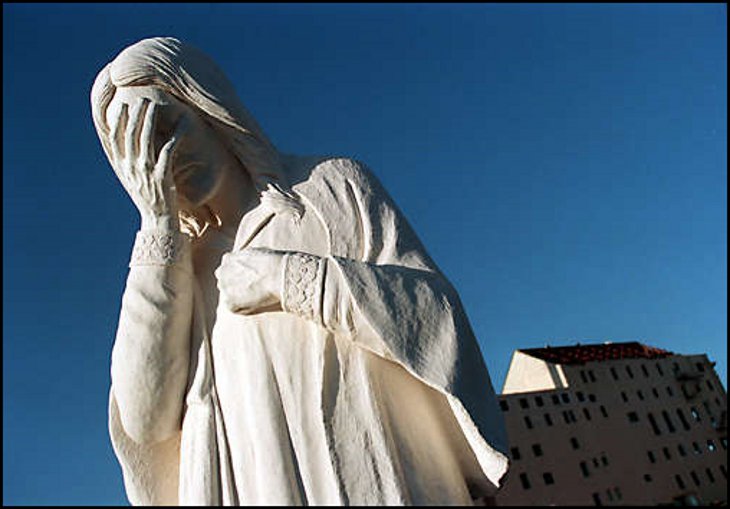 You’ll see what a palace he had built for himself with the fortune
comparable only with Byzantine Caesar or the Great Khan of Tartars.
Now you probably understand why he issued all those bulls against
the idea of poverty. There are crosses in Avignon with Christ crucified
but with only one hand nailed to the cross while he’s touching a purse
around his waits with the other, as if to say that He approves use of
money in ecclesiastic matters.

The above passage from Umberto Eco‘s The Name of The Rose came to mind when pengovsky first heard of the financial hardship the Maribor archdiocese found itself in. And Lord, are we talking hardship. According to an article in Italian L’espresso (in English, surprisingly so), which exposed what until now was only alluded, the archdiocese, which gives guidance to a flock of some 100,000, ran up a debt of some 800 million euro. No, it’s not a mistake. Eight hundred million. That’s more than three times the amount of Slovenia‘s share in Greek bail-out. I won’t bother you with the details, especially since you can read them up in the original article. Suffice it to say that they’ve put all of their eggs in a couple of not very safe baskets and then forgot to watch the baskets. And now they can’t even make an omelette out of broken eggs.

Not that the archdiocese is helping its case. Their official response was full of hypocrisy, false humility and other nouns we’ve come to connect with the Roman Catholic Church. Namely, thev’ve written that they “are aware of their indirect responsibility to shareholders, employees and the public. Our special responsibility goes to people of Catholic faith and all those to whom we were sent to spread the word of Christ and help them in times of hardship. We realise that in the past we have not always made it clear that ours is purely a mission of spreading the faith, education and charity. In the past the Maribor archdiocese has focused on economic matters only to fund and further develop the above pursuits. Our goal was to strengthen our financial positions to better execute our pastoral, educational and cultural activities. These activities are in many countries partly funded by the state. As this is not the case in Slovenia, we tried to establish an economic presence. Today, we realize that this was a wrong decision.”

It is highly tempting to go ha-ha (<- click the link, goddammit! 🙂 ) on the Maribor archdiocese (or on the Slovene Roman Catholic Church as a whole), especially since the clergy took virtually every opportunity to bash the Slovenian noveaux riches which have lately been distilled into failed tycoons a la Boško Šrot, Igor Bavčar (remember them?) and lately Bine Kordež of Merkur and Ivan Zidar of SCT. And suddenly, that same organisation, primarily tasked with spreading His word, love for little boys and preventing use of contraceptives turns out to be on the fast track to the fourth circle of hell.

Slightly more than a year ago there was a lot of talk about “exit strategies”. You know, getting back to the business as usual. Back then there were a couple of competing documents, all of which fancied themselves as “exit strategies” and all of them failed to deliver. One of those documents looked beyond the scope of immediately visible and while it didn’t provide answers it pointed out most of the right questions. The problem is that it was outside of the (still) accepted neoliberalistic socio-political discourse and it was quietly forgotten. Everything that followed in its wake were either half-baked compendiums of various semi-useful theories often contradictory in nature and content, badly disguised attempts to totally derail the country and take power by means of early elections or just plain old throwing sand in the wheels of any attempt to fundamentally change the situation. Two of those we can chalk down to Janez Janša‘s SDS, one to labour unions. You figure out who is responsible for what 🙂

Anyways, point being that since any attempt to kick-start things by broadening the spectrum of acceptable was doomed to failure be it from the opposition or the labour unions (plus a little waywardness within the coalition), the breaths of the acceptable became increasingly narrow. This narrowness of course is not something new, but rather became the “accepted norm” of the last thirty years (yes, Slovenes embraced capitalism before we embraced democracy). Soon everyone was expert at everything and those on the bandwagon looked down on those who did not or could not jump on it. And there were mighty few people who didn’t at least attempt the jump. With the power of hindsight it seems perfectly logical that Maribor archdiocese did what it did and that the whole thing went straight to hell but the scope of damage is staggering nevertheless. The total amount of so called “tycoon” credit lines extended to various Slovene companies reportedly amounted to 2 billion euro. Increased by another 800 million, this means that the Roman Catholic Church in Slovenia is responsible for almost 35% percent of all bad debt in this country.

Granted, the Church had realised long ago, even before the dawn of capitalism that money and property mean power. This, after all was also the declared goal of Maribor archdiocese: to promote, evolve and expand the teachings (and with them the influence) of the Roman Catholic Church. But this time it wasn’t just that people who are in the business of faith switched to the business of making (or, rather, losing) money. What we have here is a situation where men of faith put their faith in money. This goes beyond pure attitude one has towards the Church, be it on an ideological or purely personal level. This is probably the final proof that capitalism as we had known it until the fall of 2008 indeed had no real alternative and that in many respects still doesn’t have one, since any alternative which oversteps the boundaries of a neoliberalistic discourse is automatically discarded and – vice versa – every alternative which does not overstep those boundaries is apparently self-destructive.

Generally admonishing the Catholic Church for their ultimate financial fail will get us nowhere, nor will it radically change the playing field. To those who generally are not favouring the Church this is only the latest proof of what was known all along. To the flock, this was probably a shock, but the relation of the faithful to the clergy is theirs to handle. However, rather than dancing on what is arguably soon to become the economic grave of Maribor archdiocese and possibly the entire Roman Catholic Church in Slovenia (it turns out that Ljubljana archdiocese was helping out as well) we should be worried sick. Because if an institution with two-thousand-years-worth of history and collective memory succumbs to the lures of casino capitalism, we can finally get some perspective on just how strong, how deep and how irrational this crisis is.

Two thousand years ago Jesus apparently freaked out and told them that his temple is a house of prayer not a den of thieves. But in this day and age it seems that Keyser Söze was right when he said that the greatest trick Devil ever pulled was convincing the world he didn’t exist. This way, in a world which seemed like financial heaven, you could invest 800 million euro and like *that* it was gone.