By now half of what was once known as the Free World knows about the sheer stupidity of Zoran Thaler MEP who was caught red-handed in the Cash-for-laws scandal. But in case you missed it or are too busy either running a revolution in Libya or keeping Fukushima Dai Chi from complete meltdown, here’s the gist of it 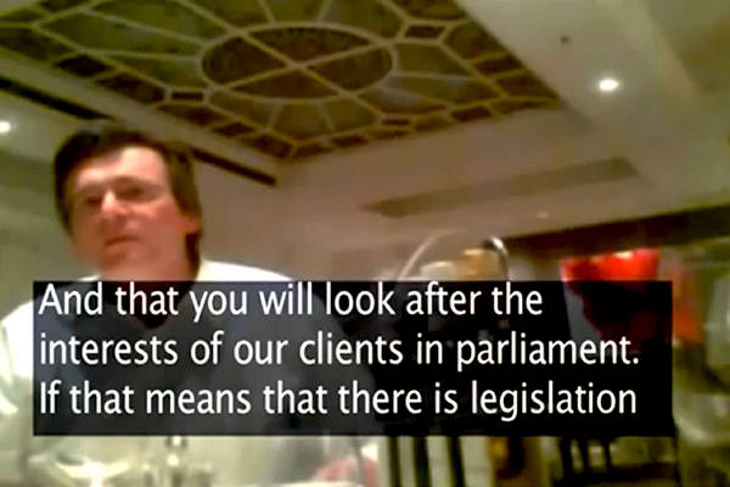 Sunday Times ran a sting operation codenamed Cash For Laws aimed at fishing out corrupt MEPs who would take considerable amounts of common European currency in exchange for filing legislation on behalf of various interest groups (in this case a fictitious London-based Russian banker). After kicking a few rocks around, they found one under which four MEPs were hiding: Pablo Zalba Bidegain of Spain, Ernts Strasser of Austria, Adrian Severin or Romania and Zoran Thaler of Slovenia. The mechanics of this were painfully simple. British journos posing as lobbyists would sit down with each of our Fantastic Four and feed them a story about this Russian client of theirs who would fork out 100 k€ to be split among the four of them were they to take part in an “advisory group” to the said Russian banker. Having covertly recorded the conversation it all made for a few memorable pwned moments.

Revelation of Thaler’s mischief naturally prompted a deluge of moral panic, outrage and general hypocrisy. But the fact that an MEP was looking for ways to make money on the side is hardly surprising. To be sure, it’s not kosher, is a direct violation of the representative-of-the-people and all that shit and leaves a really bad taste in one’s mouth, but it is not surprising. After all, the European Parliament is infested with lobbyists and the supra-national nature of the institution makes transparency all the harder to achieve (let us skirt the issue of depth-vs-breadth of the EU for now). Fact of the matter is that influence and legislative powers of MEPs are increasing while accountability has not exactly followed suit. This of course makes for a very fertile ground for both legitimate and ilegitimate, legal and illegal particular interests and influences being brought to bear by various pressure groups.

But what is surprising, is the incredible amount of stupidity, arrogance and casualness with which Thaler approached the issue. His demeanour in the incriminating video shows him as this incredibly suave guy oozing coolness, as if it was all in a day’s work. You know. Go to work, drop by the office, coffee at the parliamentary group’s HQ, debate the directive on fish droppings, file an amendment, vote, post-vote cocktails, have dinner with lobbyists, agree to represent special interest, go home and then do it all over again. This casualness bordered on arrogance when Thaler proposed he serve as a member of this “advisory group” for a year after which the “lobbyists” would decide whether he’s good enough for them. The now-former MEP for Slovenia was apparently so sure of himself and his actions that he decided to play the long game, possibly counting on some serious money down the road.

Which is probably the reason he acted stupid in the first place and agreed to be in this “advisory group” whose members were tricked into believing they will split some 100k€ among them. Provided the Sunday Times fished out only four rotten MEPs, this means a yearly fee of 25k€, whereas Thaler got a 30k€ severance pay upon tendering his resignation. So, you get 30k€ for doing the right thing and resigning and 25k€ for doing the wrong thing and perverting the legislative process (in addition to a 7k€ minimum pay-check every month). The only way this computes (apart from the possibility of the MEP in question being severely retarded) is if he hoped for some serious dough later on. And odds are he was doing just that. It transpired that apart from “doing a bit on the side”, Thaler (who, by the way, served as Slovenian foreign minister twice) tried to persuade the phantom Russian banker into a 1.5 million euro investment into a restaurant in Slovene Istria he holds a stake in. 1.5 mil, that’s a lot even for a corrupt MEP.

Facepalms don’t end there, however. Thaler’s initial reaction to the clustefuck of his own devising was that he knew all along that the whole thing was a scam and that he wanted to discover who was behind it. So, besides being an elected representative of the people, he styled him self as a double agent, a mole in the dark world of lobbyists and special interest, who wants to expose the bad guys inflicting unspeakable damage to institutions of the EU. One man against the armies of capital.

Yeah. And then the marmot wraps the chocolate. Were there a contest for the lamest excuse ever, Thaler would have won the second prize. He wouldn’t win because his excuse is that lame. I mean, wtf? It wasn’t even funny, his explanation. It wasn’t even cheesy, although some time ago Thaler was jokingly renamed from Zoran to Emen (Emen Thaler, get it?) But this they-were-out-to-get-me reflex is getting real old real fast. True, they were out to get him, but for a reason!

The whole thing is of course highly embarrassing for Slovenian PM Borut Pahor as well. Namely, although he is not a party member, Thaler ran for MEP on Pahor’s Social Democrats ticket and indeed headed the entire list. SD were quick to put a daylight between Thaler and themselves, but to little avail. The damage was done and all the party can do is to try to contain it as much as possible. This was done mostly by cutting Thaler loose immediately, not in the least by his fellow Social Democrats’ MEP Tanja Fajon who immediatelly called for a full and unfettered investigation into the corruption claims and called for any and all MEPs who are implicated to resign immediately.

In all honesty it has to be said that for the time being, the corruption seems to be spread evenly among the major parliamentary groups in the European Parliament. Or, at the very least, the Sunday Times knows how to ensure political neutrality even in corruption cases 🙂 But as far as Pahor’s Social Democrats are concerned, they have their work cut out for them. Just repeating that Thaler never was a party member will not be nearly enough. Their only break comes in the fact that even in Slovenia European Parliament is considered a distant and somehow less important institution.

But the extent of the fallout will depend on the behaviour of Thaler’s sucessor. The SD were close to another fuckup as next in line for Thaler’s seat was Pahor’s advisor Andrej Horvat who is also being investigated on corruption claims. Regardless of whether the charges are valid or not, sending him to Brussels would send a seriously wrong message. PM Pahor realised that soon enough and started twisting Horvat’s arm to take a pass on the Brussels seat. But Horvat was not easily convinced (either as a tactic or for real) and it was only yesterday that he finally said that he will not take Thaler’s stand and even that after Dušan Kumer and Miran Potrč, two reliable party heavyweights, twisted and apparently broke Horvat’s arm.

Thus Zoran Thaler (who, by the way sports appallingly bad English, especially for a guy who was this country’s foreign minister twice) will be succeeded by Mojca Kleva, a member of the upcoming generation of Social Democrats. How she will handle her new-and-unexpected political promotion remains to be seen. Although she has some experience in the corridors of Brussels bureaucracy and politcs, she runs the risk of being eaten alive by the sharks in the pool. But (full disclosure) pengovsky knows her personally (we’ve been colleagues at the university) and is convinced that she will put up a decent fight at the very least.