“I didn’t deserve this” said minister of development and European cohesion policy Marko Bandelli (SAB), butthurt as he announced his resignation on 13 November thus setting off a rocky ten-day period for the government of Marjan Šarec. And while the main event of the last few days were the 2018 local elections and some surprising results, the bad blood between various coalition members burst in the open almost as soon as the polls closed. 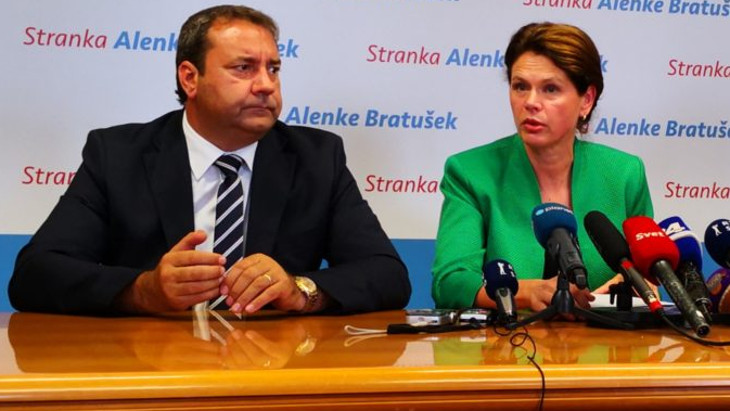 Had he remained in the parliament, Bandelli would probably have been able to wield considerable influence as one of the five heads of coalition parliamentary groups. Instead, he was lured into the executive branch and simply couldn’t resist the perks of the office. Not that a minister without portfolio gets a whole lot of perks. But the office does come with a driver and a nice car. With sirens! Oh, yes, the sirens.

Soon after he took office, Marko Bandelli was late to an official function. You know how it is. Ministers without portfolio in charge of EU cohesion funds are busy bees. So many papers to read and numbers to look over. Traffic was a bitch that day and Bandelli’s party boss slash minister of infrastructure Alenka Bratušek needs time to sort things out. And since an elementary school competition is not something a minister without portfolio in charge of EU cohesion funds is late to, Marko Bandelli did what any big boy with a big toy would do. He told the driver to turn on the siren and put the pedal to the metal

People started asking questions and when faced with media reports that he fooled around with official visual signalisation, the minister snapped and literally said that by law, he can do whatever he wants.

And then, just when we thought that he finally learned his lesson (as if cases involving Speaker Dejan Židan earlier in the year and minister of transport Patrick Vlačič back in 2009 weren’t enough), Bandelli hit it right out of park and sent an email.

Admittedly, the email had nothing to do with car sirens, but it wasn’t just any old email, either.

A letter surfaced in early November where Bandelli tried to flex some muscle in his hometown. Specifically, he told Erik Modic, a person in charge of EU funded projects in Komen municipality, that he shouldn’t run for mayor in local election and implied that if he did and got elected, Komen will have gotten overlooked when it came to EU funding.

Obviously, this generated a reasonably-sized shitstorm. In what can only be described as an abuse of office (or at least an attempt at one), Bandelli point-blank threatened a candidate for mayor he didn’t like. Not that these things don’t happen. But usually, people doing the threatening are careful enough not to put the threats in writing, lest they get leaked to the media.

However, in a case of galactic stupidity, Bandelli not only sent an email, he cc’d like a zillion people. Yeah, baby.

This would obviously have been enough for any self-respecting prime minister to send Bandelli packing. Turns out PM Marjan Šarec has a lot of self-respect.

Over the past decade, Muddy Hollows has become used to PMs mincing words, flip-flopping, backtracking and reneging on almost any given issue. Especially if it could rock the coalition or even bring down the government. Šarec, on the other hand, only needed a couple of days in between various legs of his jetting around the EU to assess the situation and come to the conclusion that either Badelli quits or he files a motion to the parliament for his dismissal. Point blank, no screwing around. He even wrote up a Facebook post accusing Bandelli of ineptitude . Which may or may not be true, but goes to show that PM Šarec does not shy from playing hardball.

Bandelli’s party boss Alenka Bratušek (SAB) was indignant. Not that she cares much about Bandelli, but being pushed around by a PM she provides crucial votes to is not exactly authority inducing. While it was Šarec who issued the ultimatum, it was up to SAB leadership to make Bandelli see the light and quit of his own volition (thus avoiding an ugly vote in the parliament). Alenka Bratušek was in fact forced to wield the hatched for Šarec and was mad about it. Now she wanted something in return.

Weirdly enough, she traded Bandelli in for a pension hike. Not another seat at the table or a plum job for a faithful party member or even more money for a pet project. No, she demanded a rise in pensions in the upcoming draft budget. Which was unorthodox, to say the least. But what might have been a pretty bold plan, backfired spectacularly.

SAB is in the middle of transformation into a single-issue party. And the issue they care about are senior citizens. This turf used to be the sole property of Karl Erjavec and his DeSUS. But Bratušek has been making huge inroads into that particular demographic. So much so in fact, that DeSUS saw its eleven parliamentary seats cut down by six seats and with SAB taking five of those. Karl Erjavec is not a happy camper right now.

His happiness levels decreased even further when Bratušek, reeling from the blow by Šarec, turned around and sucker-punched him with the move on pensions. As one does. Feathers started flying, DeSUS started making counter-demands and pretty soon Marko Bandelli, who on Monday will be relegated back to parliament as a mere MP, was but an afterthought.

Šarec, turning out to be one cold motherfucker, asked Bratušek and Erjavec to strike a deal on pensions, knowing full well no deal was forthcoming. In fact, he seems to have counted on both parties engaging in some petty one-upmanship about who cares more for the senior citizens. This prompted another social media intervention where he told Bratušek (who blasted Erjavec while he was abroad) to take it down a notch.

The end result, probably intended all along, was that both Bratušek and Erjavec came across as petty and childish. In the end, the pension hike was decided by the finance minister (an 18 million increase, spread over five brackets, if you’re interested). Bratušek didn’t respond well to the budget bruises and staged a dramatic late-night press conference on Wednesday, prompting speculation about SAB walking out of the coalition. This would of course trigger early parliamentary election and cost her an influential government position in addition to SAB’s five seats in the parliament. Bratušek obviously doesn’t want that. Thus, out of government-trashing speculation, a feeble threat to “think about not supporting the draft budget it if pensions are not raised” was born.

While Alenka Bratušek boxed herself into a corner, PM Marjan Šarec did the maths, realised once again that Bratušek has in fact to no place to go (he underscored that by basically saying that if his government is not to last then well, fuck it) and put the draft budget on the table without changes.

In a development that surprised a grand total of zero people, the entire complement of SAB ministers supported the draft. That sound you hear is Party of Alenka Bratušek deflating.

Oh, and what or Erik Modic, the guy Bandelli tried to threaten and bully into not running for mayor of Komen? He won in the first round, with more than 60 percent of the vote.