Friday last the National Assembly adopted an interim report by the parliamentary committee on TEŠ 6 coal power plant in Šoštanj. And it is a bit of a bombshell. Namely, the report deals with procurement procedures in the project which ballooned from an estimated EUR 600 million to almost 1.4 billion and states that the contract to build TEŠ 6 should have been offered via public tender and that active steps were taken to prevent that from happening, thus keeping the project non-transparent and a fertile ground for corruption. 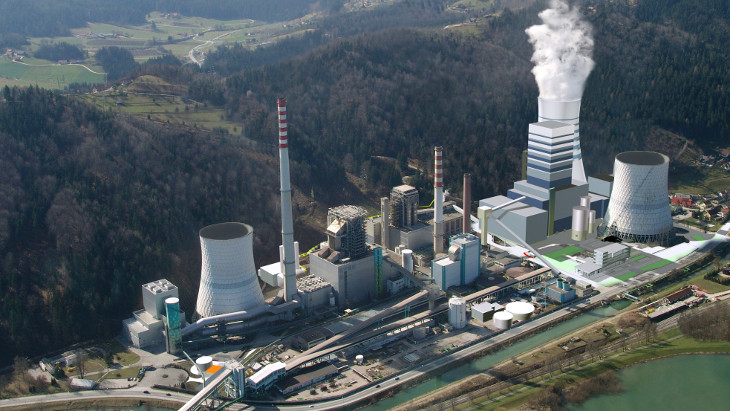 However, unlike most committee reports of the kind, this one goes further and actually names names. The principal enablers of the TEŠ 6 fiasco according to the report were: prime minister (now president) Borut Pahor, prime minister (now MP and leader of the largest opposition party) Janez Janša and ministers of finance and economy in both governments: the late Andrej Bajuk and Andrej Vizjak in Janša’s administration as well as Franci Križanič and Matej Lahovnik in Pahor’s government. The kicker? The parliament adopted the report with a nearly 2/3 majority (59 votes out of 90), with no-none voting against.

The 163-page report (and remember, this is just an interim report) doesn’t pull any punches. It painstakingly reconstructs the timeline of how various stages of the TEŠ 6 project were green-lighted and how national and EU legislation was actively avoided and/or misinterpreted to keep the financials of the deal out of the public’s eye.

While the report is dealing with political responsibility for the TEŠ 6 clusterfuck and is not directly connected to the criminal investigation of the scandal it is nevertheless important. It establishes beyond doubt that the project went off the rails due to wilful negligence and lack of oversight. To put it bluntly, PMs Janša and Pahor were actively looking the other way whilst their finance and economy ministers (Bajuk/Vizjak and Križanič/Lahovnik, respectively) were enabling the shenanigans and allowing them to continue even after it became apparent that the project is spiralling out of control. All of this by making sure public tender rules did not apply to the largest infrastructure project since the motorway construction programme in the 90s.

Or, to quote from the report: “On 15 February 2007 the Government has tasked the ministries of finance and of economy to seek an opinion of the European Commission on whether producers of electrical energy must conform to the Law on Public Tenders in Energy, Water, Transport and Postal Sector. Neither ministry proceeded to do so. Political responsibility for this is borne by then-minister of economy Andrej Vizjak and then-minister of finance Andrej Bajuk as well as their immediate superior, then-PM Janez Janša”

The report goes on to spread the blame on the Pahor administration: “The failure to act on the part of finance minister Franci Križanič is inexplicable as public procurement is within the purview of the ministry of finance. It is clear from his testimony that hat he failed to act and, furthermore, it is clear from his answer to Tadej Slapnik MP [in 2011] that he was aware of the problem. This makes him politically responsible for the matter. In addition, political responsibility is also shared by then-minister of economy Matej Lahovnik as the energy sector was within his portfolio. And the political responsibility for failing to act lies with their immediate superior, then-PM Borut Pahor, as well.”

And in conclusion: “Given all of the above, we can confirm that political influence enabled violation of EU Directive 2004/14”

Bottom line: Both SDS- and SD-led governments were doing everything the couldto keep the project moving, including ignoring their own previous decisions and violating national and EU legislation. All this regardless of the fact that the project was turning into an economic and financial nightmare.

This is about as damning as it gets without having a SWAT team knocking down your door in a pre-dawn raid.

A small side-note: even though the SD and the SDS were the principal actors here, it should be noted that finance minister Andrej Bajuk was a president of the NSI (the junior coalition party in the Janša administration) while Matej Lahovnik was a member of Zares during the Pahor administration. Reasons for their implication are prosaic at best. Even though he was nominally an equal partner, Andrej Bajuk was no match for Janša whom he came to view as a boss rather than a political fellow traveller. As a result, he got pushed around a lot. Matej Lahovnik, on the other hand, chose special interest over party as TEŠ 6 came with a promise of various spoils for his native region even as his party Zares opposed the project virtually from the outset.

A gift that keeps on giving

Most of this was already known or at least suspected via various news reports over the years as well as a couple of rather loud political dust-ups. But to have it black on white and confirmed by an unusually large parliamentary majority could be a game changer. “Could be”, because despite everything there seems to be little appetite (political or otherwise) for opening this particular can of worms any more than it already is. The parliament voted on this virtually under the radar and apart from the few obligatory write-ups, the media paid scant attention.

Upon closer scrutiny, however, a few gems can be found, especially when one compares voting results from the 2012 vote on extending a 400-million guarantee for the project that was by then known to have spiralled out of control and voting results from Friday’s vote on the report.

Granted, the composition of the parliament has changed drastically since then but 23 MPs have served in both parliaments and some of them are bound to face uncomfortable questions as elections approach. Especially the three MPs who voted both in support of extending the guarantee and in support of the report. These are Franc Jurša and Marjana Kotnik Poropat of DeSUS and Janko Veber of SD (he has quit the parliamentary group since).

But apart from a ha-ha moment, this only shows how the three are not really on top of their game (this goes especially for Veber, whose detachment from reality has for a while been considerable). Others who backed the guarantee in 2012 were smart enough to abstain from voting on the report, just so they don’t end up with a foot in their mouth. Or, in the case of the SDS, to not piss off the party boss whom the report implicates and who abstained as well. Although Janša long ago made a habit of abstaining from every important vote and a number of the party’s MPs didn’t support the guarantee in 2012. At any rate, TEŠ 6 is a gift that keeps on giving. It is no wonder that some people in both SDS and SD orbits are already pitching the “no-one cares about this any more” spin. It remains to be seen just how many people are buying what they’re selling, though.

The question remains where do we go from here. The parliamentary committee is scheduled to complete its findings by the end of January 2018 with the parliament voting on the final report a month later. And while the politics is the art of the possible, it is hard to imagine that the final product would not get parliamentary approval. Especially after top-tier politicians have already been found negligent. On the other hand, if the committee comes up with another bombshell report, there might be enough critical mass accumulated thate people responsible just might see further pressure being exerted and questions being asked.

Since both SD and SDS are angling for a good outcome in the upcoming election, this issue could further complicate things for them. TEŠ 6 was marketed both as a source of clean coal energy, a source of extra electricity to be exported at a profit and a provider of 3500 jobs in the area. None of this is happening. Slovenia still imports energy, the environmentally unsound parts of TEŠ power plant are still operational, the company is laying people off and the taxpayers are footing the cost via increased electrical utility bills. Right now it sucks being the political party responsible for a derailed gravy train worth 1.5 billion.

The one person who appears to have avoided the (political) fallout is president Pahor. He was just re-elected to a second five-year term in a campaign that barely touched on this affair. But while impeachment is not an option in this case (no matter how some people might call for it), it will be interesting to see whether he will try to ignore the issue until it goes away or try to execute one of his trademark I’m-only-human shticks.