Following a surge in influx of refugees which apparently stretched Slovenian personnel and housing resources to their limits, the government of Miro Cerar came up with amendments to Defence Act granting the Slovenian army policing powers and rushed them through the parliament in a rarely used emergency legislative procedure. The move, backed by both the coalition and most of the opposition is aimed to provide relief to the overstretched police and Civil defence force. But in reality it opens a Pandora’s box of the military spilling over into the civilian sphere. 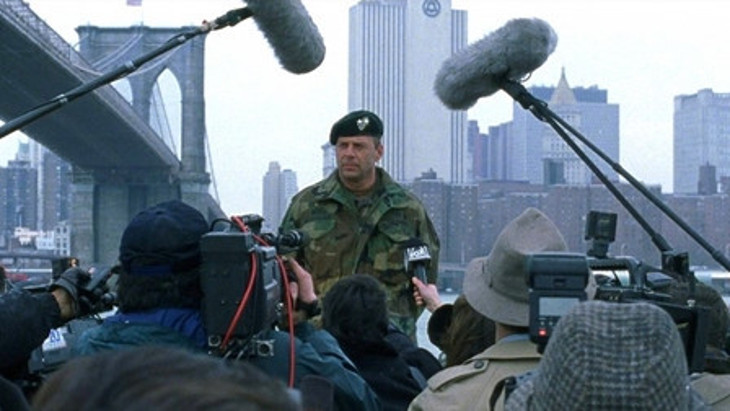 “The army will perform its duty.” Bruce Willis/William Deveraux in The Siege (source)

Admittedly, the numbers Slovenian authorities were dealing with are staggering in terms of the country’s size and its resources. More than 20.000 refugees came to the Slovenian border via the “West Balkan route” through Croatia in the last couple of days. Quite a substantial number of them, as per Slovenian government, without any notification from their Croatian counterparts who reportedly transported the refugees somewhere in the vicinity of theborder rather than to the actual border crossings and then cut them loose, leaving them to make their way across the river, fields and marshes into Slovenia.

And since Slovenia, trying to be European to a fault, insists on an orderly processing and transfer of refugees from Croatia through its several refugee centres onwards to Austria, things got tricky at the Slovenia/Croatia border, prompting the government in Ljubljana to employ the army as a policing force.

Which is a big fucking mistake.

The problem is, of course, many-fold. First, the mere fact that with this, the firewall between the civilian and the military sphere is being, albeit slightly and temporarily, torn down. Giving the army powers over the civilian population is a big no-no. Unless a state of emergency was declared and last time pengovsky checked, that wasn’t the case. Although some people act as if it were. And this is the problem number two.

A lot of what we were seeing these past few days were knee-jerk reactions to events that were and are apparently getting the better of people at the top of the food chain whose primary role is to keep things strategically in check. As if deploying the military was the only alternative to using police forces.

There’s the old adage that if a hammer is all you know how to use, everything looks like a nail. But this is not a case of trigger-happy politicos jumping the gun (literally) and launching a scenario not unlike in The Siege. No, a more proper parallel would be that of a first-time plane passengers on a very bumpy ride, already reaching for their life jackets while the flight crew is still serving drinks.

A number of those alternatives came to light as the parliament was debating the amendments to the Law on Defence. These include aid by the European frontier agency Frontex as well as bilateral help from other EU states’ police forces, most notably Austria and Germany. These options are now being considered and reportedly about to be enacted.

Problemo numero tres is the actual scope of powers granted to the military. While members of the Slovenian army apparently have some crowd control training, there is serious concern as to whether Slovenian soldiers have the (legal) knowledge and experience to execute these powers with necessary restraint and respect for human rights. Don’t get me wrong, I’m not saying that Slovenian Army are prone to human rights violations. What I’m saying is that the army – any army – was not designed with this in mind. Simple as that. And by the time enough military units are trained in the nuances of policing civilians and equipped to do that effectively, this crisis will have long passed.

Which brings us to the fourth and the biggest problem. This, too, shall pass. And after it does, we’ll be left with army units with a shitload of equipment they won’t need anymore and training that does not correspond to their basic mission. A waste of resources, if I ever saw one. But not only that. The most worrisome leftover will be the legislation itself.

Because if you think that the provision granting policing powers to the army is going to go away after this is over, you’re sorely mistaken. It is here to stay, for ever and ever. Just like increased political meddling with the public television or the fiscal rule.

And even if the government plans to repeal the provision after the crisis abates, someone should tell them they will fail to secure the necessary two-thirds majority. Because the right-wing parties which supported the provision practically without dissent (customary political bickering, gloating and we-told-you-so’s not withstanding) and who find Victor Orban a rather appealing character, were long clamouring for something like this. And now they got it, they’re not going to let go of it that easily.

Luckily, yesterday cooler heads prevailed and the bar for approving special powers was raised to a two-thirds rather than just a simple majority as originally proposed by the government. Also, the amended law provides a sunset clause for these powers which expire after three months if not revoked sooner. They can, however, be extended, too, pending a re-vote. Meaning that this is not really a strong safeguard against abuse.

Fear of abuse was present in the subtext of the presentation by the Chief of the General Staff, Maj. Gen. Andrej Osterman, when he addressed the parliament yesterday. Namely, among other things, Osterman said Slovenian army neither wants nor has asked for policing powers, but will perform the duty as instructed.

It was Bruce Willis in the role of General William Deveraux in The Siege who said that the army is a broad sword, not a scalpel.

And yet, here we are. What could possibly go wrong?