Remember when Delo journalist Anuška Delić found herself at the wrong side of a criminal investigation pertaining to her alleged use of classified material when she wrote about the connection between Janez Janša‘s SDS, the Slovenian Army and the local Neo-Nazi Blood&Honour organisation? Well, things have taken a turn for the bizarre. 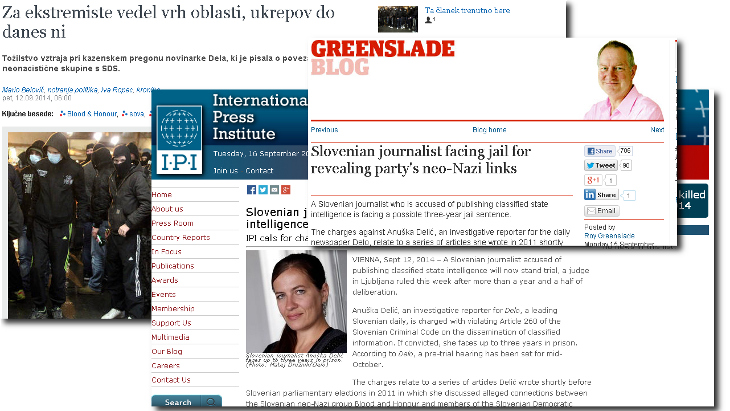 Namely, contrary to common sense and basic decency, the prosecution did in fact press the case forward and… well, turns out SOVA (the secret service) freaked out and had Delić investigated because her articles were spot on. SOVA at the time did in fact detect a link between the Neo-Nazi element and the SDS (the party had presumably cleaned up its act since) and put together a classified report. This is where the plot thickens.

Delić claims she never broke the law, i.e. never used classified material when she was preparing her article. Whether that’s true or just a line of defence remains to be seen. Or, rather, not seen, hoping still that cooler heads will prevail and let the matter die a quiet death in the mills of judicial bureaucracy. In fact, the prosecution, too, apparently feels they lack a smoking gun since they’ve asked the court to authorise a check on Delić’s phone records. Ironically, had the case not moved forward, Delić would never have known the state wanted to see her phone call log. Apparently she only learned of that when she was delivered the details of the indictment against her. Further to that, according to as-yet-unverified info, SOVA also had prosecution indict former head of the secret service Sebastian Selan. Whether or not Selan is being investigated as a possible source of the leak is still a matter of some speculation, but it does suggest that someone wasn’t really thinking when they set about closing the leak.

Namely, dragging your former boss, the guy who knows all your secrets to court is, well, stupid. What are you going to do? Charge him with high treason? Becasue abuse of office doesn’t sound all that threatening when dealing with a former chief spook. Asking for permission to pry into a reporter’s phone log is doubly stupid, because, a) we’ve all seen All The President’s men and important info is never relayed over the phone and b) it makes the secret service look like it is chasing its own tail. Not that SOVA doesn’t occasionally indulge in this as it is, but still.

Anyhoo, the thing that makes this more serious a matter than just yet another amateur night in the Slovenian spook business is the fact that SOVA disseminated the report among top-level officials responsible for this country’s security: chief of police Janko Goršek, justice minister Aleš Zalar (who at the time served as acting interior minister), defence minister Ljubica Jelušič, PM Borut Pahor and President Danilo Türk.

Let’s take a look at this one more time, in slow motion. The very top of the security pyramid in this country was notified by the secret service that there’s an active connection between Neo-Nazis and a specific political party, extending all the way into the Slovenian Army. And no-one moved a muscle.

Well, not exactly. According to a Delo story from a couple of days ago, President Türk did, according to his statement to the said paper, alert both PM Pahor and defence minister Jelušič to the report and urged them to act upon it. Which is about as much as he could do, since his authority over the armed forces is minimal during peace-time.

And that was it. Jelušič wrote at the time that discharging soldiers due to their alleged sympathies with the extremists which they profess in their own free time would really not be kosher. She even famously added at the time that “we do not even know what sort of extremists we’re dealing with here, whether they’re illegal and whether they indulged in extremist activities in their free time or not”.

Well, it appears Jelušič, despite her writing to the contrary knew full well what she was dealing with. The fact that SOVA is going after Delić for publishing it says so. The only question is why she chose to ignore it. One can only speculate, but the fact that Slovenia was in the middle of 2011 election campaign at the time possibly played a part. Which points the finger at Jelušič’s then-boss both in the government and in the party, Borut Pahor, who has since been elected president of the republic. That his office is staying mute, speaks volumes.

The latest developments in the case were, admittedly, picked up the Guardian as well as International Press Institute. But still, at the end of the day, what we have here is a security apparatus clamping down on a journo who did her job when no-one else would, as the spooks were leaking at the seams and the people trusted to run the country made every effort to look the other way when faced with an inconvenient truth.

Maybe, just maybe, it is better the case made it this far. Now at least we know how fucked-up the matter really was. But it would be unfair to ask of Anuška Delić to see it that way. After all, it is her back up against the wall.

VOLUNTARY DISCLAIMER: Anuška Delić was in no way, shape or form contacted for the purposes of this blogpost. Whatever conjecture there is in it, it is entirely mine and made based on publicly available information