The government of Alenka Bratušek suffered a major blow Friday with the Constitutional Court shooting down the recently adopted real-estate tax and leaving a gaping hole in this year’s budget, just south of 200 million. In a unanimous 9-0 vote the judges unreservedly struck down the law on real-estate tax passed together with 2014 budget late ast year as well as a crucial piece of legislation allowing for mass-valuation of real estate passed in 2006 under Janša administration 1.0. 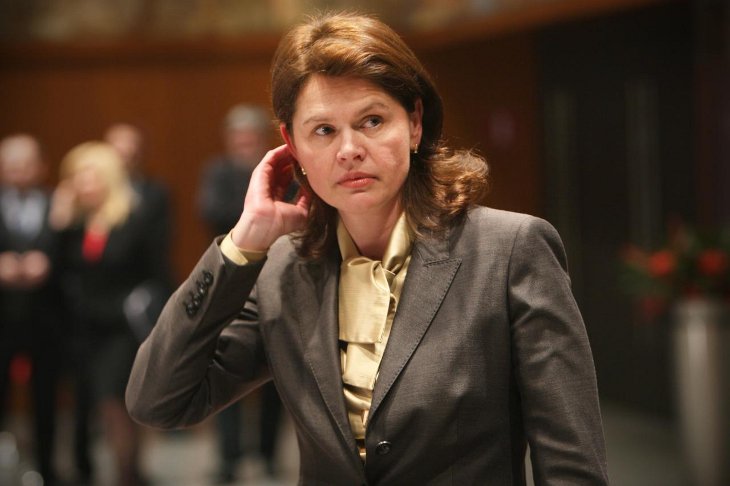 AB is probably a bit worried these days (source)

The ruling is a resounding slap-in-the-face for Bratušek administration and has repercussion across the board. Remarkably, few of those repercussions are directly political. A number of factor come into play here, making the end result much less clear than the pundits will have you think.

Namely, immediately after the ruling was announced, the dominant political and media line was that “the constitutional court passed a no-confidence vote against the government” with the implication being that the PM should resign sooner rather than later. Even more, the trouncing of – admittedly – a key piece of legislation caused a furore of tweets, soundbites and articles about how AB lost her legitimacy as head of the government, especially since she tied her own confidence vote to passing of the real-estate tax. All of which is, of course, a load of bullshit and at the same time a nice example of pack-hunting.

Namely, the idea that a negative ruling should result in a government dismissal is flawed both from a legal as well as political sciences perspectives. Under current legal system the only scenario where the constitutional court has *any* say in the political fate of the executive branch is in an impeachment procedure and even that requires a 2/3 majority in the parliament beforehand.

Which brings us to the political sciences angle. The concept of checks and balances is based on the legislative, executive and legal branch being independent of each other whilst equipping each to curb excesses of another. In this case, legal instruments lie with (and were exercised by) the constitutional court, while the instruments of political control lie solely with the parliament.

Additionally, while the measure was a part of the 2014 Budget, to which AB tied her vote of confidence, she did not do so specifically for the real-estate tax. And even if she did, the ruling would have in no way implied the vote of confidence is now somehow overturned. Therefore, if any political fallout were to follow government’s routing in the courtroom it would require a new and unequivocal act by the parliament

Alternatively, the PM could, technically, resign of her own accord. And this is what the opposition and the pundits want her to do, knowing there is no new majority in the parliament to replace her. Now, if Slovenia were a country with a high level of political culture, that might even be a valid expectation. Taken solely by itself, the real-estate tax is the so-called Third Rail of Slovenian politics and governments much stronger that the Bratušek administration got burnt on the issue. But there is a world of difference between attempts of the Pahor or (partly) Janša administrations to enact a policy decision and a dash to close the budget by any means possible.

And in a country where constitutional court rulings go ignored for years on end, where the constitutional court itself reneges on its own precedent time and again and where and where politicos refuse to resign even after being sentenced in a court of law (appeal pending), expecting a PM whom few people deem capable of doing her job to adhere to the highest political standard is hypocritical at best.

So, what happens next? The immediate task of Bratušek and finance minister Uroš Čufer is to close the leak in the budget. Čufer proposed a VAT hike but hit a slightly unexpected roadblock in the form of Gregor Virant and his DL. The interior minister is facing an interpelation (no-confidence vote) courtesy of the SDS. But Virant was in a lot of hot water lately and his political standing is starting to follow his party’s ratings, i.e. going south. Which is probably why he’s upping the ante, most likely trying to trade budget measures for votes in his favour on Friday.

The fact that EU elections are only six weeks away does not help the issue, the same for rumours about Zoran Janković trying to re-take the party. EU elections will soon be followed by local elections in Autumn and parliamentary elections in 2015 if not sooner. Point being that there will be precious little room to pass any meaningful measures as more time passes.

Third rail or not, it might very well be that the real-estate tax might soon prove to be the least of Bratušek’s problems.