Finance daily ran a story yesterday about PM Janez Janša is set to kick interior minister Vinko Gorenak and justice minister Senko Pličanič out of the government come Autumn. While the government communication office denied the rumours (PM Janša remains mute on the issue) the story might actually have legs given its proximity to last week’s scare about the vote of confidence. 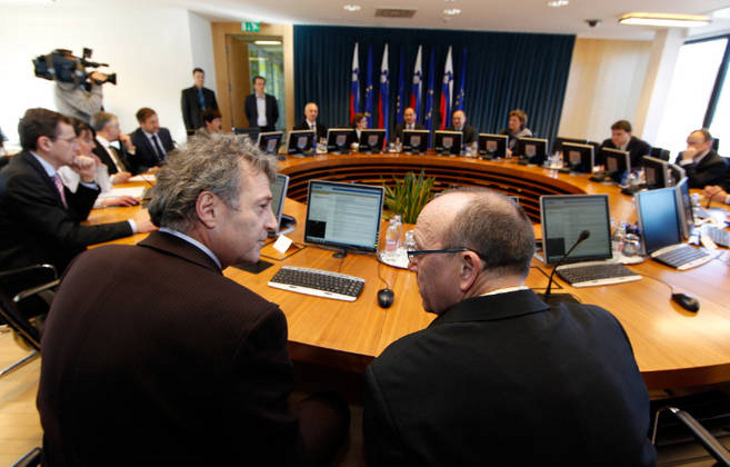 At any rate, a government reshuffle is quite embarrassing this early in the term of the current administration, but is also far from problematic. In fact, it has become something of a tradition for a Janša administration. Early on during his 2004-2008 stint at the top job Janša had to find a replacement for Jože P. Damijan, who resigned his post as development minister after only three months in office, reportedly due to falling out with then-finance minister Andrej Bajuk over (non)selling of NLB. Slightly off-topic: in hindsight it appears Damijan had a point back then and lost no time rubbing it in the face of his former boss (Google translate here)

It should also be said that neither Pličanič nor Gorenak (offically) have any knowledge of PM’s alleged bad blood, with Gorenak writing up a rather heavy rebuttal (again, google translation) but, interestingly, avoiding the finer points of Finance story. In fact, a lot of it is actually a classic non-denial.

But the gist of the story is somewhere else entirely. A week or so ago PM Janša appeared on Vroči Stol (Hot Seat) programme hosted by Vladimir “Vudu” Vodušek. What was basically a farcical re-run of a similar event four years ago would probably be forgotten soonest , had Vudu (now owner of a financially embattled Info TV cable TV station) not been arrested the very next morning on charges of extortion and blackmail, unofficially of a CEO of a hardware company. It was all highly embarrassing for the prime minister, who – according to the Finance story – went apeshit over not being told that Vudu was a target of a criminal investigation. And this is where things get interesting.

The only thing is that the PM is probably the last person on earth who can be told of an ongoing criminal investigation. In a democratic state politics stays out of police work. It takes the widest berth possible. Which is why Janša’s (again: alleged but not denied) reaction is highly symptomatic of how this administration sees this country: as a top-to-bottom controlled organism with no horizontally or vertically independent sub-systems and with the head knowing everything and making all the important calls. There’s a word for that and it ain’t democracy.

Minister Gorenak maintains that he never spoke to Janša about the investigation. Which is fine, even though one can understand the sentence as if he himself did have prior knowledge of the investigation (which he shouldn’t have, as the police is under his portfolio but not direct control). Which would – bizarre as it sounds – mean that interior minister Vinko Gorenak did something right for a change and is looking down the wrong end of a gun-barrel for it. Go figure. Not that he would be sorely missed, but still…

And as for minister Pličanič, he too is apparently getting the short shrift for doing too much rather than too little. According to media reports the past six months have seen (some sort of) results solely in the areas of financial austerity and public administration, the former being the portfolio of finance minister Janez Šušteršič while the latter is the domain of minister Senko Pličanič (both, incidentally, of Gregor Virant‘s Citizens’ List)

What Pličanič apparently didn’t understand was that he was meant to do as little as possible save perhaps a token effort here and there. He really should have gotten the message when the State Prosecution was detached from his portfolio (justice) and joined with internal affairs (ran by Gorenak). But as things stand, he seems to be poised to play the sad role of collateral damage.

One thought on “Getting Fired For Actually Doing Something?”