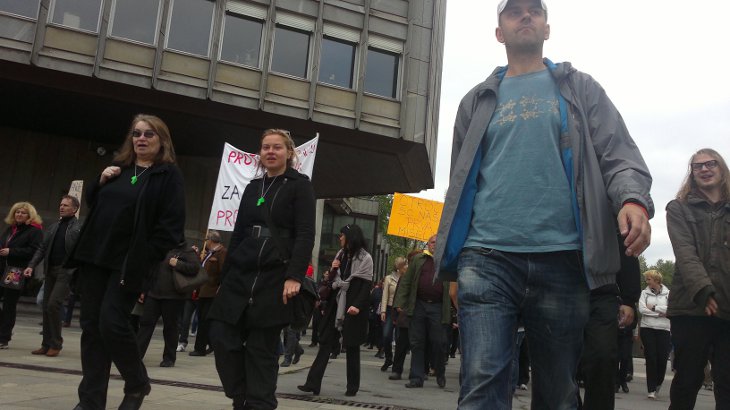 Those of you who follow The Firm™ on Facebook (hint hint!) probably already saw this, but nevertheless: Some 100,000 public sector employees went on strike today. Schools, kindergartens, libraries and some faculties were shut, policemen, firemen and customs officials were down to skeleton crews and performed only basic duties. Ditto for nurses and several other public services. As every branch of every union had to vote on whether to jon the strike, there were exceptions: journos for state TV and radio did not join the strike, altough they supported it. Some faculties voted against the strike, some didn’t even have a union branch organised. But after all was said and done, this was still the largest strike in the history of this country.

Most of the people were on strike at their place of work. Some, however, joined protests in cities all around the country, the largest of them being held in Ljubljana, where it is estimated that some ten thousand people poured in front of the governmetn and the parliament building. Pengovsky was there for your viewing pleasure.

More on austerity measures planned by the government of Janez Janša and what they lead to here and here, gallery below.