The campaign for December 4 parliamentary elections officially began on Friday and everyone more or less hit the ground running. Polls were again being published by the truckload and they further strengthen the notion that rarely in the history of democratic Slovenia has so much been at stake. In fact, the polls combined with some early below-the-belt punches create the notion that what we will be seeing in the next 28 days will not be just yet another election campaign, but rather a deathmatch.

Let’s do a bit of number-crunching first: Citizens’ List of Gregor Virant and SDS of Janez Janša are interchanging at the top spot, while Pozitivna Slovenija of Zoran Janković is sticking to spot number three. DeSUS of Karl Erjavec and Social Democrats of PM Borut Pahor are hovering around the 4% threshold, while everyone else, including Zares, LDS and SNS are (still) below water, while only SLS occasionally makes ot above the surface. The irony is that no-one can really be happy with the situation. Parties of Gregor Golobič, Katarina Kresal, Radovan Žerjav, Ljudmila Novak and Zmago Jelinčič (Zares, LDS, SLS, NSi and SNS respectively) are fighting for survival and although they all proclaim they’ve no doubt about making it into the parliament, some will face the reality in a manner akin to hitting a brick wall.

Arguably, the guy who stands to lose most is Zmago Jelinčič. Leader of the nationalists used to be the resident joker, the political free-loader who won the disgruntled vote and occasionally threw in an actual policy issue or two, is in deep trouble as his voters are among the most fickle ones. They’ll vote for whomever they can relate to best, and in this respect Jelinčič is apparently losing ground to the other funny man of Slovene political arena: Karl Erjavec of DeSUS, who is no stranger to political stuntmanship, only he takes himself much more seriously. Not that moron-factor is any lower for that but still. Sure enough, Erjavec is on the brink as well, but in terms of survivability his odds are much better than Jelinčič’s.

Below the fold, however, LDS and Zares seem to be getting the short end of the stick. Both are increasingly being written of dead meat although it needs to be said that the lower the percentage, the more unreliable polls become (as Davor explained in Slovene in this comment). So it could be – and both Katarina Kresal and Gregor Golobič are counting on this – that their support is in fact much stronger than polls suggest. Only time will tell, but the downside of these polls is that they are being used as points of reference by TV stations when picking candidates and parties who get to have a seat at the debates (more on this in the coming days). Ditto for NSi and only slightly less so for SLS.

Of those who seem poised to make it, SDS and SD have the most stable result. Unless disaster strikes, Janša’s party looks poised to win at least around 18 to 20 percent, whereas Pahor’s party seems to have hit rock-bottom and will probably level out at about 8 to 10 percent. On the other hand, parties of Zoran Janković and Gregor Virant have their ratings all over the map and they need a good election result if they want to call the shots in forming the government.

So, as you can see, a lot of people stand to either gain or lose quite a lot. In fact, if one is to expand the field of political impact beyond the immediate scope of election result, we see that there is not a political leader in Slovenia who doesn’t have to worry about political survival. Gergor Golobič, Katarina Kresal, Zmago Jelinčič, Ljudmila Novak and Radovan Žerjav are struggling to make it to the parliament. Karl Erjavec is close, above the fold, but always five minutes away from an in-party mutiny. Borut Pahor is trying to put on a brave face at the prospect of a disaster of epic proportions which would probably lead to his swift removal from the party helm. Janez Janša is being prosecuted in the Patria case. Gregor Virant is running on fluff and neither he nor his party would ever recover if their spell of mesmerizing media and voters was broken. And finally, Zoran Janković is risking it all by actually running for MP in a safe precinct in Ljubljana, which means that if his party doesn’t get enough votes he might end up stuck in parliament, losing his mayorship (there are slim chances of him getting out of this mess, but more on that some other time). 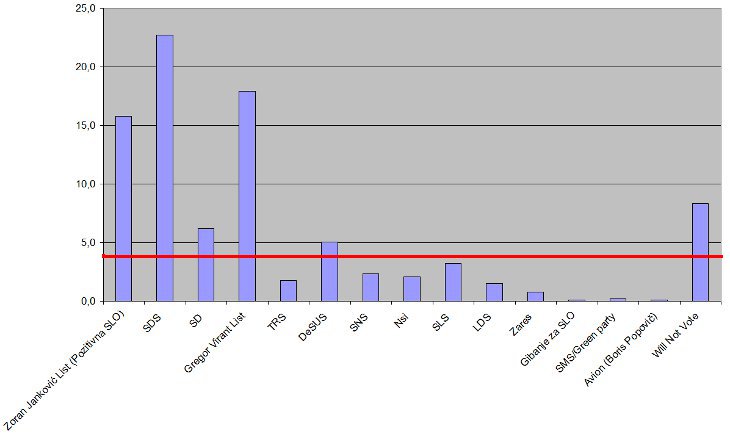 In other words, what we will be seeing for the next 20+ days will be a multi-way political death-match and – to use a quote from Top Gun – there are no points for second place. Well, there are points for anything above 4%, but you get the point. Carnage will be #epic.

N.B.: Data is compiled from different polls with different sets of questions and different samples, so it is not directly comparable from a scientific point of view. Data still available as .xls file for download.

While Slovenia is gearing up for the official launch of the election campaign this Friday, shit is brewing in Greece. OK, that’s hardly news, but pengovsky was all like 😯 when he saw tweets about the Greek Army General Staff being axed overnight by the government of George Papandreou.

Not a pretty picture (source)

A classic of the 20th century, replacing the top brass of a country’s army translated into “deep shit”. When JFK was being cornered into Bay of Pigs part deux during the Cuban missile crisis, he apparently at one point mulled replacing the entire Joint Chiefs of Staff, but then chose not to do it, because it would mean that a) he doesn’t control the army or, worse, b) there was an attempted coup. Either way, a message he didn’t want to send to the Soviet Union.

Years ago, Croatian president Stipe Mesić by ways of presidential decree retired several top generals of the Croatian army in one big swoop. It soon emerged that the generals involved were openly opposing the president (their commander in chief) and took it upon themselves to “protect the truth of the Homeland War [the 1992-95 war in Croatia]”.

And of course, there’s Turkey, where every so often in the 20th century the Army, seeing itself as the protector of the secular (and semi-autocratic) state, would take the power, ostensibly to keep down the islamists. It was only last year that the government held 40 generals over rumours of an attempted coup.

Turkey and Croatia (both aspiring to become EU members) aside, it should be noted that Greece, Spain and Portugal were, until couple of decades ago, full-fledged military dicatorships and their entry into the EU was one of the ways to keep the then-fledling democracies – well – democratic. One can hardly imagine a general sitting in Brussels, confabulating with the likes of the British Prime Minister, Italian Presidente del Consiglio dei Ministri or the German Bundeskanzler… Oh, wait… shit…

Anyways, we’re not there yet. But axing top military brass in the middle of what is without a doubt the deepest political, economic and social crisis Europe is facing since the 1930s is bad juju. The way pengovsky sees it, there are three options:

2) The Prime Minister, who is barely holding on to power, will do anything to prevent elections which would undoubtedly remove him from power, including declare martial law (there’s circumstantial evidence to support that theory as well)

3) This is nothing more than a scare-tactic, reminding Greeks of the days of being ruled by military junta and hoping they’d rather support yet another austerity plan than let everything fall to pieces and let some trigger-happy moron come to power. There’s circumstantial evidence to support that theory as well.

None of the above is agreeable. Options One and Two are especially scary, because they show that Greece and indeed much of Europe is on the doorstep of re-visiting its not-so-distant and very dark past. Option three is only marginally better, in the sense that we’re not on the brink yet. But no one seems to know how to turn back.

The moment military is in the game one way or another in any European country, general alarms should ring throughout the continent. The thing is, however, most modern-day EU leaders have a hearing problem. Time to stock up on toilet paper and spam, I guess…