President Danilo Türk saw it fit yesterday to share his thoughts on the current Slovenian clusterfuck which was only deepened following Sunday’s ass whooping the government of Borut Pahor got by losing the triple referendum. But instead of clearing things up The Prez only stirred the pot some more. In fact, what the president had done (again) was dangerously close to exceeding his authority. 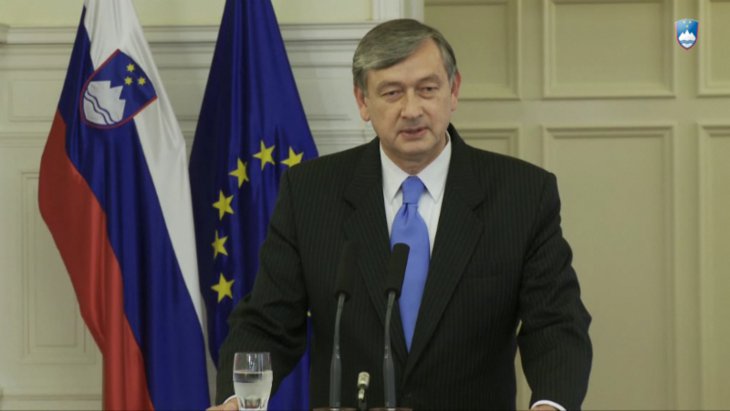 The Prez being overy presidential (source)

In a nutshell, president Türk repeated his statement of some weeks ago that had he the authority, he would have dissolved the parliament and called early elections. He also said that the government lost a large portion of its credibility and that a general re-shuffle of the cabinet would be in order, including the prime minister himself (“there should be no taboos when re-shuffle is debated“). Additionally, he conceded that political parties themselves are a part of the problem (“just a change of the ruling party is not a solution“) and was promptly blasted by Janez Janša‘s SDS for it.

Testing the outer envelope of constitution

The thing is that the president’s powers are strictly limited vis-a-vis the parliament and the government. He can call elections when constitutional conditions are met, he can nominate a candidate for Prime Minister, appoint ambassadors and is the nominal Commander in chief of the army. And that’s about it. OK, he does have a wider scope of powers in wartime, but that’s another matter. As things stand now, the president can neither order a cabinet re-shuffle nor can he call early elections. Even more, the president makes a show of offering himself as a mediator in what is essentially a coalition feud but at the same time saying that the parties must solve this amongst themselves. Saying what he’d like to do (but can’t) only complicates the situation further and one could argue that he is pushing the envelope on what the president is allowed and/or expected to do. So, if The Prez deserved a slap on the wrist the last time he day-dreamed about an increased scope of powers, this time around he should be told off quite sternly. The fact that he more or less openly sided with one of Zares‘ ideas about how to amend the voting system only reiterates this notion. Don’t get me wrong, the idea itself is rather good (more influence of votes over who actually gets elected to parliament) but I don’t think it is becoming of a president to simply co-opt a certain party’s idea, no matter how good.

But Türk’s forays into the uncharted presidential territory pale in comparison to the acid reaction of SDS to his statement. The largest opposition party went on the offensive and labeled Türk as “part of the problem” and again repeated the lie about Türk’s alleged involvement in the Velikovec bombing, where SDS forged documents to “prove” the claim. So on one hand we have a president who would repeatedly test the outer limits of his powers and on the other hand we have a rabid opposition which repeats a blatant lie about a president without as much as blinking an eye. Overly confident president versus a nit-wit party. Yay! :/

It must be said, however, that Türk’s tete-a-tete with journos came awkwardly close to today’s session of Zares’ leadership where Gregor Golobič and top party brass issued a sort of ultimatum to PM Pahor and senior coalition party, the Social Democrats. The junior coalition party said that it wants a cabinet re-shuffle (including the PM) within a fortnight otherwise it will quit the coalition. The Liberal Democrats of Katarina Kresal went even further and outright demanded a new government, although they did not specify a time-frame. And when you consider the President’s position, that there can be no taboos in a cabinet re-shuffle, these things start sounding very much familiar.

Now, for all intents and purposes, all three options amount to the same thing. Resignation of Borut Pahor as Prime Minister. If the PM quits, the whole government goes with him. This is basically what Gregor Golobič proposed weeks ago, when he suggested that all thee party leaders quit their posts and return to the parliament where the existing coalition would appoint a new PM with a new government. Back then neither Pahor nor Kresal enthused. Well, the latter seems to have had a change of heart, which leaves Pahor somewhat alone in an increasingly hostile political environment. Today, the Social Democrats already gave a “semi-official” reaction in the form of education minister Igor Lukšič (formerly a close Pahor aide) blasted the idea as undemocratic and indecent.

So, unless something dramatic happens, Prime Minister Borut Pahor might very well continue on this course, minus yet another coalition party (the LDS seems to have decided to stay a coalition member regardless) and run an increasingly minority government, counting on Zares to support him regardless, because they’ve no place else to go, politically speaking. But more on that in the coming days, so stay tuned! 🙂