The aftershocks of the defeat in the referendum on menial work are reverberating throughout the cesspool that is Slovene political environment. Not only did the result embolden the labour unions and their brothers in arms who are now gearing up to bring down the pension reform as well. But the political fallout is also considerable. Obviously, the opposition rushed to take advantage of the situation despite the fact that for once it had preciously little to do with this referendum (as it will have with the next one). This of course did not stop it from demanding the government step down, specifically, senior SDS MP Zvonko Černač using a football analogy saying that the government was shown a red card. 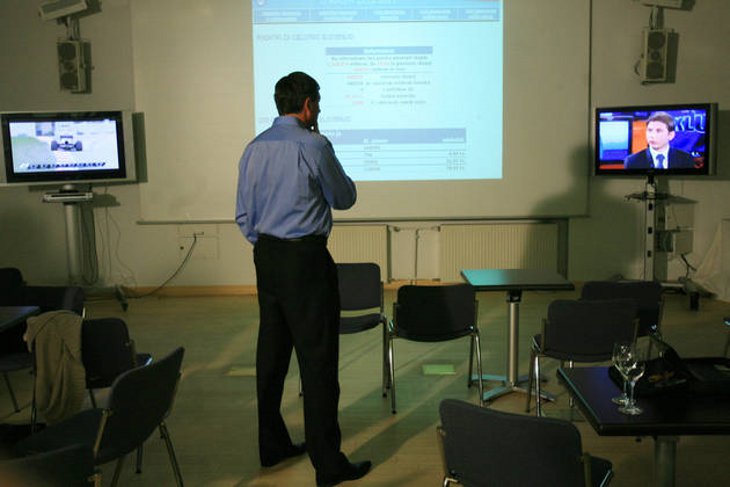 However, if anyone really seized the moment it was the freshly-acquitted leader of DeSUS Karl Erjavec. DeSUS opposed the pension reform from the start, one of the sticking being system of pensions adjustment for inflation. Erjavec’s loyalty to this coalition government was questioned even back then, most vocally by Zares of Gregor Golobič and LDS of Katarina Kresal. But on Monday, Erjavec stuck it up to PM Borut Pahor, calling for the PM to call a confidence vote prior to the pension reform referendum which is to take place on 5 June.

The Quartet became The Trio

Despite the fact that Erjavec often invoked the opt-out clause in this coalition (not that one exists, but it was understood that some leeway in loyalty to coalition is acceptable) but then always fell back in line, this particular move can not be interpreted as yet another stunt by Teflon Karl. Not only did he call on the PM to go check if he still enjoys the support of the parliament, he also “disowned” minister of Labour Ivan Svetlik who, although not a party member, was considered to be a DeSUS ministe. When constructing the cabinet, Pahor wanted Svetlik in particular and Erjavec wanted for DeSUS that portfolio in particular. Thus Erjavec politically “adopted” Svetlik and everbody went home happy. Until now.

With Svetlik “officially” not being a part of DeSUS’ quota anymore, Erjavec says that a) PM should dismiss the incumbent minister and b) he gets to pick the next one. And although the party leadership today voted against DeSUS exiting the coalition, this is exactly what in effect happened. For all intents and purposes, DeSUS (at least for as long as Erjavec is at its helm) is no longer a member of the ruling coalition. The Quartet is once again The Trio

The perfect storm of political screw-ups and disinformaton that ultimately led to Sunday defeat was well analysed by drfilomena in this post (Slovene only). The way it looks now this was not a one-off event. Well, truth be told, this government also lost the referendum on the new law on RTV Slovenia, but it does not end there. Next up is the referendum on the law against black market labour, then we have the referendum on pension reform and then quite possibly, referendum on law on access to classified material, which was in part caused by the SDS fiasco on Velikovec bombing documents and is bound to reignite it again.

The highpoint, the climax, if you will, will of course be the pension reform. This will probably be where Pahor’s government will make the last stand to implement what remained of the reform legislation, thus at least patching things up for the time being and then seeing what, if anything, can be done. Given the rhetoric and against the backdrop of Sunday’s result it seems conceivable that the government will lose the referendum on preventing black market labour. And even though anticipated, the defeat will not be any less hurtful. If nothing else, it will give additional impetus to what pengovsky calls an “unholy alliance” of unions, student organisations and the opposition and on the other hand making the majority of the population even more tired of constant referendums, thus ensuring that only die-hard voters (mostly those against reforms) will cast their vote.

In that respect, one can sympathise with PM Pahor who yesterday, during a visit to UK Prime Minister David Cameron said that “I’m going through hell with my ministers.“. A most aptly chosen sentence given the situation and the PM, who often likes to quote the greatest of British Prime Ministers, Winston Churchill, might want to remember that the old bastard (and I mean that in the most loving way possible) said that “if you’re going through hell, keep going”.

Bad PR and caring for the common man

And some hell this government is in. Much of it is its own doing, mostly through its disastrous PR. Most of the scandals which rocked the coalition hard spiralled out of control because the initial response was wrong, lacking, or both. The same goes for achievements of the government. Sure, it easy to be smart about it, but in pengovsky’s mind the fact that PM Pahor and his team basically solved the border dispute with Croatia (or at least took it of the agenda) should be written in the history books with golden letters. Instead, everybody treats it as if it is a minor event, not even worthy of page seventeen of Monday’s paper.

On the other hand, we have a leader of the opposition who is under criminal investigation, but still somehow manages to dictate the debate on variety of issues and those he doesn’t hijack, others do it for him. Were the government PR doing its job, the situation would probably not be half as bad. The good doctor wrote about it in her post, while Centrifuzija expanded on it considerably. This hijackings of debate are done under a common umbrella of “caring for the common man”. The reality of course is that no-one gives a shit about the mythical “common man” because he/she is just a statistical approximation. What is actually happening is every interest group trying to forward its agenda on account of everyone else, not taking no for an answer and threatening or even resorting to civil disobedience, no matter how irrational or out of proportion their interests are in relation to the world around them. The same goes for the opposition which at the moment operates on a very simple premise: so much worse for the government, so much better for us.

It is no wonder then, that populism and obvious impossibilities are being used daily. The last in line being a statement by Janez Janša who said that – watch this – “pension reform may not even be necessary, if only Slovenia cut public spending radically“. So, keeping the pension fund solvent by reducing public expenditure? WTF? But it sure sounds nice.

Point being that the opposition, once it regains power (and even Pahor is now talking about Janša as the next probable PM) will have to implement those very same reforms it is derailing today only that they will probably be even more austere or just plain brutal. But hey, if it helps them grab the power, the country can probably take a little more abuse.

Or can it? If anyone had done a sober analysis of the Sunday vote, alarm bells would be ringing wildly. The turnout was 34% with 80% of those voting “no”. This means that labour unions and the student organisation, two of the strongest civil society groups together with the opposition generated a puny 27% overall vote against the government. Let me repeat that: a little more than a quarter of all voters could be bothered enough to vote against the government which is scoring historic lows (only 20 percent or so) in public opinion polls. It seems as if everybody is so busy trying to “get the government” that they can not see that they have a huge legitimacy problem themselves.

The Prime Minister, indeed the entire government, would do well to regain control of the public debate(s). Given that the atmosphere is poisonous-bordering-on-radioactive there is little wiggle-room left. Special interest groups know neither fear nor mercy promoting their agendas and the opposition is enjoying the view of the government drowning in the quick-sand of political impossibilities. What PM Pahor should do, is resign immediately. But not, as some have suggested to make way for a new leader on the left, but to do what no PM has done before – actually force early elections.

Pengovsky often wrote on how early elections are practically impossible in Slovenia. You almost can not call them, especially since the parliament will most likely not dissolve itself. But that does not mean it is impossible, provided the discipline in the coalition is strong enough. Technically, the scenario would go something like this: Pahor resigns in beginning of May. This is followed by a 30-day period of trying to find a new PM, while the existing government assumes a care-taker role (which it will assume anyway if the reforms are nixed on referendums). The coalition refuses to support anyone for the post of PM three times over at which point the President dissolves the parliament and calls elections which must be held within the next two months. All in all, taking the summer vacations into account, we could have next elections by autumn this year.

By this Borut Pahor and his coalition would force the opposition’s hand. Janez Janša announced that he and his party intend to win absolute majority of votes in the next elections and that they are also writing a new constitution from scratch, no doubt rearranging the balance of power to suit their needs. But to complete the process, they will need time as they are nowhere near finished. Indeed, the latest polls even noted a continuing downward popularity trend for Janša and his party which, ironically, is also calling for early elections. But for Janša this is only another way to keep the pressure on Pahor, because early elections would catch him utterly unprepared and without a conceivable political platform other than “complete annihilation of anything Pahor’s government does”.

So, in order to have a chance at political survival, PM Pahor should resign ASAP. This does not necessarily mean that he will again be elected PM, but if he does nothing, he almost certainly will not be. Unless, of course, his main rival is found guilty in the Patria case. Either way, it’s a gamble of galactic proportions.

9 thoughts on “On Second Thought, Maybe PM Pahor *Should* Resign”