After Janez Janša and his Slovene Democratic Party (SDS) were caught indulging in creative photocopying of archive material trying to implicate President Danilo Türk, the shit hit the fan yesterday, when Delo newspaper revisited and expanded the story it initially broke on Saturday. Delo’s exercise was relatively simple. It entered the state archives and compared the file SDS published against actual records. 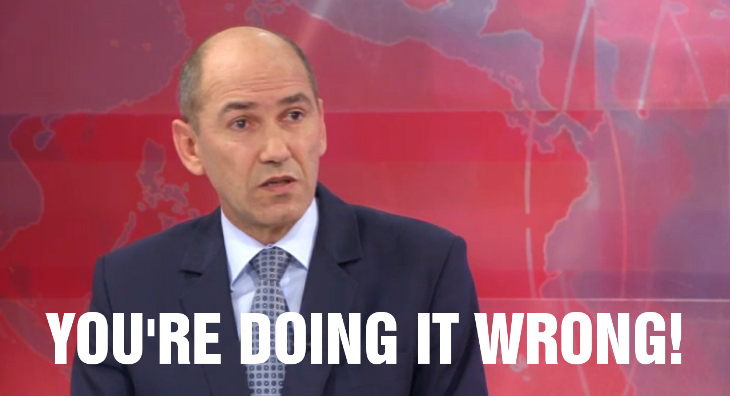 In what was a hugely embarrasing day for SDS and its leader it was sort of funny to see how the usually vocal SDS MPs and other party members were conspicuously quiet, running to their hidey-holes and avoiding media attention, even distancing themselves from the actions of the party (and by extension, their leader). The evidence against SDS was irrefutable, especially after the state archives published the complete set of documents completely confirming Delo story. However, just about that time SDS leader Janez Janša posted a lengthy reply on his party’s website.

And by lengthy I mean what-the-fuck-long. Ten pages of, well, the shit. It’s got everything: communism, Depala vas, arms deals, persecution, revolution, political intrigue, power struggle, secret services, media manipulation, arbitration agreement with Croatia and personal vendetta. Everything you ever wanted to know about Janša’s universe but were unable to comprehend. I really hope SDS will translate the text and post it on their new-and-improved English website. Either that, or I just might translate it myself. However, the text and subsequent Janša’s media appearances send a message other than the leader of the largest opposition party will have us read.

Bottom is that Janša took responsibility for the whole thing, basically admitting that he was fully aware of what was going on. He denied any wrongdoing and maintained that a) there was no forgery, not even “misinterpretation” and b) the president is lying when saying that he was not directly informed about Velikovec bombing. This means that whatever the fallout of this spectacular scew-up, it will land directly in Janša’s lap. By yesterday late afternoon this seems to have dawned on Janša, who predictably survived his first interview on Kanal A‘s trashy news programme, where the host was no match for the illustrious SDS leader. Things got worse later in the evening, when Janša appeared on state television and started changing the story and its highlights.

Thus the latest version of the truth behind “Archivegate” (moniker courtesy of the good doctor) as interpreted creatively by Janez Janša is that Danilo Türk was given information other than media reports about the background to Velikovec bombing some time after the attack. Conclusion: as of yesterday (according to Janša) being “directly informed” means getting any information (other than media reports) at any date after a particular event, even though the information in question is nothing but a non-problematic diplomatic cable.

Janša also went on to add that the whole thing only reiterates the need for the secret archives to be declassified. Regardless of the fact that the documents published were found in already declassified batch of documents. In other words, one has nothing to do with the other, except in Janša’s universe. That particular universe took a big dent yesterday. So big in fact, that Janša saw it fit to spread the blame, going out of his way to point out that it was “assistants to SDS parliamentary group” who sifted through the archives and came up with the documents. You know, just in case he starts to really feel the heat and he needs scape goats. The party faithful will come more than handy.

But still, why would Janša go after Türk in the first place? Pengovsky partly answered that question on Sunday. This was a ploy that back-fired on a massive scale and the collateral damage to SDS in general and Janša in particular will be considerable. It is very tempting to simply say that SDS leader has issues. In fact, the whole thing was most likely premeditated (after all, it was hinted at during impeachment attempt against Türk).

It is worth noting that 2012 will be the year of both parliamentary and presidential election and that a lot is up for grabs. Janša was making noises about a strategy called “50+”, probably meaning that he will attempt to secure absolute majority in the parliament. Given the (un)popularity of the government of Borut Pahor he might even have a chance (albeit a very slim one). But one area where he and his party are seriously lacking, is a credible presidential candidate. Other than again persuading Prosecutor General Barbara Brezigar to have another go at it (she lost to Janez Drnovšek in 2002 presidential campaign), there just isn’t a person with enough clout to run for that particular office. Especially with Danilo Türk probably running for re-election

Unless, of course, the incumbent president’s reputation is tarnished beyond repair.

Objectively speaking, the presidential race is a battle Janša can afford to lose. The president wields no executive authority and Janša (should he become the next prime minister) could easily govern with Türk in office. However, Türk was already in office during last year of Janša’s 2004-2008 government and made life rather difficult for the right-wing. Also, before Türk, the late Janez Drnovšek (he died on this day three years ago) also has plenty of not-so-nice things to say about Janša (calling him the Prince of Darkness), especially when Janša’s government went head-to-head against Drnovšek and his foreign policy exploits.

In short. Janša is only comfortable with total governing, controlling most if not all branches of power. And this is probably the gist of it. Archivegate is in fact an attempt to clear the field of a credible adversary ahead of what Janša hopes will be regaining the control of this country. Janša concluded his 10-page-essay hoping “that this will be done by elections and not by street protests”.