Since this is the hot topic in Slovenia at the moment, as well as since pengovsky was slacking lately, it is only fair to give you the low-down on the whole shebang and brings you up do speed on the issue. In (at least) two-part series 🙂 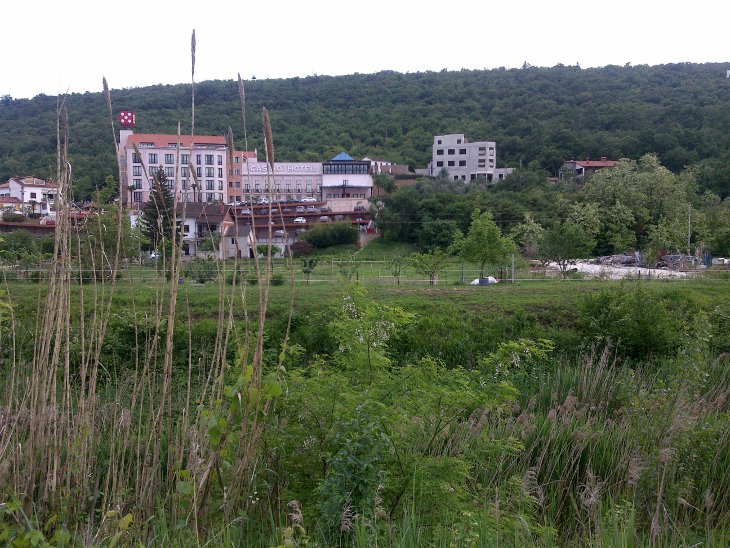 Croatia, as seen from Slovenia. The 200 metres in between constitute the disputed area.


The story so far


As you know, Slovenian Prime Minister Borut Pahor and his Croatian counterpart Jadranka Kosor signed the co-called Stockholm agreement, which ended months of Slovenian blockade of Croatian EU accession negotiations. The agreement itself sent sparks flying on both sides of the border, with Croatian and Slovenian opposition accusing their respective governments of selling out national interests to the other side.


After some serious political wrestling south of the border, Croatian parliament ratified the agreement with a required two-thirds majority upon which the ball was in Slovenian court and things started slowing down. First, the government of Borut Pahor, weakened by a series of more or less serious scandals and – combined with mounting burden of the economic crisis – becoming increasingly unpopular and painted as incompetent asked the Constitutional to rule on the constitutionality of the issue. The Court took its time, but in the end reached an overwhelming 8-1 decision saying that the agreement itself does not violate the constitution, as it sets forth a mechanism to decide on the maritime (and other disputed areas) of the border.


As the Arbitrage Agreement is “only” a bilateral agreement between two countries and not yet the actual decision on the border, Slovenian parliament ratified it with an ordinary majority. Naturally, this was done over vocal protest of the opposition, which claimed that a 2/3 majority is needed, given the sensitivity of the issue. But parliamentary Rules and Procedures are clear on the issue and a vote on the agreement was split down the coalition/opposition line.


Following the ratification, the government decided to call a referendum on the issue. Truth be told, the coalition at first mulled a preliminary (and non-binding) referendum which would have to take place prior to the vote in the parliament, but following a strong support by the Constitutional Court it backed down on its word, realizing that a consecutive (and legally binding) referendum would be called regardless. If not by the government, then by the opposition. After all it only needs 30 MP votes to demand a referendum. In the end 87 out of 90 MPs voted for holding a referendum on the issue. Well, actually there are 89 MPs at the moment, as Srečko Prijatelj of SNS is still in detention pending criminal charges 😀


And so the referendum is to be held on Sunday 6 June. Should it pass, the parliament would only have to find that the law on ratification of the Agreement was supported and that the agreement is ratified.


But the result of the referendum is far from being a foregone conclusion. Initial polls showed a marked support in favour of the agreement, which has been dropping slowly even since. This more or less corresponded with occurrence of another phenomenon: a huge increase in density of English language specialists per square metre in this country.


It all boiled down to one word: junction. Article 3, item b of the agreement says that one of the tasks of the ad-hoc arbitrage court is to decide junction of Slovene terrotirial waters to high seas. As the court will use an English version of the agreement as its roadmap, it should be next to irrelevant as to how exactly “junction” translates into either Slovenian or Croatian. Of course, it isn’t irrelevant and soon everybody and his brother was in the business of explaining the meaning of the word “junction” to everyone else, who naturally had their own competing theories.


But the bottom line is this: while the government and its supporters claim that “junction” means physical contact of Slovene territorial waters with the high sears, the opposition sees it differently and points out that there is no mention of “physical” contact and interprets the text as pre-empting any form of a direct contact with the high seas and limits Slovenia to a right of passage only.


In Slovenia opposition to the arbitrage agreement ranges from legal interpretations of the text, which invariably claim that the ad-hoc court will rule in favour of Croatia, i.e. will draw the border down the middle of the Bay of Piran, effectively limiting Slovenia to its insignificant pond of Adriatic Sea. But to prevent things to get too boring and scholarly, accusations of high treason, betrayal of national interests and collaboration with the occupator are being thrown in the supporters’ general direction.


The general claim – as demonstrated by SDS leader and former PM Janez Janša the other day – goes along the lines of Slovenia being constantly pushed around by foreign powers. After 1918, the argument goes, Slovenia lost parts of Carynthia. After 1945 we lost Trieste. After 1954, when the question of Free Trieste Territory was being settled, we lost Savudrija and parts of Istria. And now, we are willingly giving up what little we have left.


Exactly. Not only is the above sentiment historically incorrect, it also creates an unhealthy aura of Slovenia having territorial claims against its neighbours. And while one is always tempted to poke Italians with cries of “Trst je naš!” (Trieste is ours!), especially during football matches, it is beyond imagimation that Slovenia would try to “right the historical wrongs”, either by making demands against Austria and Italy, or by taking it out on Croatia.


You see, Slovenia never had Austrian Carynthia. It also never had Trieste and it never had Savudrija, much less entire Northern Istria. What it did have, was police jurisdiction over entire Bay of Piran, as well as spatial planning jurisdiction over four hamlets located on the disputed area around The River Dragonja estuary, at the mouth of the Bay of Piran. So, invoking 19th century rhetoric serves little purpose but to spread hate speech, historical fallacies not unlike those which fuelled the Balkan wars.


And since both countries draw continuity from the former federal state, they are technically both entitled to their claims, especially since there were no maritime borders between the republics of former Yugoslavia. But the geography of the Bay of Piran is such that using conventional approaches one of the parties in the dispute inevitably loses. Thus, an unorthodox solution is needed.


To find out what exactly was on the table, how we got here, why Arbitrage Agreement is better than many would have you believe and why others will rather gnaw their arm off then see it become a reality, tune in tomorrow 😀

10 thoughts on “The Definitive Guide to the Arbitrage Agreement Between Slovenia and Croatia, pt. 1”