It seems that the general public was not the only one who stood amazed at the breathtaking speed and easy-going manner in which DeSUS president Karel Erjavec picked Henrik Gjerkeš as a candidate to replace the outgoing minister for local self-government and regional policy Zlata Ploštajner. It transpired that not everyone within the party was happy neither with the candidate himself, much less with the procedure (or lack thereof) in which Gjerkeš was appointed candidate. 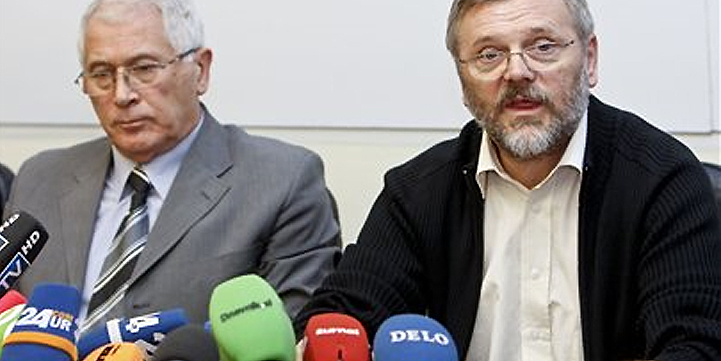 Party president Karel Erjavec is known for making up his mind and then “democratically notifying” party council which then formally approves Erjavec’s decisions. The thing is, that apparently there’s little debate beforehand, which degrades party institutions to rubberstamp level. Truth be said, the situation is probably the same in most Slovenian parties albeit in varying degrees of intensity. But in a party as small as DeSUS (small in terms of inner-party organisation and issues it pursues) cracks quickly become visible, voices of discord are heard more clearly and solo political escapades have graver consequences.

This time around Erjavec’s solo escapade blew the lid off the top of the heads of two DeSUS MPs, Vili Rezman and leader of DeSUS MPs Franc Žnidaršič. The former apparently said that he does not feel Gjerkeš’s nomination had enough debate within the party, hence he does not feel obliged to support the candidate in tommorow’s vote. Party president Karel Erjavec consequently went apeshit and basically told Rezman to “love it or leave it”. This was too much for Žnidaršič, who feels for some time that MPs don’t get enough say in party matters and said that if Rezman is forced to leave the party group, he will follow suit.

As things stand now, DeSUS has seven MPs, making it the third largest coalition party. Were Rezman and Erjavec really to leave, Erjavec’s standing in the coalition would be severely damaged. Even worse, it is entirely possible that Rezman would defect over to Janez Janša‘s Slovene Democratic Party (SDS), and this would suddenly become a major headache for Prime Minister Borut Pahor, who can not afford to start bleeding votes. Not in times like this, with government’s popularity going south, with unpopular legislation still to come and with Janša stirring the pot and screaming for a “technical government” (with him at its helm, of course). Pahor and his Social Democrats can only thank whatever god they believe in that only days ago Franc Pukšič MP switched over from SDS to Radovan Žerjav’s Slovene People’s Party (SLS), which would mean that Rezman’s switcheroo would bring SDS’ MP count back to 29 and still keep it one short of Social Democrat’s 30. Were the two parties on an equal footing in number of MPs all hell would probably break loose, with Janša demanding an overhaul of parliamentary committee memberships, since Pahor’s SD would cease to be the single strongest party in the parliament.

But there are probably simple enough reasons for all the commotion within DeSUS. Local (municipal) elections are about eleven months away and Vili Rezman is mayor of Ruše municipality near Maribor (another case of one person being a mayor and an MP at the same time). I’m not sure whether he has a lot to show for his work within the municipality, but since that part of Štajerska region gravitates to the right side of the political spectrum it is entirely possible that Rezman is trying to secure his re-election by distancing himself from the government and the party. Mind you, he is not really a party member, he merely ran on DeSUS ticket. But being a DeSUS MP does give him a bit of say over party matters.

Cue Franc Žnidaršič, leader of DeSUS MPs. As noted above, he is frustrated with MPs being shoved around by Erjavec. During the post-election convention Žnidaršič’s frustration was big enough to run against Erjavec for party president. He lost spectacularly and then claimed to have done it merely to draw attention to the dwindling levels of democracy within the party. But he never denied his ambitions to take over the party at some point. In all honesty, he probably has the knowledge and skill, but he definitely lacks media flair.

So, odds are that Karel “Teflon” Erjavec will once again skate clean. And a good thing for him, too. The Patria Affair is starting to boil again and pretty soon he will probably be faced with problems which will make keeping the party together look like a walk in the park.

4 thoughts on “Love It Or Leave It”