As of last Thursday Boško Šrot is no longer CEO of Laško Brewery. Officially, he tendered his resignation in order to alleviate the pressure Laško was under lately and calm things down He was succeeded by Dušan Zorko, CEO of Ljubljana-based Union Brewery, which Laško took over in the so-called brewery war of 2002 when it clashed with (and won) Belgian Interbrew (now ABInBev). In the days following the resignation it became clear that the move was only a beginning of a fast-paced chess game which is still going on and where Šrot is now apparently on the defensive. However, he is by no means on the run. 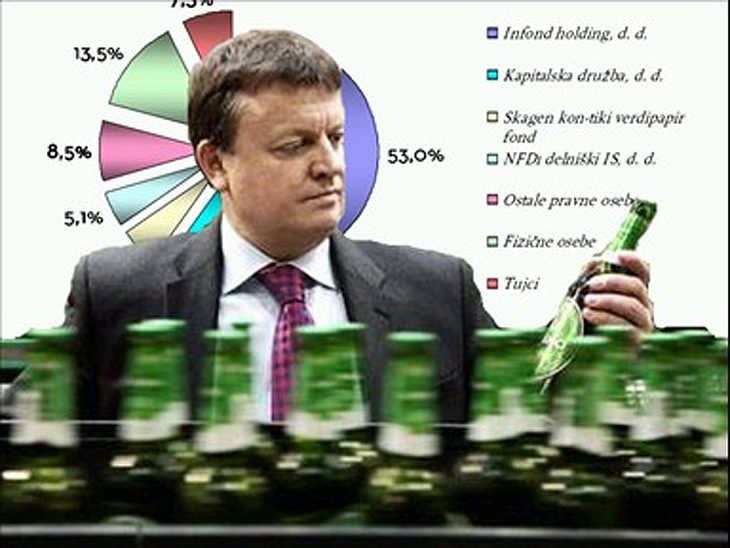 Namely: Even though he resigned as CEO of Laško Brewery (or “was resigned”, which is local-speak for being forced to resign), Boško Šrot remains the majority shareholder of the company via his company Atka Prima, which owns 78 percent of straw company Kolonel, which owns 71 percent of investment company Infond Holding, which in turn owns 55 percent of Laško Brewery. And the brewery itself owns entire Slovenian drinks industry. So, by resigning, possibly forced to do so by the banks which bankrolled his juggling of shares and now want their money back, Šrot is actually better off. He remains the single largest owner of the brewery, while the burden of managing a heavily indebted, but (this must be said) still very much solvent Laško Brewery now falls on Dušan Zorko.

And this is the biggest difference between Laško and Istrabenz, or – if you prefer – between Boško Šrot and Igor Bavčar. The latter ran Istrabenz into the ground by trying to finance his own MBO by draining the company financially, while the former has a much bigger war chest and several layers of defence between himself and the company he ultimately controls. And he just added another layer, which some people interpreted as a panic move, but it might just prove to be a very shrewd one. Yesterday Delo daily reported that Atka Prima (the company directly owned by Šrot) sold Kolonel (the straw company) to an Italian company Iniziative Generali 96 owned by one Pierpaolo Cerani and based in Trieste, just across the border with Italy.

The fact that the supposed sale was first reported by Delo newspaper, which is owned by Laško, naturally raised eyebrows and that alone was a clear indication that something was fishy about it. Things increasingly smelled like a fish market on a hot Saturday afternoon after a bit of googling showed that Signore Cerani was involved in the co called Savoy Scandal which rocked Bulgaria three years ago (not that Bulglaria isn’t a muddy pond with all kinds of fish in it, but this one did involve its PM and former king). And today Dnevnik daily reports that Šrot sold only 30 percent of Kolonel, keeping the other 70 firmly in his hands. And the only one saying anything about it is Signore Cerani, who indeed confirmed the deal, but apparently did so in the vaguest terms possible.

At the moment this looks as a dummy sale, another case of “parking shares” with a friendly company, an activity which Šrot is very skilled in. Obviously the Italian is getting something out of it, but most likely nothing more than a commission – possibly the said 30 percent of Kolonel, while Šrot gets some much needed hard cash to placate the banks which have already requisitioned Infond Holding’s share of Mercator, because the company (the immediate owner of Laško) ran out of cash to pay back the loan. And while banks cash in on Šrot’s collaterals, he is regrouping, apparently prepared to fight it out and protect his ownership of Laško Brewery to the last. In this he will apparently get a helping hand from the new CEO of the brewery, who said upon taking office that his goal cleaning up Laško financially, even by selling assets if needs be. And some of those assets can fetch a lot of dough. Like Delo newspaper for example. Or even some of the less lucrative parts of his drinks empire.

Upon hearing of Šrot’s resignation a lot of people thought this was the beginning of his demise. Not even close. If before last Thursday he was responsible for running the entire empire (Laško Brewery with its numerous assets as well as every company in a complicated chain of ownership) he can now focus solely on ownership, while Dušan Zorko (the new CEO) takes care of keeping the company solvent and continuing paying debts to finance Šrot’s buyout of the brewery. The Italian Job is here merely as a diversion to help Boško Šrot regroup and stave off future attacks by the Competition Protection Office, which is slowly building the case against Šrot and Laško.

EDIT@1500 hrs: According to a statement by Laško, Pierpaolo Cerani confirmed, via his lawyer, that he did indeed buy a majority stake in Kolonel. If this information is correct, this means that for the time being he controls the entire Slovenian drinks industry. However, this does not mean that he is not providing “parking” services.

4 thoughts on “The Italian Job”