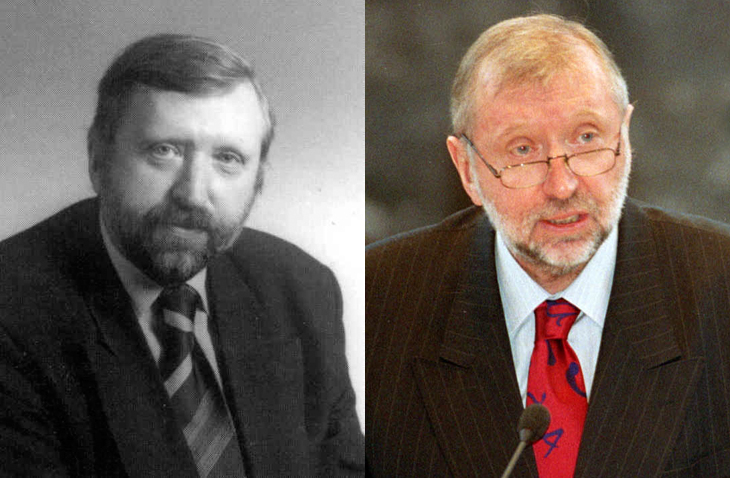 The initial shock of PM Borut Pahor keeping Dimitrij Rupel as a senior government official is over and we can take a look at it once more.The consesus seems to be that Pahor flipped. Gone bananas. Down the toliet. Whacko. Went David Blane. Lost it. Went nuts. Tripped the light fantastic. Slammed his head with a golden brick with a lemon-peel wrapped around it. You name it.

The backlash was instant. All over the newspapers letters to the editor are full of people spitting venom at Pahor, people threatning to quit the party, lamenting their vote for Social Democrats, with emotions ranging from disbelief to sheer anger.So the question on everyone’s mind is: Why? Why flush down entire (and I mean entire) political capital Pahor has so painstainkingly accumulated over the years. Why going from a hero to a zero in an instant, when he lives for and is addicted to ratings. It just doesn’t make sense.

Or does it.If one looks around, one will see that there is little to no reaction to Pahor’s naming Rupel for special envoy for foreign relations. Nobody is even seriously asking, what the fuck a special enovoy for foreign relations is. Does he handle the Middle East crisis? Hope not. We’d have World War III on our hands within a fortnight. Does he negotiate with Croatia? If so, wouldn’t it be better if he were called Special envoy for Croatia? Besides, Rupel has been negotiating witht Croatia for his entire carreer and no good came out of it. Does he do special ops? OK, I’m pushing it… Point being that nothing is known about his job description. And yet, noone is saying a thing about, although eighty percent (according to some polls) of people are going apeshit. PM Pahor only says that he realises that he’s not very popular right now. Gregor Golobič of Zares is trying to play it down as much as he can, although I can totaly imagine him fuming with rage upon hearing the news, especially since his fellow party member Ivo Vajgl (my favourite for the post of FM) took Rupel apart piece by piece during the election campaign (’twas a sight to remember). Katarina Kresal of LDS, the most rabid of the four coalition members is only saying that Pahor can pick whomever he sees fit. Karl Erjavec of DeSUS is maintaing radio silence.

Former PM Janez Janša has not spoken in the matter (apparently he’s enjoying a vacation) and his party is awaiting further instructions. Even Dimitrij Rupel is keeping awfully quiet. And remember, he used to be all over the news, happily giving statements and arguing with reporters if need be, even telling them flat out a couple of years ago that “it is no use picking fights with the ruling coalition”. So what is it that bought Dimitrij Rupel yet another stint in the government?

Some say Pahor is simply infatuated with Rupel. Indeed Pahor’s praise of Rupel seems to support this theory. Upon naming him, the PM extolled Rupel’s virtues, experience and connections. The whole thing was starting to resemble a Miss Universe contest. Pahor conveniently forgot that for all his years in diplomacy Rupel is still considered a walking natural disaster and that his black book of contacts probably does not include Hillary’s private cell number, making it only partially useless. Pahor also forgot that Rupel played the role of Judas a couple of times before and that he always collected his thirty pieces of silver. That Rupel publicly questioned and went against decisions by every single President this country had. And that he used to tell media what to report and how to report it. And?

Nothing. Not a single beep. From anyone.

So, let’s speculate: If Pahor were trully simply infatuated with Rupel, the two would have hugged and cuddled in public to the point of being asked to get a room. Rupel would jump up and down in front of cameras like an orangutan and bark at microfons near and far, while Pahor would try to persuade people that this time Rupel really is a new man. Given Pahor’s performance while assembling his ministers and coalition as a whole, this option seems less and less likely. Why would somene be so good in assembling his government and then fuck up in picking his advisers?

In seeminlgy unrelated news, however, the plot thickens in the Patria affair. It turned out that the initial eight APCs delivered are rusty, leaking, with paint falling off and have a not-so-new and completely inadquate complement of armament. Former CEO of Patria Jorma Wiitakorpi was re-arrested and again released, pending further investigation, which is due to finish in some three months, when the trial is finally scheduled to begin. The authors of the incrimminating programme on Finnish television maintain that they have evidence that proves that former PM Janez Janša was indeed bribed.

Now, as noted earlier, Janša is awfully quiet these days. Not only did he not comment on Rupel’s switcheroo, but did not say a word ever since Pahor took over as PM – with the sole exception of Janša’s speech in the parliament on the day the new government was sworn in. But apart from that – nothing. Niente. Nada. Zero. Zilch.

The other competing theory is, that Pahor is overdoing it with his trademark bipartisan approach. Even when he was President of the parliament (2000 – 2004) he was constantly berated by members of his own SD that he is neglecting party interests and is not pushing coalition agenda enough. Pahor usually replied that his responsibilities as President of the Parliament are chiefly to the voters and not to the party he run. This time around he took a similar approach, saying that he was elected to govern in an efficient and responsible, but not neceasrily always popular manner. Which a) is in flat contradiction with his carefully styled and non-polarising public image and b) does not explain why he chose Rupel over some other promiment members of Janša’s government. He could have chosen, say, Gregor Virant, former minister of Public Affairs who served as a state secretary on ministry of internal affairs as late as the last LDS-run government, headed by PM Tone Rop.

So, why Rupel, who is a very polarising figure and upon closer inspection does not fit Pahor’s pattern of bipartisan politics, does little to bring new quality to Pahor’s team (both “new” and “quality” being the operative words here) and is making Pahor about as popular as a fetid dingo’s kidney.

One of the reasons that comes to mind is of course the possibility that Rupel was privy to some sensitive information. Is he blackmailing Pahor? What with? Red bull? Possible extra-marital affairs? Pahor was rather frank on both counts when he blamed his mid-campaign kidney inflamation on Red Bull overdose and (on another occasion) said that he’s running for PM and not for Pope. Furthermore, why would only Rupel be in posession of such information and not other members of Janša’s government?

As a foreign minister Rupel had access to intelligence information, together with the chief of Slovenian Intelligence Agency (SOVA), the PM, defence minister and interior minister. Interestingly enough, the President of the Republic is not a member of National Security Council by default (Rop’s government took the decision in 2002 and to my knowledge it hasn’t been changed). Spy chief aside, Rupel is the only one of the above who is not directly linked to the Patria affair.

So, could it be that Rupel played the role of Judas once again only that this time around he sold Janez Janša to Borut Pahor, collecting his 30 pieces of silver in the form of a desk job charged with ore prospecting and wasting time. Under this scenario, Rupel handed over information about Janša’s involvement in the Patria affair. Either that or on Slovene-Croat relationship, where – let us remind ourselves – Janša was accused of orchestrating border incidents prior to 2004 parliamentary elections.