A lot has happened in the past week and there was no time to analyse four (yes, four) polls published in the last ten days. It is worth noting that two of them (Politbarometer, Ninamedia) were conducted prior to referendum on regions. Politbarometer poll showed a steep increase in ratings for Social Democrats, but Ninamedia poll, published only days later showed Janša’s SDS and Pahor’s SD neck-and-neck.

On the other hand, a poll by RTV Slovenia (which changed its pollster recently, BTW) was published after the results of the referendum were published and – suprisingly enough – the results more or less follow the general pattern of the other polls, at least as far as the leading two parties are concerned (Politbarometer poll being a recent exception to the rule). Furthermore, a Delo poll published yesterday confirms SD and SDS being neck-and-neck.

A detailed look reveales a lot of things. Take Politbarometer and Ninamedia polls: both were published only days appart (June 20th and 22nd respectively) but they show strikingly different results. Time again we see that it is indeed very important how you pick your sample and how do you formulate the question. Asking “which party do you feel closer to” is not the same as asking “which party would you vote for were elections held next Sunday”. Take Zmago Jelinčič’s Slovene National Party (SNS) for example: Politbarometer detects a staggering 7% support for SNS (equaling its best result since pengovsky is following polls on this blog), while Ninamedia detects only 3,7% for that same party only days later. My guess would be that Politbarometer asked questions along the lines of “who are you going to vote for”, wheread Ninamedia went for “who do you feel closer to politically” or something like that. Admittedly this is just an educated guess, but at grass-roots levels you will often hear sentences “I don’t like what Jelinčič stands for, but am going to vote for him nevertheless, as he is the only one who can talk straight”.

On the other hand, results of RTVSLO and Delo polls, suggest that referendum on regions had little or no positive effect for the government of Janez Janša. Quite the opposite in fact. Delo detects a huge boost in ratings for Zares, while RTVSLO recorded the government getting only 28 % approval rating (I’m not following ratings of the government as such – only parties – but just to give you an idea). On a larger level of things this becomes paintfully obvious if we look at combined ratings of the three left- and right-wing parties (red and yellow lines respectively): 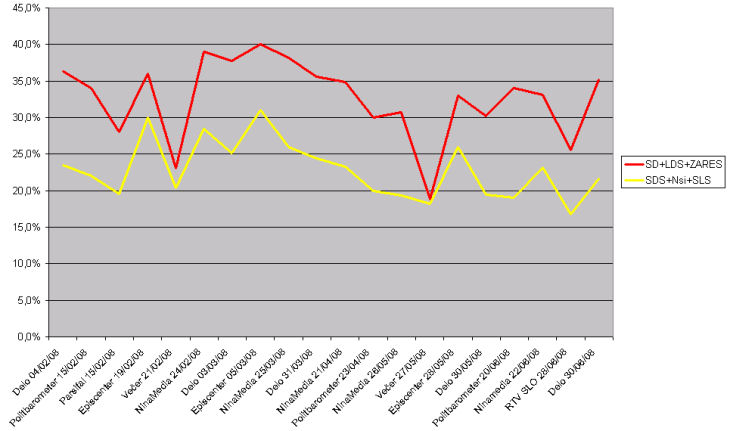 As Slovenia ends its six-month EU presidency, prime minister Janez Janša will devote all his attention to his re-election on Septeber 21st. Referendum on regions failed to deliver, but maybe a couple of more arrests will. More on this tommorow, but as not to leave you in the dark: Ivan Zidar of “Operation Clean Shovel” was rearrested yesterday, along with (now former) state-prosecutor Boštjan Penko. The latter was on the outs with current Attorney General Barbara Brezigar (who once unsucessfully ran for President on an SDS ballot, among other things) and has resigned from his office a month ago, but effective today, while Zidar is under scrutiny for months now. Both Penko and Zidar were released withouth charges, although they will probably be filed against Penko for giving private legal advice to Zidar while still in office. It was spectatular, though. More on this tommorow, as more details become known.

Pengovsky’s projection: You can see that the three left wing parties enjoy a sold 10+ percent lead over their rightwing counterparts. This means that PM Janša has his work cut out for him. Until now he has managed to basically canibalise his “natural coalition partners”, the NSi and the SLS. But as there are only so many percentage points he can skin off of them, he has to start closing the gap on the emerging left-wing coalition. And he seems to be on his own doing that, as NSi and SLS have no votes to help him with (a Catch 22!). So we will see Janša using the big guns more and more often as he is increasingly running out of time. But he is far from being defeated. Quite the opposite, in fact. As he will now be able focus solely on Slovenian politics, you can be sure that the pace will pick up here. Political bloodshed will begin shortly.