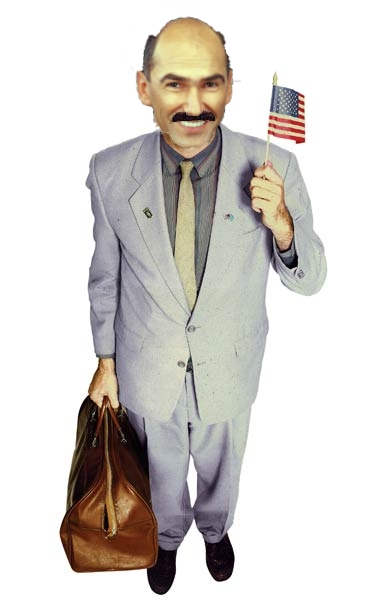 
As most of you, highly intelligent regulars to this puny blog know, the tiny Alpine country that goes by the name of Slovenia is currently chairing the EU (cue applause). Which is all fine and dandy. The more cynical amongst us (yours trully included) went “OK, let’s just hope we don’t fuck up big time“.

But, so far so good. The EU is still there, despite the fact that every multinational entity Slovenia has ever been a part of disintegrated in bloodshed.

That is not to say, however, that our beloved leadership is not working hard at raising as many eyebrows as possible – even an occasional voice…

It all started even before New Year’s takeover, when the Eternal Foreign Minister held a briefing for foreign representatives, where he was expected to outline Slovene priorities during the presidency. Instead he embarked upon sharing his version of the state of media freedom, specifically, he slammed the “petition 571” as being nothing more than a load of bollocks (not in those exact words, of course). His line of thought is detailed here.

Only ten days later, Rupel’s boss caused quite a stir in Lisbon and – somewhat surprisingly – in Sarajevo, when he said during the inaugural press conference that a) Portugal should take the whole of EU into consideration if and when voting on the referedum on the Lisbon treaty and b) that Bosnia is a bigger problem than Kosovo. More here(*).

It did not stop there, however… Later that same day it transpired that the Government Communications Office compiled a press kit about media freedom in Slovenia. This particular press kit included a document entitled Situation Regarding Media Freedom in Slovenia, which terribly skewes statements by journalists usually highly critical of this government and makes them appear as approving of the way things are. The whole thing did not go unnoticed by foreign press(*)


And it is not as if this presidency is short on problems, you know… Dubya is comming into town in mid-March when Janša and Rupel (two of his most faithful disciples) will have to press him on climate change.

Errrrr…. Mr. Bush…. I really hate to ask, you see, but, ummm… how do I say this…. our friends in the EU sort of, kindda, want to know and I really don’t know why we must be the one to say it, but…. ummmmm…. errr….. whatareyourgoingtodoaboutgreenhousegases? There, I said it!.

And there will be the aftermath of yet another derailment of the Mid-East peace process to deal with and on top of that Kosovo looks up to us to help them in achieving independence. Stat!(*)

This government has already proved its talent for shooting itself in the foot on the home terrain. It’s consistency of doing so in the international terrain is breathtakingly appaling.

P.S.: All links marked with (*) were kindly provided by Adriaan. Thanks! 🙂

18 thoughts on “Slovenian EU Presidency Stumbles In Its First Weeks”