No, this is not an attempt at a biography of a particular foreign minister, who seems to weather the weather, whatever the weather, wether we want it ot not (even though he at one point apparently was on the outs with Janez Janša). Frankly, he seems to be doing quite well in that department on his own and God forbid me imposing myself on him, the master of the sharpened pen, the prince of eloquence, the chief of quick wit. 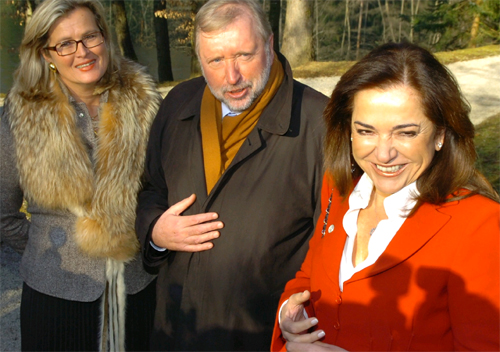 Case in point being the latest issue of Sinfo, a PR magazine issued monthly by the governmental Communications office, where the likes of ministers, MEPs and similiar publish their thoughts and inner-most meditations (Shit, we ain’t getting enough good press! What do we do? I know! Let’s issue our own magazine!). True, the phenomenon is not uknown in more familiar enviroments, in Ljubljana, for example, the municipality issues a rag aptly named Ljubljana, where Janković’s pictures are aplenty, praise is cheap and progress is measued in lightyears. Or so they say. But that’s beside the point for now…

Now, the latest issue of Sinfo (great choice of name, BTW. Fire your chief marketing officer toot-suite!), the Eternal Minister has provided the reading public with a rare insight into his curiously wired brain. In an article titled Slovenian EU Presidency under Fire at Home, Dimitrij Rupel – staying true to his “enumeration style” – took apart the rabid left-wing journalistic scum this country is apparently infested with. Piece by piece he breaks into sundust their claims of rampant censorship and political meddling with the media which (imagine the nerve!) took place for the better part of the past three years. And rewrites history along the way – now that is a sign of a true talent!

Outlining his strong involvment with dissidents in Slovena, Dimitrij Rupel convenietnly forgets that he was awarded a Fulbright schollarship way back in the seventies – and that the regime back then was rather picky about people who went into exchange programmes. As a rule, prominent disidents were excluded from (or at the very least heavily inhbited at) participapting in such programmes. Furthermore, the fact that he was able to continue his academic activites despite being involved with dissident movements, shows that he was not the enemy of the state he today paints himself to be.

Indeed, if one thing can be said of Dimitrij Rupel, it is that he was always a part of the establishment. One of his more “brilliant” examples of nursing a pole up his arse was a piece of intelectual snobism entitled “You Must Miss This” published in 1977 where he – a writer, nay, a publicist! – took it upon himself to tear to pieces, chew up, spit out and stomp on the first album by Pankrti, a punk band which quickly attained cult status (and becoming pop icons shortly thereafter). Unlike Rupel, nearly all of the more qualified people at the time (e.g.: music editors, reviewers, and the like) went delirious with excitement and gave rave reviews of the album. But they were mostly a part of what was then known collectively as The Alternative, that is to say, the alternative to the rulling party. The Communist Party.

This of course did not stop Rupel from joining The Alternative, or rather, the party which has its roots in The Alternative – The Liberal Democrats (LDS). Perhaps the fact that ZSMS (LDS’s socialist predecessor) was a part of both the establishment and the alternative played a role, but let’s skip this part as not to damage the demagogical tone of this post. Namely: in his latest intelectual bravado, Rupel boldly states (in paragraph eight) that “…the new generation of democratic political leaders and politicians enjoyed strong public support, but quite soon, in 1993, the old networks recovered and even prevailed.” and then goes on to add that “…The ‘continuity parties’ (occasionally in combination with one or other “new party”) ruled Slovenia until the year 2004.”. Which in its own right is more or less true, but for a small fact that “the continuity parties” actually took power in 1992 (and not 1993), by forming a coalition led by LDS and which included parties of Janez Janša and Dimitrij Rupel. This coalition then formed a government led by Janez Drnovšek and in which both Rupel and Janša retained their posts!.

Now, you may ask why do I quibble over a period of a couple of months? The answer is obvious – because the date inaccuracy enables Rupel to portray himself as a noble politician who never falteres and stays true to his principles – whereas in reality one cannot shake the feeling Rupel will stab as many backs as possible just to keep on to a job so dear to him.

Not that he is particuarly good at it… While in-between-radios, I worked for a small press agency Morel, just it time to witness the near-solution of Slovene-Croatian border dispute and subsequent Drnovšek’s indecision about wether to run for president. Namely: one of the journalists asked Drnovšek why does he always send Rupel to do the dirty work, and Drle replied with his-then-trademark-thin-smile “Really? I have a feeling it is more the other way around…“.

But Rupel’s rewriting of history does not end there… In paragraph nine he also fails to mention that his expulsion from the government of Drnovšek’s successor Tone Rop was due to the fact that he a) continually opposed his boss in public, b) became involved in some highly shady business of his ministry lending funds to a yet-to-be-established facutly where Rupel would be the principal lecturer and c) he attented a highly publicised oppostition rally just prior to 2004 elections in a manner higly offensive to PM Rop (Rupel namely prematurely left London, where Rop was on an official visit)…

The list is endless, and the more immerssed in detail we might become, the more inconsitencies we would find. Suffice it to note that if you allow for the date correction, Rupel’s role in the undertakings of the “continuity parties” becomes much more clear – up to the point that he was elected mayor of Ljubljana in 1994 on an LDS ballot, only to leave it prematurely for the highly prestigious post of the Slovene ambassador to the US, and then return as Foreign minister under PM Drnovšek (and – subsequently – Rop) in 2000, after a short lived Bajuk-Janša government was ousted in parliamentary elections.

But perhaps the most hillarious part of Rupel’s essay are the finals paragraphs where Rupel more or less echoes the sentiment expressed by his current boss on multiple occasions since the election victory of Danilo Türk: that the big bad media are doing everything in their mighty power to make the upcoming EU presidency a complete disaster and that they are actively conspiring with the opposition in this shameful deed. Rupel goes on, saying that “… other false reports (about discrimination of the Roma people, about violations of the human rights of the “Erased”) have been exposed and corrected.”

The fact that the Strojan Roma family are still not able to return to the land they own seems to be of little concern to Rupel, as is the fact that at least one case of the Erased is in front of the European Court for Human Rights and that Slovene constitutional court has declared that the Erased have been unlawfully stripped of their rights in 1992 by a government where Rupel served as Foreign minister and that two governments since (Rupel in both cases being the FM) have failed to enact the said decision by Slovene constitutional court.

Furthermore, Rupel laments the fact that he, the leading pen of Slovene intelligencia was recently deprived of his regular column in Delo daily. This severe limitation of his talent was imposed – truth be said – shortly after Laško brewery changed allegiances and parted ways with Janša’s politics, but the sounds that echoed throughout the country in those faithful days were actualy sighs of relief by the reading public which was to be tortured by the literary outbursts of the foreign minister no longer. I would even venture so far as to say that – given the unrully manner in which his blog posts were written, I have a strong suspicion than someone out there more-than-just-spellchecked his texts prior to publishing. But that’s just me being foul at the mouth.

So, much like Janša in his address to the parliament during the vote of confidence, Rupel took the opportunity to pound the press in a text dedicated to Slovenian presidency of the EU. The equation is simple: a subdued press equals a successful presidecy. Which in turn means the government doubts its own ability to lead the EU to the extent of pre-staging its victory podium and squashing any and all voices of dissent, no matter how founded or unfounded they may be. On that note, a small anecdote which may or may not be true, but since Mr. Rupel is bending the reality, I may be allowed the benefit of the doubt as well: when PM Tone Rop was deciding what to do with his increasingly undisciplined foreign minister, one of the options was to make him a European Commissioner, whereupon a discreet phone call was made from the cabinet of the Commission president Romano Prodi, urging Rop to send someone… well… anyone else but Rupel. Janez Potočnik was named as a replacement candidate and he became one of the most popular and successful politicians both in Brussels and in Ljubljana.

Some people think that a change in governments is imminent. But if Rupel’s writtings are any indication at all, his survival instincts still haven’t kicked in, which in turn means that Janša’s government is still going strong. Of course, all that can change rapidly. But as things stand now, the stage is set, the presidency is only threatned from within, but both Janša and Rupel have ample experience dealing with the internal enemy. And I’m sure that the act of high treason I have just commited according to Janša’s and Rupel’s criteria, would have to bring at least ten years of hard labour and listening to the collected works of both being read out loud. Shit.

However… Having wrote all of the above, I would like to take this opportunity to congratulate Mr. Rupel on yesterday’s Statehood day and thank him for his valuable contribution in a collective effort of the entire nation of creating a sovereign and independent Slovenia.

9 thoughts on “The Life And Times of Dimitrij Rupel”