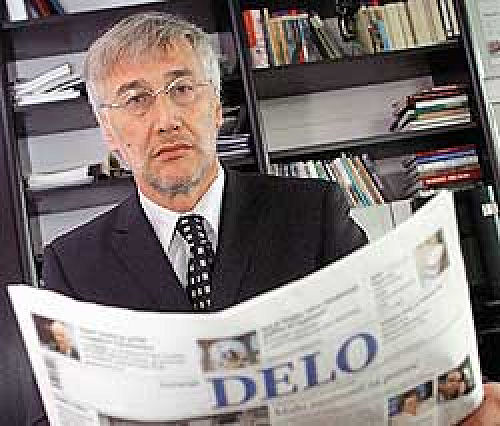 Danilo Slivnik, CEO of Delo newspaper yesterday tendered his resignation in what was a rather stunning turn of event. Thus he follows the fate of Peter Jančič, who “was resigned”, so to speak, after Laško Brewery re-claimed the paper from the grip of Janez Janša.

It is not entirely clear what percipetated Slivnik’s resignation, especially since the grapevine had it that he and Andrijana Starina Kosem, the head of Supervisory Board have managed to reconcile their differences. But apparnetly the divide was far to great for the two of them. There are only circumstancial clues as to what actually happened, but it would seem that Slivnik’s appetites grew bigger again, as the shareholders changed the company’s charter several months ago, allowing the CEO to serve as Editor-In-Chief as well. That didn’t happen and it looked that Slivnik was on the outs.

He somehow survived though, but now – only a day after presidential elections – the shareholders (meaning the board of Laško Brewery, meaning Laško’s CEO Boško Šrot and Andrijana Starina Kosem) – changed Delo’s charter again, transferring the right to name the Editor-In-Chief to the Supervisory Board rather than leaving it with the CEO. This seems so have been the final straw which broke the camel’s back and Slivnik realized that his dream of joining the two functions will not come true.

This opens up a whole plethora of political possibilities, with Editor-In-Chief Janez Markeš (once a close aide of Slivnik’s) suddenly becoming very critical of the government (and has been ever the polls started tipping the opposition social democrats as the top party), while SLS, the junior coalition partner, suddenly became immensly influential in the media, since Boško Šrot’s brother Bojan (the mayor of the city of Celje in his daytime job) is tipped to replace Janez Podobnik as leader of SLS in the comming weeks, making life very difficult for PM Janša…

…who (in related news) is apparently going to get hitched. At least the captain of his heart, Urška Bačovnik, MD said so in an interview for POP TV (Slovene only, her first live appearance ever). So the big question is – did Janez now that beforehand, or did she present him with a fait accompli… I would kindda like to think it’s the former, but who knows…

So, what happens to Danilo Slivnik? Well, now that he was replaced by Peter Puhan (until today, CEO of Slovene Railways, but in reality a trusted SLS cadre), he must embark on a long and paintful road through purgatory which might or might not end at his true master’s heels, listening to his voice. Again.