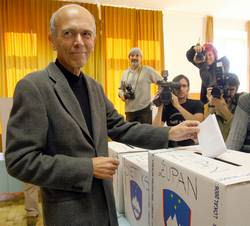 As most of you know, Slovenia is about to hold presidential elections tommorow. Of the original ten candidates, seven have actually made it to the ballot. Thus we choose between Elena Pečarič, Darko Kranjc, Monika Piberl, Danilo Türk, Mitja Gaspari, Zmago Jelinčič and Lozje Peterle. Of the seven, Gaspari, Türk and Peterle are said to have chances of making it to the widely expected second round, to be held on 11 November.


Obviously, I have my own personal favourite (and also my prediction of the election results), but I shan’t share that with you. Mostly because I think that the only wrong thing to do in elections is not to vote. So, as I intend to keep this post short, I would just like to call upon everybody who is of voting age and holds a Slovenian citizenship, to go cast their vote.

Because if you don’t, then you have – mathematically speaking – basicaly cast a vote for the candidate you wouldn’t have voted in the first place. So take a stroll down to your local polling station, take your time and put a circle around the number of your choice.

I’ll post more on the powers of the President of the Republic tomorrow around 1900 hrs (CET), when the first results are in.

4 thoughts on “Uncle Pengovsky Wants YOU To Cast Your Vote”