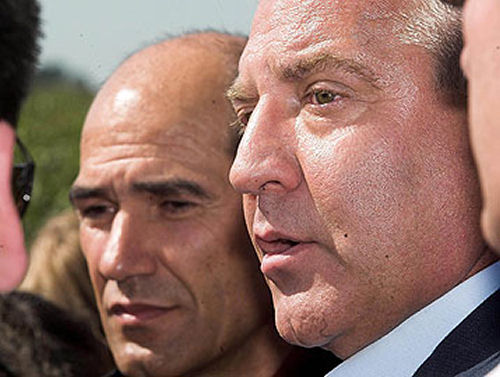 
Item One: A gang has robbed a luxurious shop with watches in BTC, Ljubljana’s shopping area. They’ve used mace to knock out salespeople and stole some € 80.000 worth of wrist watches.

Item Two: Prime Minister (an avid golfer) has seen it necesary to visit Croatian president (not prime minister) Stipe Mesić. They met during finals of Umag ATP tennis tournament. Janša apparently didn’t mind tennis, and their tete-a-tete seems to have been very important as its content have not yet been leaked to the press.

Item Three: Croatian Prime Minister (not president) Ivo Sanader is both a political rival of Stipe Mesić and an avid collector of rate wrist watches. His rather expensive hobby has recently drawn some extremely bad PR, as he sported watched worth several 10k euros, whereas people in Croatia are faced with increasing costs of living. Croatian oppostition has repeatedly told Sanader that “it is about time you resign” 😀

Item Four: Croatian Prime Minister and his Slovene counterpart, Ivo Sanader and Janez Janša have met yesterday during a football match between NK Domžale and NK Dinamo Zagreb. Again, the content of their confabulation remains confidential. But both PMs seem to have learned their lesson and have stopped talking shop over the phone. Dinamo Zagreb won 2:1.


I know rhese are just coincidences (more or less), but I can totally picture Janša giving Sanader one of the stolen watches saying “Sorry honey! I know I shouldn’t have been with Stipe. Here. I brought you a little something…”


But on a slightly more serious note: Inflation in Slovenia has risen a staggering 2,9 percent from January to July inclusive. In period from July 06 to July 07 there was an even bigger jump in prices – 3,8 percent. At the same time Ministry of Finance has said that everthing is cool and that public spending is being decreased. Which is in stark contradiction with a decision reached a month ago, to increase the budget deficit. So, who’s lying, eh?


It’s just amazing how incompetent aparatchiks can fuck up what others have put together for a decade and a half.

18 thoughts on “Inflation, Lies and Watches”