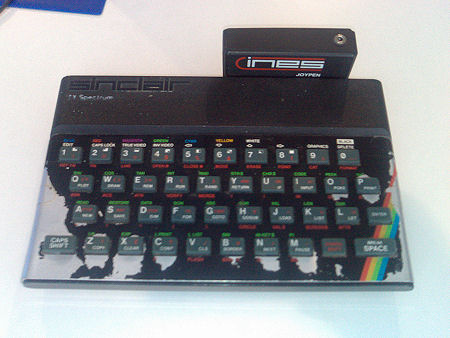 
ZX Spectrum was the first “microcomputer” which cost less than hundred pounds and my first computer ever was the version with a ludicrous amount of memory… 48 kilobytes. Yes… that is 48 kB… Just for comparison, the laptop I’m writing this post on has 1 GB of memory. That’s 2134-times more 🙂

ZX Spectrum, a.k.a. “The Rainbow” for the rainbowish stripes in the lower right-hand corner, a.k.a. “The Rubber” for its rubbery keyboard was my brush with the world of computers – which consisted mostly of playing Manic Miner. While I could never finish the game, my father actually made it, which made him the ultimate hero of our appartament building at the time 🙂

And in case you wondered: the price tag pf a Spectrum for us “Easterners” was 4.000 deutschmarks (say, 2.000 of today’s euros)… For a computer that has less memory than a lightbulb!!!! But, on the other hand, the one in the picture still works 😀


And if you want to relive the glory days of 8-bit graphics and a sound which consisted of only a varying pitch and lenght of a “beep”, visit www.worldofspectrum.org


UPDATE: Must be a computer day…. Michael M. posted some thoughts on Linux Ubuntu which apparently is not all that it could be